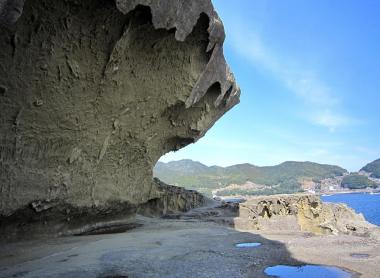 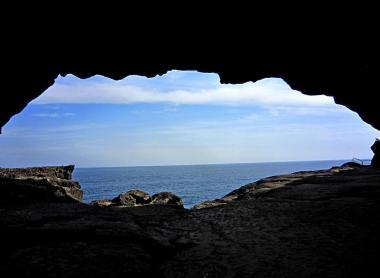 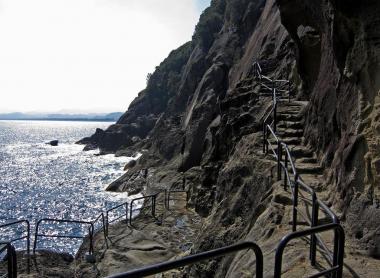 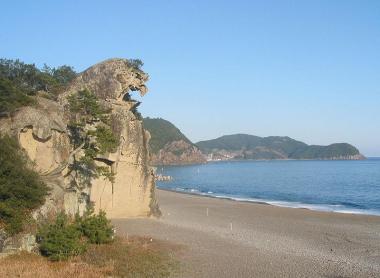 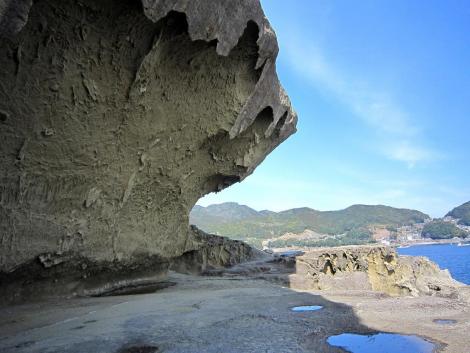 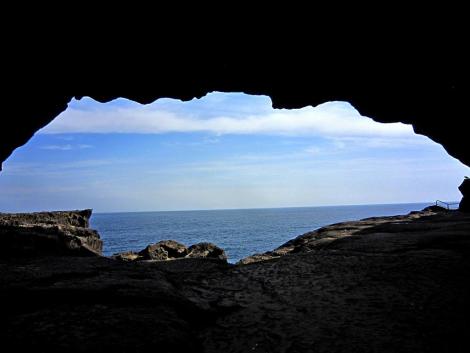 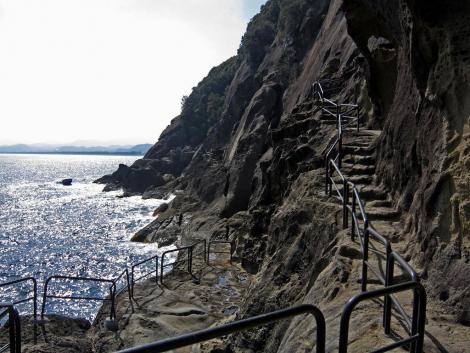 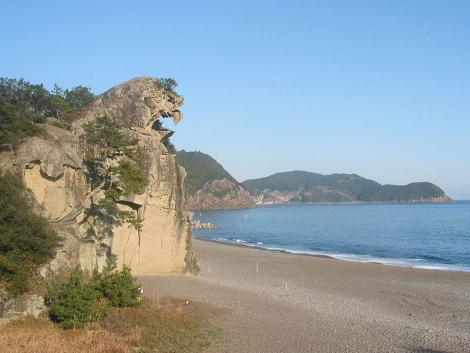 The Oniga-jo rocks, one of the most beautiful natural sites in the archipelago

Listed as a UNESCO World Heritage Site as part of the "Sacred Sites and Pilgrimage Routes of the Kii Mountain Range" in 2004, the Onigajo site in Kumano is a natural monument steeped in legends in which demons and pirates meet. This picturesque place, ideal for a nature outing by the sea of Kumano is also a renowned spot for photographers.

In Kumano, Shichiri-Mihama Beach, the longest beach in the archipelago at 22 km, offers much more than wide-open spaces for beautiful sea spray. It is indeed at the foot of it that stands a spectacular rock face called Onigajo. This volcanic rock is shaped by erosion and the elements over time run a distance of 1.2 km.

The image of a stone lacework immediately comes to the mind of visitors when looking at the many cavities that punctuate the rock, the sharp rocky points, the stone plateaus streaked with small motionless ripples, and the marks of erosion similar to the cells of a beehive on the cave ceilings.

Listed as a UNESCO World Heritage Site since 2004, the place had already been selected as one of the 100 most beautiful tourist sites in Japan in 1927 and then designated a national natural monument in 1938.

Ruins of a 16th-century castle

At the top of the Onigajo cliffs at 153 meters above sea level, there are the remains of a castle from the Muromachi period (1333-1573). Built from 1521 on the order of the chief of the Arima clan, Arima Tadachika, the fortress was the largest yamajo or mountain castle in the region.

This type of castle, built on a mountain or a cliff, had only a defensive function. No one lived inside; the yamajo was only an ultimate fallback position in case of attack. Among the ruins, there are still some stone walls and three horikiri (dry moats) on the way to Matsumoto Toge pass.

At the heart of Kumano folklore

The site as a whole; the castle, like the cliffs, is the scene of several local folklore legends. According to these stories with sometimes a little fluctuating outline, the cavities dug in the rock would have alternately or even simultaneously sheltered frightening oni and bloodthirsty pirates. The former had taken up residence there while the latter was hiding there from government authorities.

As for the site on which the castle was established, it was originally known as oni no iwaya or the cave of the demon. After the construction of the fortress, it was called onigajo (jo meaning castle); a name which later extended to designate the 1.2 km of volcanic tuff.

The hunt for the pirate-demon Tamaru

The most famous legend of Onigajo relates the hunt for Tagamaru, a pirate as feared as a demon. The general and shogun, Sakanoue no Tamuramaro (758-811) was commissioned by Emperor Kanmu (737-806) to lead the attack against the pirate who had taken refuge in the Kumano region. Aboard his ship, Sakanoue no Tamuramaro was guided by a celestial apparition who told him the exact location of Tagamaru's hiding place: Onigajo.

Arriving nearby, the general and his troops were prevented from docking by rocks that rose high into the skies and a raging sea. It was then that a young boy appeared in turn to Sakanoue no Tamuramaro to help him accomplish his mission. Stationed on the island of Mamirugashima, the boy motioned to approach with his bow and arrows. This child who was none other than the incarnation of the goddess Kannon urged the general to follow him in a dance.

Intrigued by this strange sight, the pirate-demon Tamaru cracked open the rock wall and climbed out. Sakanoue no Tamuramaro then shot an arrow with the boy's bow. This one came directly to plant itself in the left eye of Tamaru. In response, the latter released 800 demons from the cliffs of Onigajo who fell under the 1000 arrows of Sakanoue no Tamuramaro.

The Shishiiwa, the lion roaring towards the sea

Beyond myths and folklore, visiting Onigajo is an opportunity to marvel at nature and its forces. Here, the winds, waves, and seismic movements truly manage to carve the rock into unique shapes.

We also advise you to open your eyes wide and indulge in the little game of pareidolia consisting in identifying known shapes or figures in the rocks. Here and there, you will recognize sharp teeth, ogres, crocodiles, the cells of a beehive...

Not far from Onigajo, another work of nature is just as spectacular: the Shishiiwa, a 25-meter high rock whose shape is reminiscent of a roaring lion. This stone feline is a very popular spot for photography enthusiasts. At a few rare times of the year, the Shishiiwa offers an astonishing staging; that of a lion holding the sun or the moon in its mouth. This spectacle with the solar star occurs in the morning from mid-May to July; the time of year when the sun is highest in the sky. The same photograph with the lunar body is much more difficult to obtain; the full moon only shows up on the correct axis one day a month between November and January. A fleeting spectacle to immortalize!

Another opportunity to enjoy the awe-inspiring view of the cliffs and the Shishiiwa is to watch the fireworks display from boats at sea every August 17. The 170,000 people who attend each year are not mistaken!

How to get to Onigajo?

Our tours in Kumano

The Kii Peninsula is the largest peninsula on Honshu and stretches south-east from Osaka and is considered Kansai's spiritual heart.

It is just between Wakayama and Mie prefectures, in the Kiwacho region, near the city of Kumano (Mie prefecture), that the village of Kizuro is hidden.

The rural Kii Peninsula is western Honshu is an area rich in sacred mountains, hiking trails, temples, shrines and onsen.