Days of Water and Fire

The sun was setting on the evening of 12 March, 2020 as I retraced my steps of precisely thirty years ago toward the temple, Todaiji, in Nara. They brought me to Nigatsu-do, the "Second Month Hall", an ancient, wooden building, and the discovery that some things had changed. 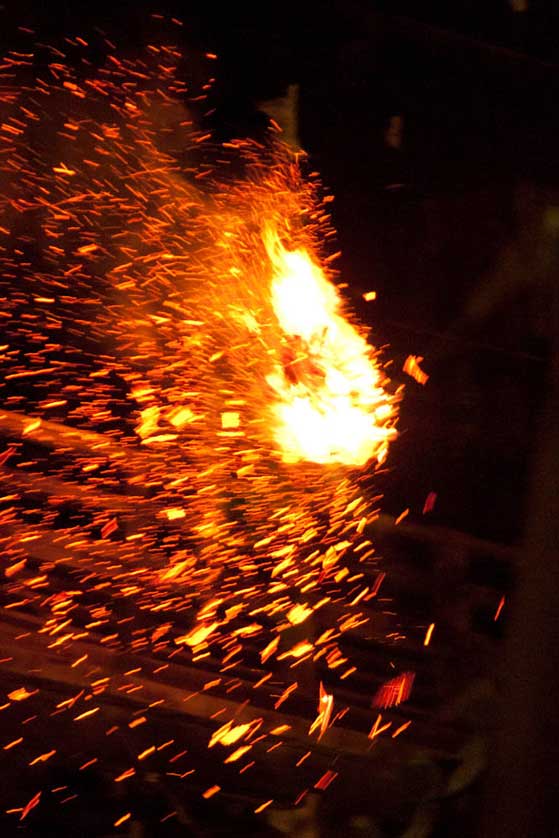 I had come for the Otaimatsu ("Great Torch") ceremony held from the first to the fourteenth of March. Young monks carry huge, flaming torches around the open balcony of Nigastsu-do, occasionally spinning them or pounding the handles on the floor releasing showers of sparks.

In 1990 the onlookers pressed in directly below the balcony because if the sparks touch you, it is said you will have good fortune the rest of the year.

Some waited outside into the wee hours of the morning while the esoteric ceremony of Dattan was performed inside. In 2020 the onlookers were kept within the courtyard, some distance from the building, and shooed away after fifteen minutes of the forty-five-minute ceremony. 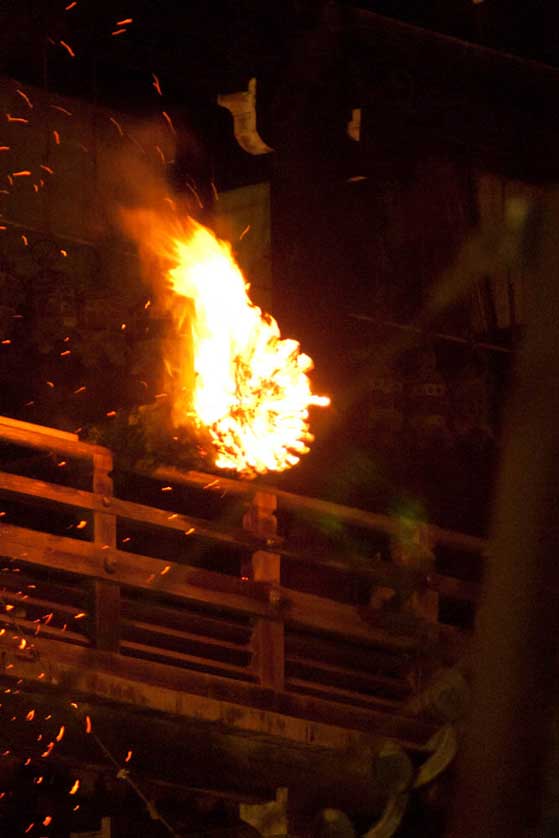 Whether their visit is short or long, Otaimatsu is the part of the ritual, commonly called Omizutori, "Drawing the Sacred Water", that most people see.

The true name of this two-week ritual of repentance and prayer is Shuni-e, "Second Month Service".

Shuni-e is intended to banish drought, epidemics, and war, to bring good luck, and to usher in the spring season. It has been performed for over twelve hundred years and comprises a number of ceremonies, most of which are esoteric and thus closed to the general public.

Some of the names here might seem esoteric, as well. Shuni-e, for example, is performed in March, not February, but in the lunar calendar it falls on the second month.

That accounts for the names of Nigatsu-do and Shuni-e, but still leaves the question of the popular epithet, Omizutori.

The ceremony, Dattan, the climax of Shuni-e, is when sacred water, which flows there only once a year, is drawn from the Wakasa Well over which Nigastu-do was raised.

But that is an even bigger conundrum, isn't it? To understand the magic water and why the well is named for a place far to the north of Nigastu-do in Fukui Prefecture, we must go back in time to the year 751 and the legendary origin of Shuni-e. 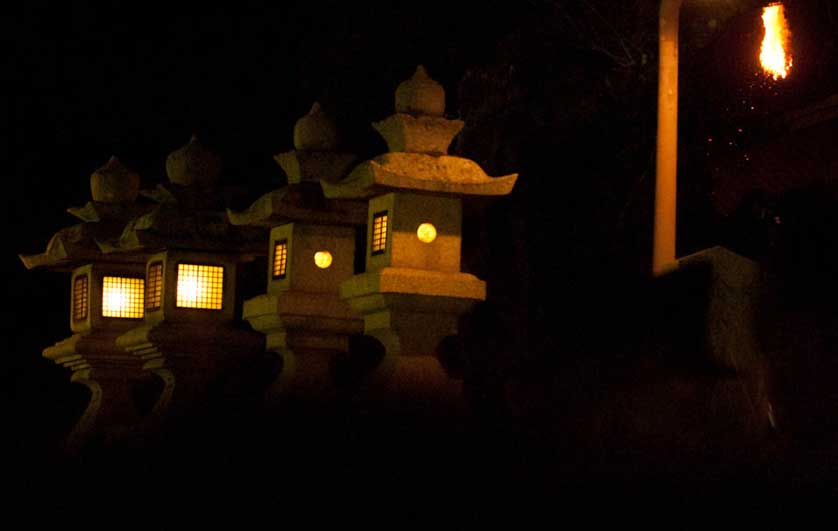 Stone lanterns illuminated by the flames

In fact, there are several of these legends, but they all contain the same main ideas. Let's say that a Buddhist priest named Jitchu was walking in a forest in Nara and came upon a gathering of 13,700 gods who had come to perform a ceremony of repentance and cleansing.

They were late getting started because one of their number, Onyu-myojin, had gotten caught up in fishing at Wakasa Bay. When he did arrive, by way of apology, he split open a rock and caused perfumed water from the Onyu River (now in Obama, Fukui) to flow from it.

With the atonement made, the gods conducted a ceremony that so impressed Jitchu that he determined to bring it into the world of men. That, he was told, was no easy proposition, for time passes at a different rate for gods and men. Jutchi reasoned that to bring the ritual into his world he must perform it 1,000 times in a day at a dead run.

In 1990. Toward the end of Otaimatsu the monks indeed ran, scraping the handles of their torches along the balcony railings. Faster and faster they went to achieve the miracle as sparks fell like meteor showers.

But the legend leaves us with another question: If Onyu-myoji called the water forth as a sorry-to-be-late-gift way back in the middle of the eighth century, why does it flow annually in modern times?

For that answer we need turn the clock back a mere ten days to March second and travel north to Obama. 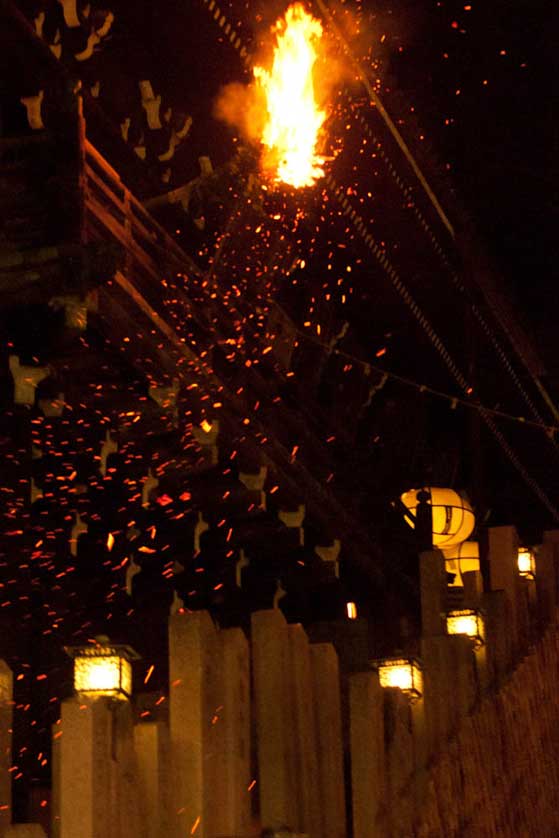 The festival has been in existence for over 1200 years

There, for as long as Omizutori has been practiced, the priests of the temple, Jinguji, in Obama City, Fukui Prefecture, have practiced Omizuokuru, "Sending the Sacred Water", also comprised of a number of public and esoteric ceremonies that culminate in a ritual of water and fire.

At six o'clock in the evening, torches are lighted and carried by both priests and lay followers in a two-kilometer procession to the banks of the Onyu river.

There, more fires are lighted and the head priest, having warded off evil spirits with a sword and incantation, pours the sacred water into the river, preserving a few drops that are mixed into a container of waters from all the previous years. So, the water begins its ten-day journey to the Wakasa Well beneath Nigatsudo in Nara. 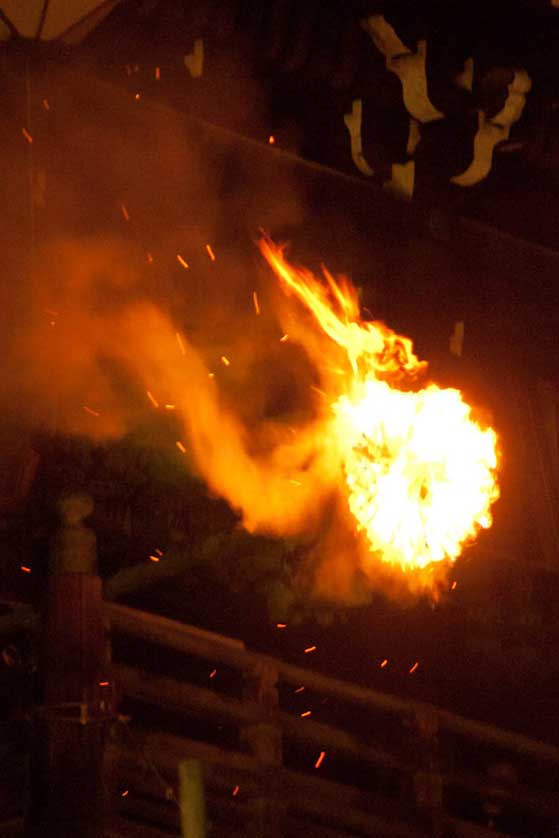 Dattan is the climax of the festival

The water completes its travel between one-thirty and two in the morning of March thirteenth and the Dattan ceremony comes to its height. In 1990 I had the good fortune to witness this offering of the sacred water to the eleven faced Bodhisattva, Kannon. To describe it in detail would go beyond the scope of this entire article, but this is the essence of what I saw.

Inside Nigastu-do are two chambers, one open to view, the other curtained off. They were lit only by candles. Chanting came from the far one and in the near, a man in white robes, at intervals threw himself repeatedly onto a board mounted on the floor (remember repentance), after which he would ring a bell that hung from the ceiling several times.

When the chanting abruptly ceased, ancient horns of a single note were played together creating eerily reverberating tones, and the man stood still.

From the dark outside came two men holding long scepters, thumping them on the floor, making their metal rings jingle. They parted and three men passed between them, bearing a cup. This party came and stood before the white robed man then disappeared into the far chamber. A moment later the man in white followed them.

Men then emerged from the far chamber in grey, white, or black robes with headdresses made from strips of red cloth. They came and went swiftly performing ritualistic tasks accented by single horn blasts.

A man in black appeared and spattered water from a bowl onto the tatami floor where another tossed out burning cinders. Men in white swept them away. More in black emerged ringing bells and shaking tambours.

Then an eight foot, blazing torch was thrust into the outer chamber and dragged around it by a man in gray, white clad men sweeping away the sparks. The torch came around again and a man in black with the man in gray leaped beside the torch while it was thrust back and forth spewing cinders, smoke, and ash while the horns blared.

Six times the circuit was made, then the torch stopped between the chambers and was thumped on the floor. In the end several men brought the torch into the outer chamber, raising it high toward the ceiling - then released it letting its flaming head crash to the floor in a fountain of cinders. The torch was hurriedly taken away and the cinders swept up.

The onlookers were then escorted out to line the porch in a kind of gauntlet through with the men, accompanied by boys carrying small torches, ran. The health and well-being of we mortals was secure for another year.

On the 14th, although the ceremony is shorter, all of the torches are presented at once, rather than one by one as on the other dates. 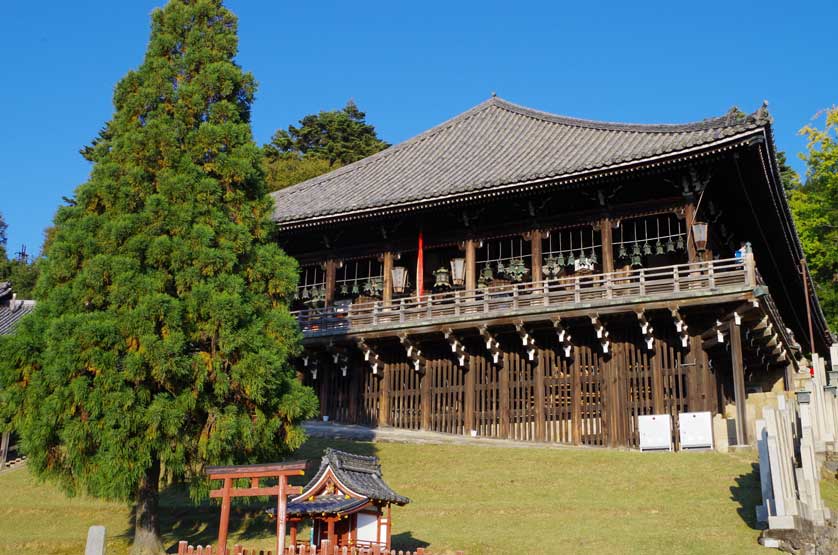 Todaiji and Nigastsu-do are north east of Kofukuji and north of Nara National Museum. Todaiji is a 30 minute walk from Kintetsu Nara Station.

The temple is also around a 45 minute walk from JR Nara Station.

Nara Kotsu buses run to the temple from both stations including the yellow Nara City Loop Line Bus #2, the #70, #72, #97 and the #160; get off at Todaiji Daibutsuden bus stop.

Admission to Otaimatsu in Nara is free.

Omizokuri opens to the public at 11 am on 2 March. The closest station to Jinguji is Higashi Obama on the Obama Line, one stop from Obama Station in Obama on the coast. There are shuttle buses to the temple on the day of the event. The fee for torches is 1,500 yen.

For over 1 200 years, Todaiji has been celebrating the return of spring by flamboyant purification ceremonies that end in a grand finale with the soothing water.

One night of May in Nara. The breath of flutes and the dull pulse of drums set the tempo. The torches bathe the actors in a golden glow. Takigi Noh exalts the sublime art of Noh theater.

Come and see over three thousand traditional Japanese lanterns, which shine for three days during this festival, which is held every year from February 3rd at Kasuga Taisha shrine.