Takahashi guide: Takahashi is a small castle town in the mountains of Okayama Prefecture. Highlights include Bitchu-Matsuyama Castle, Raikyuji Temple and Ishibiya-cho. 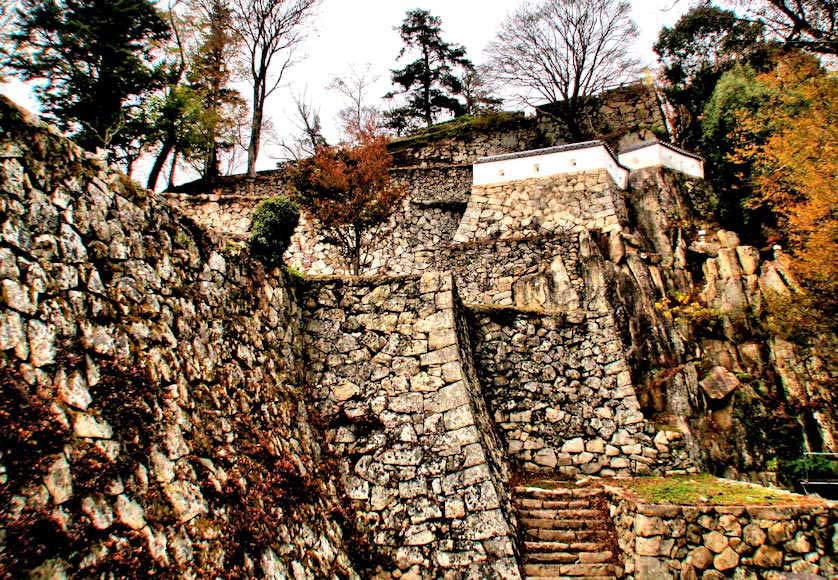 Takahashi is a small castle town in the mountains of Okayama Prefecture.

It is often referred to as Bitchu Takahashi after the former province name of Bitchu to distinguish it from other towns and cities called Takahashi.

It could easily be visited on a day trip from Okayama, but actually has enough to see and do for an overnight trip.

Situated on the Takahashi River, the town grew up around Bitchu Matsuyama Castle. Though not a very large castle, it is one of only 12 original castles still standing in Japan and is distinguished by being the oldest original castle as well as the highest. 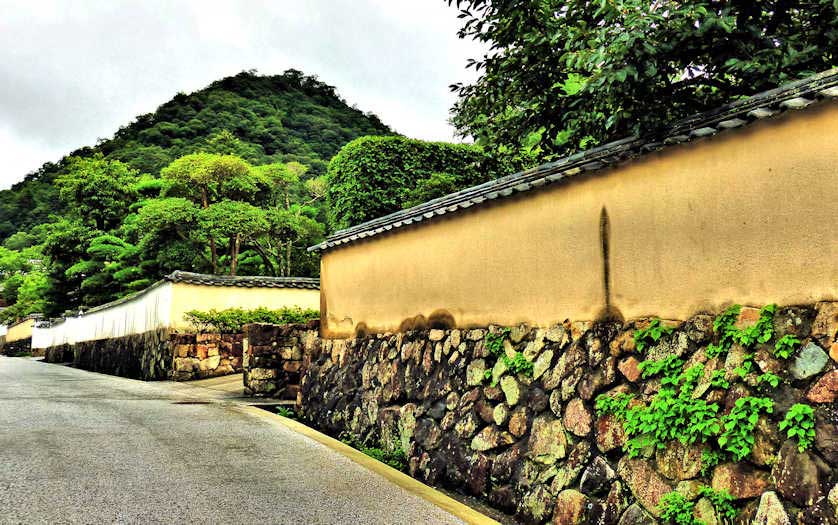 The wall-lined streets of the former samurai district in Takahashi

The castle is located at 478 meters on a mountaintop  north of the town. It is difficult to reach and by taxi or car there is still a 20 minute uphill walk, even longer from the bus stop.

It is set among trees and so the views from the castle itself are not so great, but the way up to it gives panoramic views down over the town. There was a castle of sorts here since the 14th century but the structures here now only date back to the 17th century. The keep is just a small 2-storey affair, but what is impressive is the complex, multi-layered stonework.

The castle has recently become known as a "Castle in the Sky" due to a weather pattern, mostly occurring in the autumn, when the castle is above the cloud-filled valleys early in the morning.

To this end an observation platform has been constructed on a mountain to the north east of the castle, and from here photographers gather to shoot memorable photos. It is located more than 12 km by road from downtown Takahashi and there are no buses but it is possible to reserve a seat in a shuttle taxi for only 2,000 yen return (Tel: 0866 21 0217). 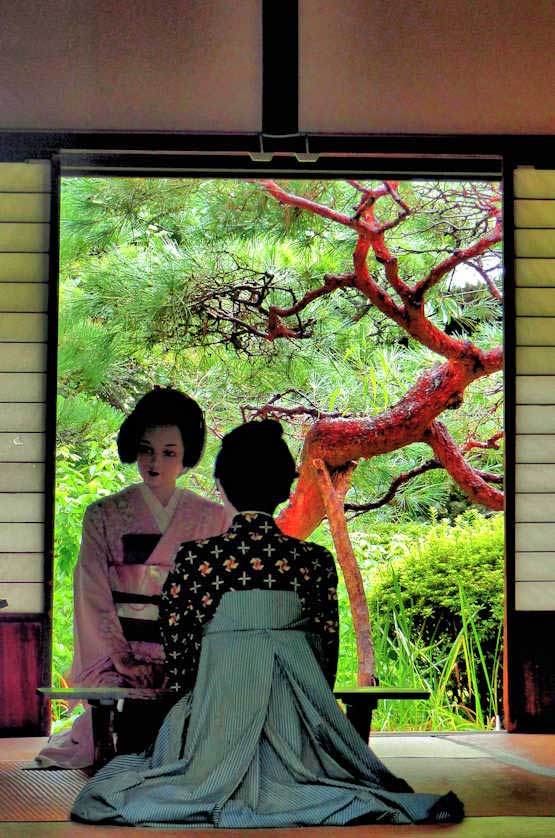 Mannequins in a former samurai residence in Bitchu-Takahashi

At the base of the mountain below the castle in the northern part of Takahashi is the former samurai district called Ishibiya-cho.

The streets here are lined with walls and gates that protected the higher-ranked samurai of the domain, and on Bukeyashiki Street two former samurai residences are now open to the public. Both the Haibara Residence and the Orii Residence are similar, being former homes of fairly high-ranking samurai, though the Orii Residence is a little larger and grander.

Both houses can be explored with all rooms open to visitors, including the kitchens and bathrooms. There is plenty of furniture and other objects from daily life including palanquins, and both houses have several small gardens.

The Orii house has some mannequins in period dress around the house and a small museum featuring armor, weapons, and other samurai artifacts. 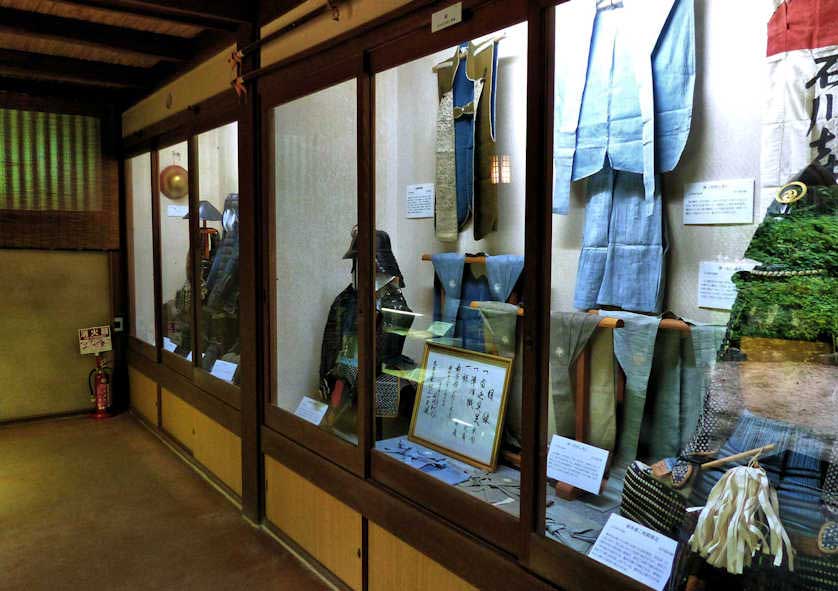 Exhibition of samurai artifacts at the Orii samurai Residence in Takahashi

A little downhill and closer to the river from the samurai district is the former merchant district. Here there are more traditional buildings from the Edo Period, and on the main street you will find the Takahashi Merchant's House Museum.

This was formerly owned by the Ikegami family, one of the wealthiest merchant families in the region who made their money from shipping, soy sauce production, and of course, money-lending.

The family resided on this site for many generations, but the current buildings were built after a disastrous fire in 1843. Inside are displays from the period, and the place is operated as a kind of rest stop and information center.

There is quite a nice garden and in the buildings to the rear lots of displays of traditional equipment related to soy sauce production. 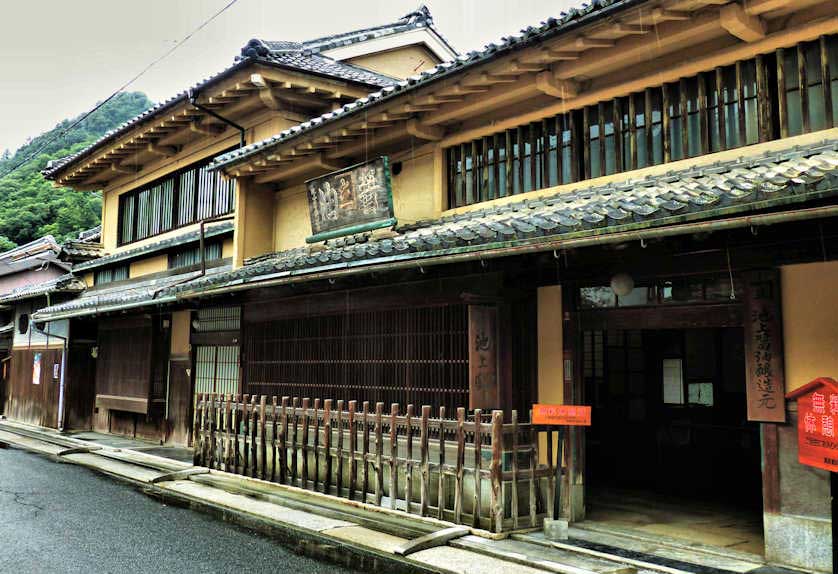 The Former Ikegami House, premises of a wealthy merchant family in the historic district of Takahashi

There are another couple of museums that would interest visitors in the town. The Takahashi Local History Museum is housed in a wooden, western-style building from the Meiji Period that was formerly a school.

Packed with more than 3,000 objects from the past few centuries including materials from local festivals. 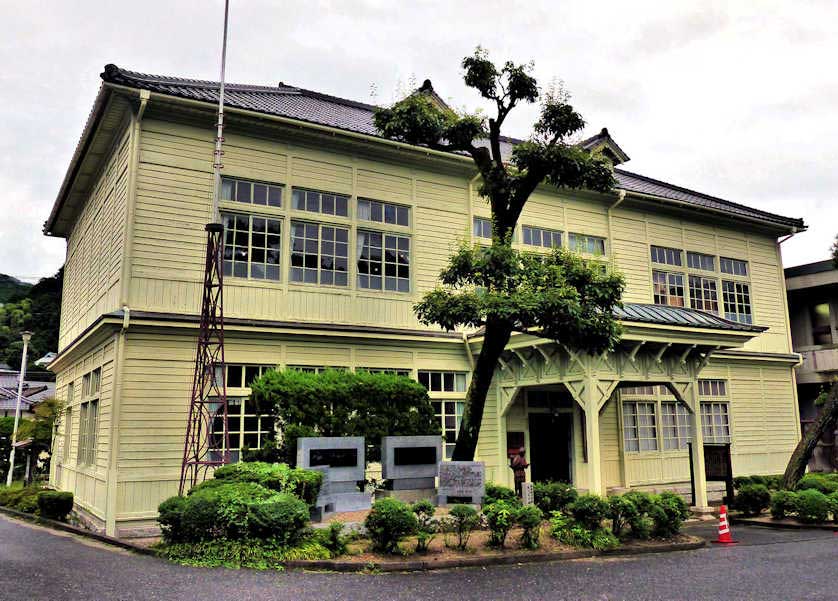 A little south of the station is the Takahashi City Museum which is a combination history and art museum.

Located on the second floor of a large, modern building, the museum has permanent and changing exhibitions including some samurai artifacts. There is little English information .

Takahashi has many shrines and temples, and like similar towns most are located along where the town meets the mountains. If you have limited time then there really is only one that should be visited, Raikyuji Temple. 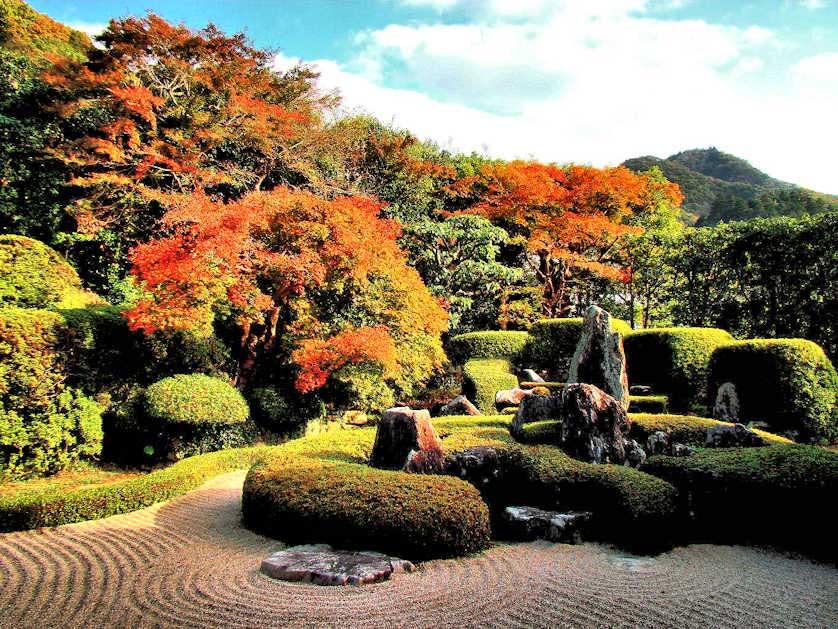 Raikyuji is a Zen temple with a couple of gardens, but the most interesting one is the karesansui, dry garden, designed by Enshu Kobori.

He was a high-ranking samurai who was involved in the construction of many of the castles and palaces of the early years of the Edo Period as well as designing gardens for the high and mighty.

While residing here in Takahashi he designed the garden at Raikyuji and is credited with the innovation of sculpting bushes and hedges to represent waves, as seen here.

He was also a master of the Tea Ceremony and Raikyuji hold classes in his style of ceremony.

There are two multi-site tickets that offer reduced entry prices. One covers the castle, samurai houses, and Raikyuji Temple for 1,000 yen, or with the addition of the Local History Museum and the Historical Art Museum, for 1,500 yen.

Outside of the central downtown area there are a couple of sites within the city boundaries worth a visit. 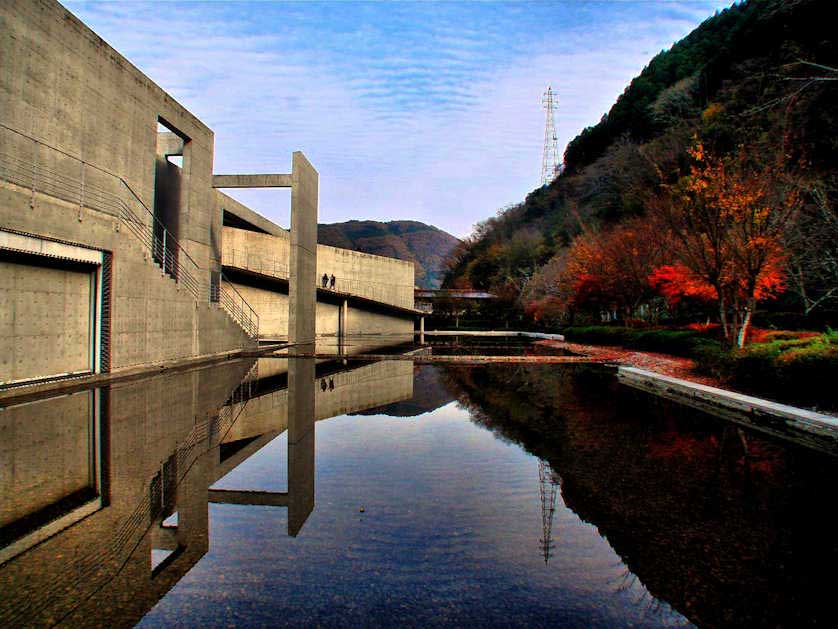 Nariwa, about 8 km east of Takahashi, and accessible in 20 minutes by regular bus, is home to the Nariwa Art Museum.

The art in the museum is not really noteworthy, primarily consisting of paintings by a local artist Kojima Torajiro, but the attraction is the museum itself.

Built in 1994 and designed by renowned Japanese architect Tadao Ando, the museum is large and features classic Ando elements like great expanses of vertical concrete, acute angles, and plenty of water-pools.

All of these combine to create a kaleidoscope of light and shadow that changes with time and as you explore the interior and exterior. If you are a fan of Ando then this is a great example of his work that can be enjoyed at leisure. 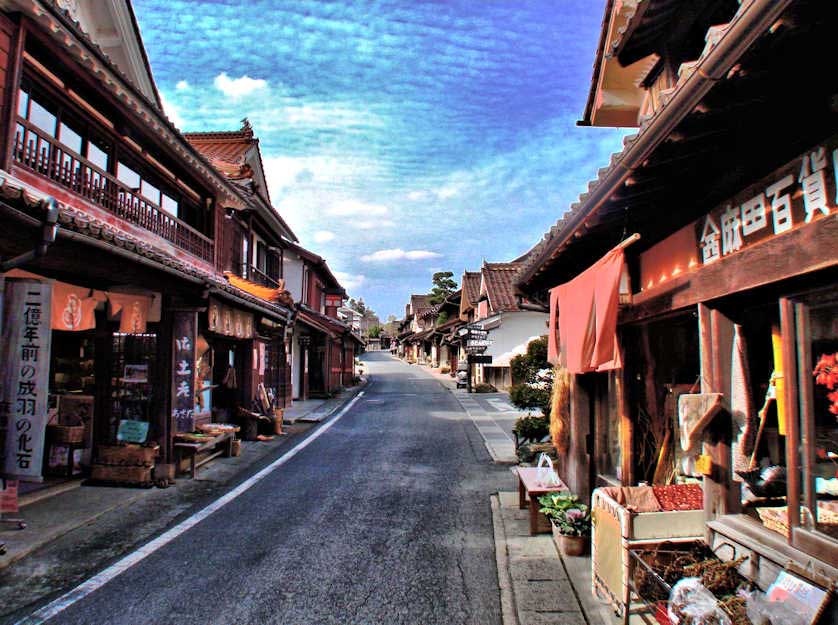 Fukiya, a mountain village near Takahashi, has a well preserved district of traditional buildings

In the mountains to the north of central Takahashi is the village of Fukiya. Built around a nearby copper mine the most striking thing about this picturesque village is the predominance of a rusty-reddish brown called bengara.

A pigment made from iron-oxide, almost everything is tinged red and has given its name to a style of arts and crafts. So many of the buildings in the village date back to the 19th century that it has been designated a Preservation District for Groups of Historic Buildings.

A 1,000 yen ticket will get you entrance to 5 different sites and many of the old buildings sell arts and crafts or serve food.

A car is the best option to reach Fukiya, though there are 3 buses a day from Takahashi Station. 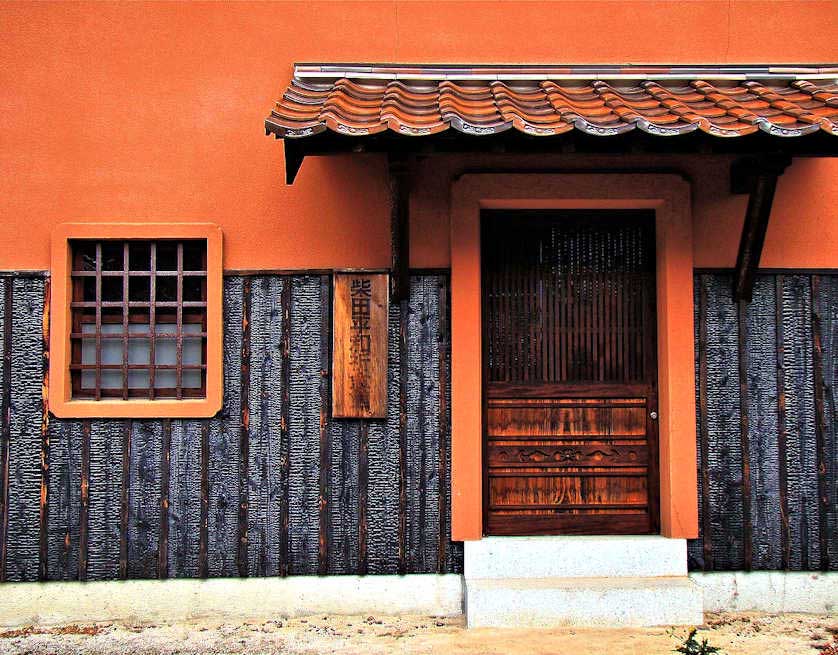 Bengara, a pigment made from iron-oxide colors everything in Fukiya

Bitchu-Takahashi Station is on the JR Hakubi Line. 30 minutes by express from Kurashiki, or 40 minutes from Okayama.

There are various hotels and ryokans in Takahashi.

Our houses in Okayama

Togiyacho Rent a house in Okayama

When it comes to Japan's most beautiful gardens, Korakuen garden is regarded as one of the best, along with Kenrokuen in Kanazawa and Kairakuen in Mito.

To reach Naoshima and the other art islands in the Seto inland sea, you'll probably need to go through Uno Port.

Ushimado is a quiet, charming resort town in Setouchi in Okayama Prefecture, facing the Seto Inland Sea and its string of islets.