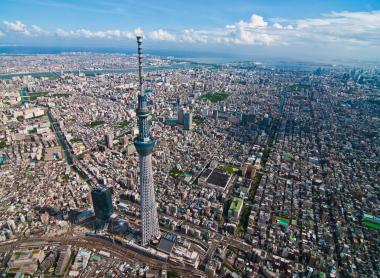 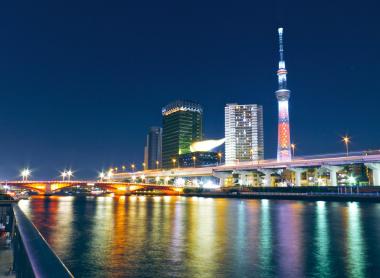 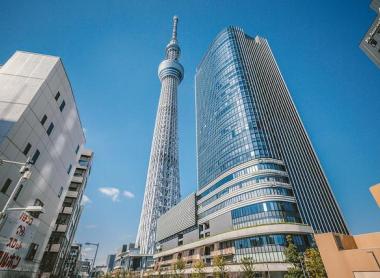 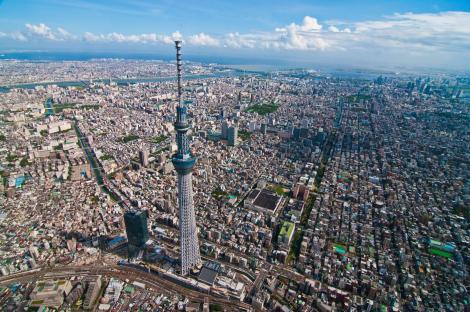 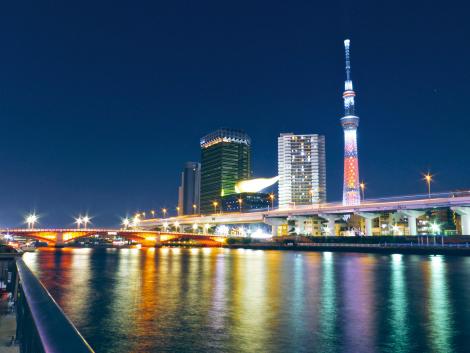 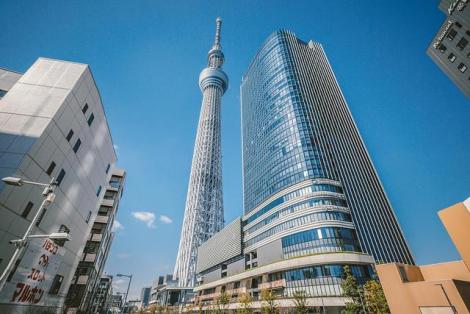 Standing on the banks of the Sumida River, the Tokyo SkyTree is a digital communications tower that carries radio and TV broadcasts. Since 2012 - the date of its inauguration - it overlooks its older sister, the Tokyo Tower, erected in 1958. From its 634 meters high, it appears as the new landmark of the Japanese capital, and one of the best observatories for observing the largest city in the world.

This "tree of the heavens", in literal translation, shelters a planetarium, aquarium, shopping center but also hotels, restaurants, and offices. We will also note the presence of one of the largest donguri (official studio Ghibli store) in the country at the foot of the tower, not to be missed. In winter, a large skating rink (the Tokyo Sky Tree Town Ice Skating Park) is there in the open! Finally, children and otakus will be delighted to know that temporary exhibitions on the theme of manga (for example Dragon Ball, One Piece, or the Attack on Titan) are regularly showcased.

The goal seems clear: to make the Tokyo SkyTree a staple in Tokyo's economic and cultural life. Today, the tower has even become an emblem of Tokyo, like the Tokyo Tower. It is also easily accessible, not far from the preserved Asakusa district, as well as the Hokusai and Edo-Tokyo museums.

Ticket sales and access to the elevators are on the 4th floor of the tower. The tower has two observation platforms open to the public: the first, at 350 meters high, called " Tembo Deck ", and the second, at 450 meters, called " Tembo Galleria ". The Tembo Deck actually includes several levels (from 340 to 350). At these observatories, visitors will have access to a café, a restaurant, a souvenir shop, and restrooms. On deck 350, you will also find a glass floor allowing you to admire the structure of the Skytree ... and the void under our feet!

Finally, a new floor was recently inaugurated: the Skytree Terrace, on level 155. So what's new? This platform is installed in the open air, and the tour is managed by a guide.

The view of Tokyo from the Tokyo Skytree

If tourists and Japanese alike flock to the observation decks on floors 350 and 450, it's good that the view of Tokyo is breathtaking. It is thus possible to have a good overview of the buildings at 360 °. Along with the windows, maps are installed to allow the curious to locate essential points of the capital, such as the skyscrapers of Shinjuku, the Tokyo Tower, or the Senso-ji of Asakusa.

The view is particularly beautiful at sunset, as well as at night. In addition, if the weather is particularly clear and the pollution low, you can admire the silhouette of Mount Fuji, which stands out in the distance.

Tokyo Skytree fares are quite complex, as they are numerous and vary depending on the day. Tickets are divided into two main categories: classic tickets, and skip-the-line tickets, which are more expensive. It is possible to go either:

Then, each ticket has a separate price between the day of the week and the weekend (Saturday and Sunday, as well as public holidays or holidays).

Here are the adult rates for the days of the week :

Tickets ("Fast Skytree ticket") can be purchased at a special window on the 4th floor, and are at a single price regardless of the day of the week:

To view all of the detailed prices (including weekend and child prices), go to the Prices page of the official website.

Note that the Tokyo Skytree is very popular: you often have to arm yourself with (a lot) of patience to be able to climb in the elevators. Try to plan your visit early in the morning, or in the evening around 8 p.m.

Finally, it is not possible for foreign visitors to buy their tickets online, because they must be in possession of a Japanese bank card.

Where to see the Tokyo Skytree tower?

The Skytree, in turn, can be viewed from many angles. The points of view are everywhere. You can admire the Tokyo SkyTree tower from the Asakusa tourist and cultural center (Asakusa Bunka Kanko Center), from the Sumida Park (Sumida Koen), or from the Jukken Bridge.

The Skytree is particularly beautiful at night, because it is then illuminated, and alternates between three colors: blue (Iki), purple (Miyabi), or orange (Nobori).

From $31 per person
Activity

South of the Ginza district, near Shinbashi, is a unique building that stands out in the landscape of Tokyo skyscrapers, the Nakagin Capsule Tower.

Cosplay has become an element of the everyday landscape in Japan.