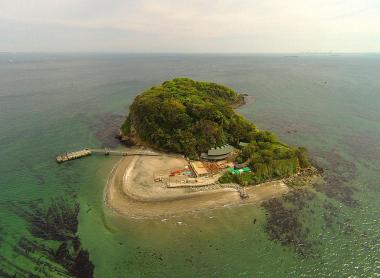 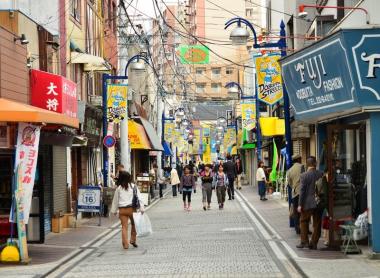 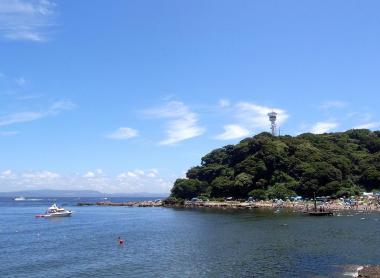 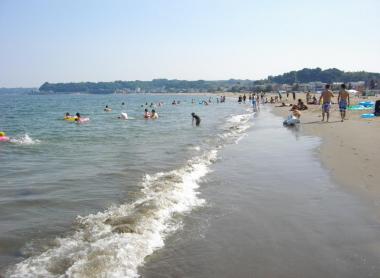 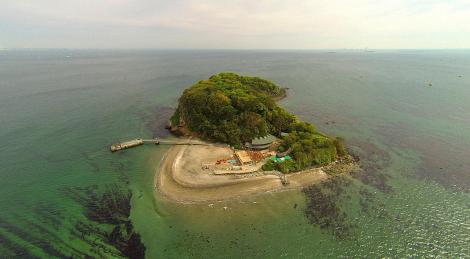 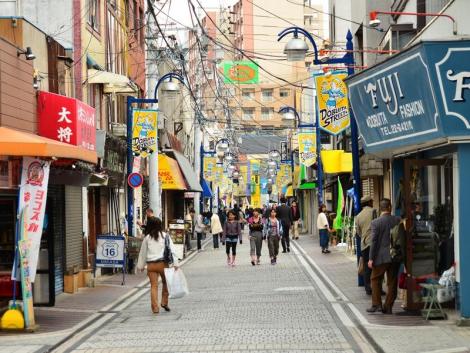 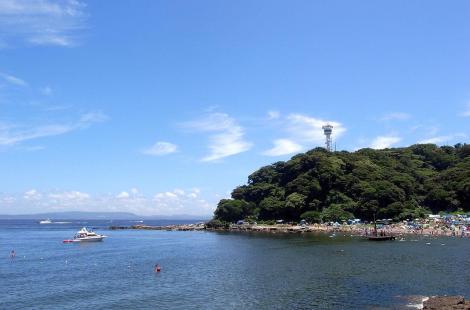 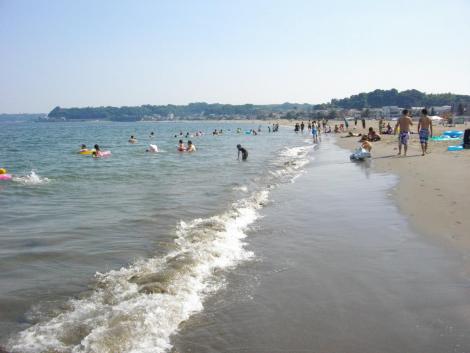 Miura: a charming peninsula and beach near Tokyo

Only about an hour by train from Tokyo, the Miura Peninsula, little known to visitors, is a rustic region bordered by rugged coastlines and spectacular views of Mount Fuji.

Located in the southeastern part of Kanagawa Prefecture, between Tokyo Bay and Sagami Bay, the Miura Peninsula (Miura Hantô), about 24 kilometers long, can be visited by car, train (partly), bus, sometimes by boat but also by bicycle. A bicycle rental system has been set up on the peninsula and it is possible to rent and return bicycles in four different places. A pleasant way to discover this pretty, relatively flat region - except in the center where a few small mountain ranges are a delight for hikers. If you are a fan of raw fish, know that Miura is famous for its red tuna (maguro).

The northern peninsula is easily accessible by train from Tokyo or Yokohama. The JR Shonan-Shinjuku and Yokosuka lines provide direct access to Yokosuka (on the east coast) or Zushi (on the west coast). The Keikyu private line, from Shinagawa or Yokohama, also allows you to reach Yokosuka-Chuo station and, further south, Misaki-guchi station.

THE EAST COAST OF MIURA HANTO

You can access from Tokyo station by the JR Yokosuka line or by the Keikyu line (Yokosuka Chuo station) to the largest city on the peninsula: Yokosuka.

Around its military port and the neighboring streets, there reigns a different atmosphere from other Japanese cities because the municipality hosts a large American base. In the famous Dobuita Street shopping alley, restaurants offer American dishes such as typical hamburgers of the city and some businesses even accept dollars! It is also possible to take a mini-cruise in the port to visit the American naval base. For those who prefer to stay on land, many attractions are on offer. It is even possible to spend a whole day visiting Yokosuka and its surroundings.

To the northwest of the city, near Yokosuka Station is Verny Park. It is a French garden that sees 2000 rosebushes bloom in the fall. The park was established in honor of Francois Leonce Verny, a French engineer who came to Japan at the end of the Edo period (1603-1868) and undertook the construction of the Yokosuka naval arsenal. He also created a school of engineers and a school of naval architecture and is behind the construction of many lighthouses, particularly in the Miura peninsula. A small commemorative museum retraces the achievements of the French engineer.

To the northeast of the city, Mikasa Park is home to the eponymous ship, a remnant of the Russo-Japanese War (1904-1905) where the ship and its fleet emerged victorious from the Battle of Tsushima. The ship is one of the "Three Great Historic Warships".

The Umikaze park (literally "sea wind") is bordered by a large wooden terrace from which one can contemplate the ocean and breathe the sea air. Its green spaces are popular for barbecues.

Off Yokosuka, Sarushima ("Monkey Island") offers a lovely nature walk and a few beaches for swimming. This uninhabited island was used as a fort to protect Tokyo Bay between the end of the 19th century and the end of the Second World War and there are still brick tunnels dating from the Meiji era (1868-1912).

Cape Kannonzaki and its large park

From JR Yokosuka Station, a bus takes you to Cape Kannonzaki (about 35 min). Transformed into a huge park, you can spend a day there walking and relaxing in a natural environment offering magnificent views of the Pacific Ocean. Several temples and shrines punctuate the path.

Kannonzaki Lighthouse, overlooking the sea and the park, is the first Western-style lighthouse in Japan. It was built in 1869 by the French engineer FL Verny.

The Kannonzaki Nature Museum offers interesting exhibits on the forests, rivers, and coasts of Tokyo Bay while the Yokosuka Museum of Art exhibits works by local artists. The building and its magnificent views of Tokyo Bay are worth the visit on their own. The museum has also been named one of the five museums with the best views in Japan.

The small town of Kurihama is home to Kuhirama Flower Park, famous for its year-round blooms. In the spring it is covered with poppies and cosmos in the fall. Trails and playgrounds welcome young and old. The city's other park, Perry Park, hosts the Perry Memorial, which commemorates the arrival and first steps on Japanese soil of Commodore Matthew C. Perry of the United States Navy.

Miura kaigan is the longest beach on the peninsula. In summer, the beach is supervised and small restaurants and cafes settle there. The beach is about 5 min walk from Keikyu station of the same name: Miura kaigan.

The area is also famous for its Misaki-Gyoko fishing port, with one of the largest tuna landing sites in Japan. There are tuna restaurants all over the area.

The West Coast of the Miura Peninsula

Going up the west coast from the far south, you can visit other sites of great beauty. Moroiso Bay, for example, is famous for its magnificent views of Mount Fuji, especially at sunset (the best season is winter when the sky is clear and the air is dry).

Underwater life enthusiasts will stop at Keikyu Aburatsubo Marine Park to admire dolphins, giant sharks, and other sea animals, while those who prefer to swim can enjoy the small coves nearby.

Hikers can walk the trails of the Koajiro no Mori forest nature reserve. This 70-hectare site, comprising more than 2,000 species of animals and plants (including endangered species) offers several hiking trails.

Travelers with children will appreciate Soleil NoOka, a huge park where many activities and attractions are offered (pony rides, boat rides on a pond, various workshops and sale of local products) and an onsen .

Going even further north, we arrive at the pretty village of Hayama with its steep coast and its dream beaches.

Then, from the city of Zushi, famous for its water sports, we can take the train back with the direct JR lines to Tokyo station.

There are several hikes to do in a single day:

- The "Alps" of Miura, depart from Zushi and arrive at Tsukayama Park in Yokosuka.
- The ascent of Mount Ogusu (250 meters above sea level) is in the center of the peninsula.
- The Miura Reef trail, along the coast of the southern tip of the peninsula.

To appreciate this peaceful and photogenic place, you can stay a night in the many accommodations on the peninsula welcoming visitors: hotel complexes, minshuku, or ryokan.

To discover the Miura peninsula in complete freedom, rent a car

The southern tip of the Miura Peninsula

The terminus of the Keikyu Line is located in the small town of Misakiguchi. If you don't have a car, you can take the bus (infrequent routes) or rent bicycles to explore the southern tip of Miura, a very quiet and rural place with beautiful coastal scenery and small fishing ports. Here, it's hard to believe that Tokyo is only an hour away by train, as the atmosphere and landscapes are so different from those of the capital!

The small island of Jogashima, the southwestern end of Miura, offers pretty coastal views, especially from Kanagawa Kenritsu Jogashima Park. Don't miss going to Umanose-Domon, a sea cave created by the erosion of rocks by the effects of waves, wind, and rain. Jogashima is connected to the peninsula by a bridge that can be crossed by car.

Always at At the southwestern end, the fishing port of Misaki, Misaki-Gyoko, is famous for its fish market (it is one of the most important tuna landing sites in Japan ) which takes place every morning as well as for its bluefin tuna sushi and sashimi restaurants, maguro.

Our tours in Yokohama

A city transformed by international trade, the Yamate and Motomachi neighborhoods give Yokohama a western feel.

The essential visits to do in Yokohama

Just half an hour by train (limited express service) from Tokyo, Yokohama, with over 3.7 million people, is Japan's second-most populated city.