The Yokosuka Line is a railway connecting Tokyo to the Miura Peninsula that forms the western flank of Tokyo Bay.

The Yokosuka Line is a railway line that goes from central Tokyo down the Miura Peninsula that forms the south-western flank of Tokyo Bay.

The Yokosuka Line therefore links Tokyo to the big cities of Kawasaki and Yokohama, the popular travel destination of Kamakura, and the city of Yokosuka.

From Tokyo Station, some Yokosuka Line trains continue on east via the Sobu Line to Chiba prefecture without the need to change trains.

See a Google Map of the Yokosuka Line: the course of the line and station locations. 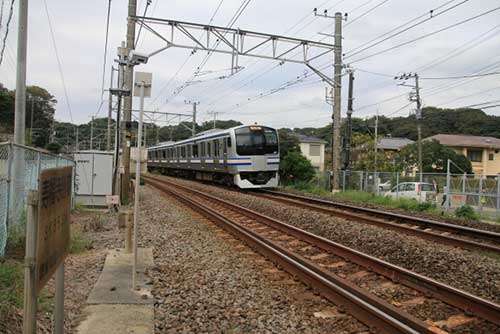 The Miura Penisula has always been militarily important because of its strategic position at the mouth of Tokyo Bay. The Yokosuka Line serving the peninsula was built well over a century ago, in 1889, to provide transportation to what was one of Japan's most important military bases.

The Yokosuka Line proper (Ofuna southwards) ran only as far as Yokosuka until 1944 when it was extended as far as its current terminal station, Kurihama, to cope with a surge in post-war use.

The Yokosuka Line underwent a major renovation in 1980 when a dedicated line was built for it between Tokyo and Ofuna. This massive project, called the "SM Separation," involved, among other things, establishing the new station, Shin-Kawasaki, and relocating the Yokohama Station building and the adjacent Tokyu Toyoko station. Yokosuka Line trains now run parallel to the Tokaido Line as far as Ofuna instead of on it, greatly relieving rail congestion.

Tokyo Station is the first station on the Yokosuka Line and provides connections to all over Japan by shinkansen, as well as transfers to a dozen other lines, above ground and subway, including the Narita Express train to Narita International Airport.

Shinbashi Station is in the Shinbashi district of Tokyo, which is where inner-city company workers eat, shop and drink.

Shimbashi Station is close to both Ginza, Tokyo's prime high-class shopping district, and the gleaming towers of Shiodome.

Shinagawa Station in Tokyo's Shinagawa ward is a major station for travelers, with numerous hotels, restaurants and recreational facilities closeby.

Transfer at Shinagawa Station to the JR Yamanote Line, the Shonan-Shinjuku Line, the Tokaido Shinkansen, the Keikyu Main Line, the Keikyu Airport Line (to Haneda Airport, 14 minutes), the Keihin Tohoku Line, and the Narita Express.

Nishi Oi Station is in Shinagawa ward, Tokyo. At the south-west end of Nishi-Oi Station is the grave of the famous Japanese prime minister, Hirobumi Ito (1841-1909).

Musashi-Kosugi Station is in Kawasaki and is in a major shopping and entertainment district.

Transfer at Musashi-Kosugi to the Shonan-Shinjuku Line, the Nambu Line, the Tokyu Toyoko Line, and the Tokyu Meguro Line.

Yokohama Station, in Nishi Ward, Yokohama City, is a major railway hub and one of the busiest stations in Japan.

Hodogaya Station is in Hodogaya Ward, Yokohama City. The West Exit is surrounded by a small shopping area. The East Exit has a walkway over the Tokaido Highway (National Highway 1) to a bus station.

Higashi-Totsuka Station is in Totsuka Ward, Yokohama City. The East Exit has a walkway to extensive shopping facilities that include department stores.

Totsuka Station is in Totsuka Ward, Yokohama City. This busy station is in the middle of a heavily built-up commercial area, surrounded by stores, malls, supermarkets, department stores and banks. Totsuka Ward Office is just out the East Exit. The Kashio River runs alongside the station.

Transfer at Totsuka Station to the Shonan-Shinjuku Line, the Narita Express, the Tokaido Line, and the Yokohama Municipal Subway Blue Line.

Ofuna Station is in Kamakura City, Kanagawa Prefecture. This 11-track station is in the middle of a heavily built-up commercial area, surrounded by stores, malls, supermarkets, department stores and banks - starting with the Lumine Wing mall that occupies the station's east exit. The Kashio River runs alongside the station. Ofuna Kannon Temple with its 25 meter (82 foot) high Buddha statue - clearly visible from the station - is just 2 minutes walk west of the river. Josenji Temple and its extensive man-made Taya Cave complex is a short bus ride north of Ofuna Station.

There is a large bus stop area on the east side of the station just south of the Shonan Monorail Station, another out of the West Exit across the Kashio River and then another just south of it.

Transfer at Ofuna Station to the Shonan-Shinjuku Line (some of which continue on to the Yokosuka Line), the Tokaido Main Line, the Narita Express, the Negishi Line, and Yokohama Line and the Shonan Monorail.

Around Kita-Kamakura Station are numerous imposing and picturesque temples, such as Engakuji with its massive bell, Shozokuin a sub-temple of Engakuji with its Shariden housing a tooth said to be of the Buddha, Tokeiji the "Divorce Temple," Jochiji with its "Nectar Well," Meigetsuin the "Hydrangea Temple," Kenchoji the "grandfather of Japan's Zen temples," Ennoji dedicated to the "Ten Judges of Hell," and various sub-temples - within easy walking distance.

The station building is by the platform for Tokyo-bound trains. Changing to the other platform involves crossing a level crossing. However, the station is barrier-free, and includes an elevator. 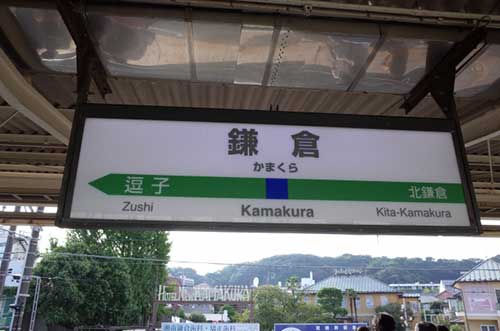 Kamakura Station is the terminal station of the Enoshima Electric Railway, next to the JR station.

Transfer at Kamakura Station to Shonan-Shinjuku Line trains and the Enoshima Electric Railway (from the West Exit).

Transfer at Zushi Station to Shonan-Shinjuku Line trains and the Narita Express. Shin-Zushi Station, the first station on the Keikyu Zushi Line, is 250 meters from the East Exit of Zushi Station. 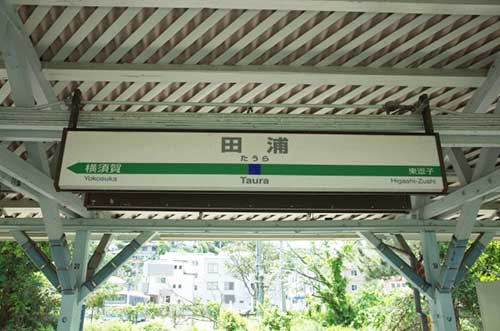 Yokosuka Station is in Hemi-cho, Yokosuka City. Just north-west of the station (as the crow flies) is the US Yokosuka military base. The station is very near the sea.

Read about the JR Rail Pass for discount tourist travel on JR lines.

Book A Tour of Japan