The Osaka Loop Line in one of the many convenient train lines that runs through the metropolitan Osaka area.

The Osaka Circle Line is one of many train lines that run through the Osaka metropolitan area. Although it does not completely cover all the major attractions of the largest city in western Japan, this line offers quick and easy access to Osaka Station, Osaka Castle, Korean City (Tsuruhashi) and Tennoji.
Please note that you cannot access Shin Osaka Station but the connection to Osaka Station is easy.

There are two tracks: the inner track is counter-clockwise and the outer track is clockwise (platforms 1 and 2 in Osaka Station).

This station is a few stations away from Yokohama's famous Chinatown with some of the best Chinese food in japan.

Take the JR Yumesaki here if you plan to visit the Universal Studios Japan (USJ). Universal Stuido Japan was the first theme park under the universal studios brand to be built in Asia. Opened in 2001 in March 2001 in the Osaka Bay Area, it occupies an area of 39 hectares and is the most visited amusement park in Japan after Tokyo Disney Resort.

Gateway to Osaka Aquarium, one of the world's finest aquariums.

A 7-minutes walk from the station will lead to osaka Dome, the city's gigantic baseball stadium, home field of the famous Orix Buffaloes team.

Shinsekai's nostalgic atmosphere makes it a must-see district in Osaka. Its Tsutenkaku Tower was built in 1912, inspired by Eiffel Tower. These old-fashioned streets are the best place to try one of Osaka 's best known specialities composed of various skewered and deep fried food, the kushikatsu. Choose night time to get a true feeling of the Shinsekai spirit.

Shitennoji can be reached by a 10-minutes walk north of Tennoji Station. The temple is one of Japan's oldest and the admission to its outer grounds is free. Nearby you can stroll down the beautiful Gokuraku-jodo alleys. This ancient garden was designed based on descriptions of the Western Paradise of the Amida Buddha.

Osaka is most famous for its large parks covering about two square kilometres, where residents and visitors can find everything they need for recreation: many grassy areas, sports facilities and a shrine. The park is also one of Osaka's most popular hanami spots during the cherry blossom season. If you are visiting during this time, don't miss the Nishinimaru Garden (¥200), a lawn garden planted with over 600 cherry trees. A teahouse and the former Osaka guesthouse offer a beautiful view of the castle.

Get a taste of Korea in the bustling downtown area of Tsuruhashi. The unique atmosphere of this place comes from the close connection with Korea that still exists, as can be seen while shopping at the international market or walking among the legions of Korean food stalls.

Next to Tsuruhashi is also Uehommachi, a historic district, which is now one of the main transport hubs for Iseshima and Nara. 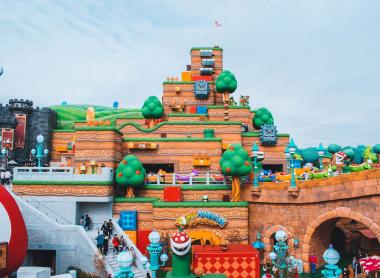 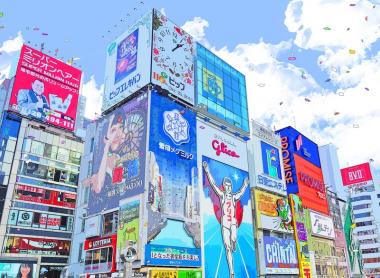 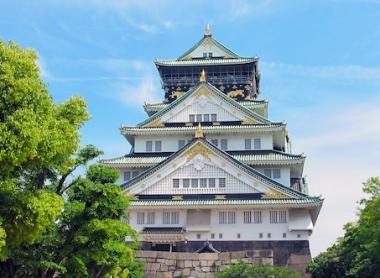 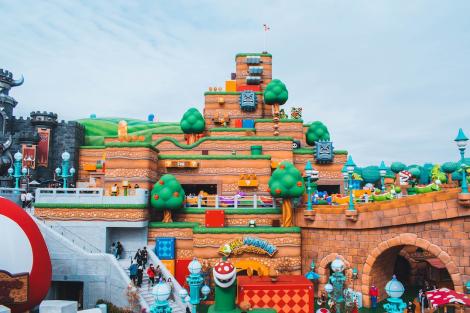 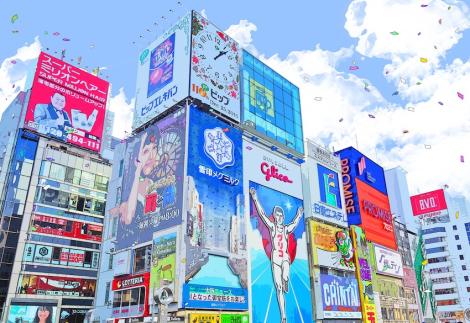 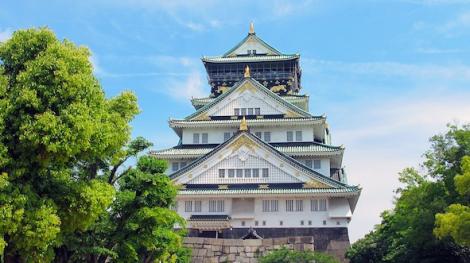 Namba - Considered the southern centre of Osaka, Namba is the busiest place in the whole city. The terminus of the Yamatoji line, Namba Station is actually a group of different stations all located in the same place.

Dotonbori is a district that never sleeps. You can go to one of its many 24-hour restaurants whenever you want. Also known as a gastronomic destination, this popular shopping and entertainment district is lit by thousands of neon lights. You can see the famous "Glico" Running Man sign and watch the giant Kani Doraku crab glow in the distance.

National Bunraku - To see one of the famous Bunraku performances usually held at this theatre, choose to visit during one of the three weeks in January, April, June, July/August and November. Ticket prices vary depending on the performance, but generally range from ¥2,000 to ¥6,000.

Den Den Town - This electronic district in the Nipponbashi district is in many ways comparable to Akihabara in Tokyo, with the advantage that here you can get a much better price. The shops in Den Den Town are usually open around 10-11am and close around 7-8pm and have many manga shops and cosplay cafes.

Kitashinchi - Those who miss the authentic atmosphere will be delighted to visit the entertainment district of Kitashinchi. Located a few minutes south of Kitashinchi Station on the JR Tozai Line, its streets filled with restaurants, bars and clubs will be a perfect break from the city's ultra-modern environment.

Osaka Tenmangu - Popular in Japan for its festival, Tenmangu Shrine (9am-5pm) is located a short walk from Osaka Tenmangu Station on the JR Tozai Line. On July 24 and 25, the shrine's deity is presented on a mikoshi (palanquin) throughout the city.

Boteju
Just a short walk from the Dotonbori riverside shopping district, Boteju is well known among locals for its excellent okonomiyaki, Osaka's famous vegetable-filled pancake. From Namba Station, exit 11, head north and turn right at the first street. The large red Boteju sign is in the second building on the right, just past a bank. Open daily from 11.30am to 11.30pm
Tel: 06-6211-3641 / www.botejyu.com/botejyu/shop/osaka_souhonten.html

Shabu-Tei
Just around the corner from Osaka's giant, ashy train station is a small shabu shabu restaurant that's been around for ages, and it shows - the waitresses wear old-fashioned apron uniforms and the walls are covered with signatures of celebrities who've been there. Great shabu shabu food with their delicious "secret recipe" sauce. From Osaka Station, cross the street and continue west, turning left into Yotsuhashi-suji. Take the first right into a small side street, past a large ashy shop. It is on the left at the bottom of this alley. Open daily from 11am to 5am, closing at 11pm on Sundays.
Tel: 06-6346-5138 / www.shabutei.co.jp/en

See all that Osaka has to offer!

Check out some of Japan's highest and deepest train stations. Order your Japan Rail Pass today!

Harajuku station (JY19) is a key station in Tokyo served by the Yamanote Line.

For each stadium of the RWC 2019, you will find our tips to access to the cities and to the stadium.