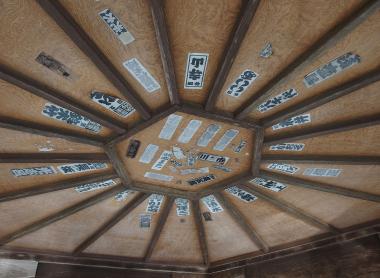 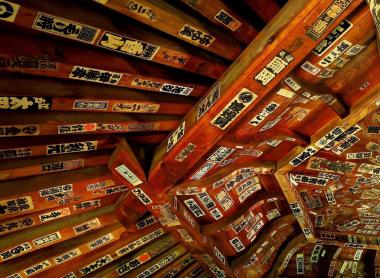 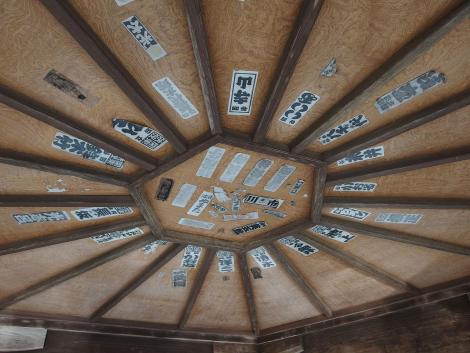 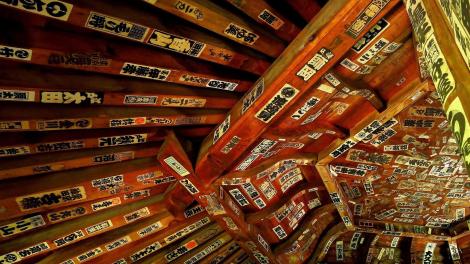 The cards that decorate a thousand Japanese temples

Japanese Buddhist temples are known for their sobriety. The brown patina of the wood, the pavilions where a solitary Buddha welcomes the faithful, the minimalist Zen gardens contribute to the serenity and simplicity of these places of worship. However, it is not rare to see doors, pillars, beams, or even ceilings of temples entirely covered with written papers: the senjafuda. Poems, prayers, ex-voto, "visiting cards", have a long history that we invite you to discover.

What is the origin of the senjafuda?

The origin of these papers called "senjafuda " dates back to the 10th century when Emperor Kazan (968-1008) stuck a poem he had written on the door of a temple.

This idea was then taken up by the nobles of the time, who had the habit of making a pilgrimage to thirty-three temples dedicated to Kannon, the goddess of mercy. These pilgrims then had their name and a prayer engraved on a wooden plaque which they hung on the doors of the temples. Later, the nobles also hung these wooden plaques in Shinto shrines dedicated to Inari, the god of rice. From thirty-three temples, we went to a thousand temples and shrines!

These pilgrimages were named senja mode (literally "visit of 1000 temples") hence the name senja (1000 temples) fuda (map) because the habit was taken to leave a prayer and the pilgrims began to stick papers on the beams and the ceilings of the temples as a pledge of piety.

From the Edo period (1603-1868), the common people began to make pilgrimages and also wanted to leave a mark of their passage in the temples visited, thinking thus to attract the good graces of the gods. They started sticking up papers with their names on them.

What had started as a mark of devotion gradually became a fashionable activity. The wooden boards were replaced by strips of paper on which one wrote his name by hand. The fashion was to stick these papers in the most improbable and inaccessible places. Humorous notes or puns were also printed and the style of calligraphy called edomoji, invented in the Edo period, especially for advertisements, was adopted.

Paper strips were in turn replaced by prints. The movement became so widespread that the shogunate of the time made a law to determine the colors and patterns of prints according to social class, just as it had done for hairstyles and patterns of kimonos!

How to stick a senjafuda in a temple?

Nowadays, in Japan, the pilgrims are still numerous. They never move without a roll of prayers, a rosary, a bell, a book intended to affix the buckets of the temples and shrines they visit ( The goshuinchô ) as well as a box filled with Senjafuda and a pot of glue to apply these last. They also carry a long telescopic and retractable bamboo pole (some would be up to 8 meters long) at the end of which are attached a brush and a large clamp to glue the senjafuda. This action is particularly difficult and requires patience and know-how.

But it is more and more difficult to be able to paste senjafuda because it is necessary to obtain the authorization of the temple or the sanctuary and to pay a certain sum. The monks do not look favorably on these pilgrims who seem to visit their temple only for the pleasure of leaving their cards there. And above all, the glue and the ink damage the wood and leave practically indelible traces once the paper has disappeared. The papers themselves take years to disappear, there are still some from the Edo period.

It is forbidden to stick your strip of paper on heritage-listed buildings or to stick it on another already in place. The rule is to stick as high as possible but nowadays space is scarce...

Despite these restrictions, however, there are still some craftsmen making prints like in the Edo period. Their cost is high (more than 20,000 yen for 200 pieces) because their making requires the work of three people: a calligrapher, an engraver, and a printer.

One can also find ready-made senjafuda, with the most common surnames and which are sold much cheaper in certain temples and shrines where they are authorized, in certain bookstores, or even on the Internet.

Where to see senjafuda in Japan?