Heian Shrine Gardens: the Shin-en Gardens of Kyoto's Heian Shrine cover about 8 acres and were designed by Ogawa Jihei and later Mirei Shigemori. 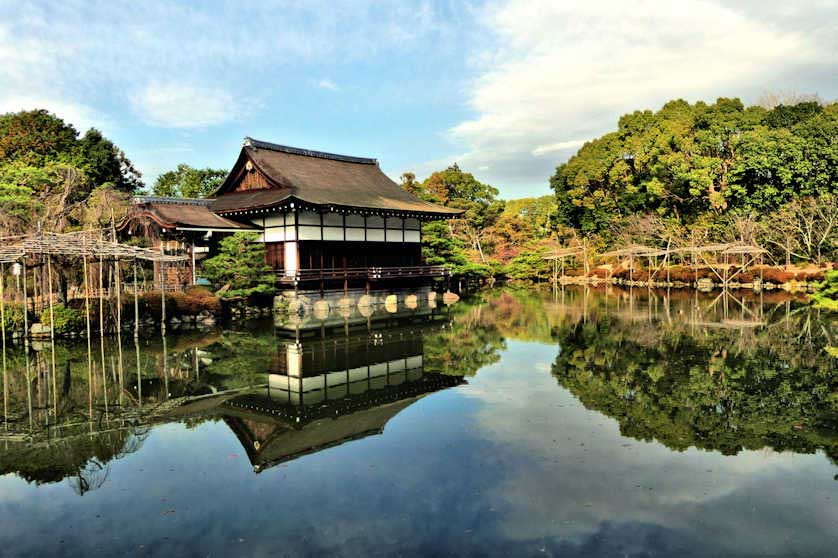 The Shin-en Gardens at Heian Jingu Shrine in Kyoto are among the biggest gardens in a city renowned for its gardens, and yet also one of the least well known.

Covering about 8 acres, Shin-en Gardens means "garden of the gods", and most visitors to this popular tourist site are unaware they exist, hidden as they are behind the main structures of the shrine.

Towering more than 24 meters over the approach road to the shrine, the vermilion torii, entrance gate, to Heian Jingu Shrine is a well known landmark in the Okazaki area of the city and visible from miles away.

It, like the shrine itself, is a modern construction. The shrine was  completed in 1895 as a monument for the Industrial Exhibition Fair held that year which also marked the 1,100th anniversary of the founding of Heiankyo, the original name for what is now called Kyoto, in 794.

It is a replica, though at a reduced scale, of what was called the Chodo-in, the Great Hall of State, within the Imperial Palace during the Heian Period. It was designed by Ito Chuta (1867-1954), the preeminent architectural historian of the time. Like much of the architecture and culture of this time it is heavily Chinese in style and appearance. 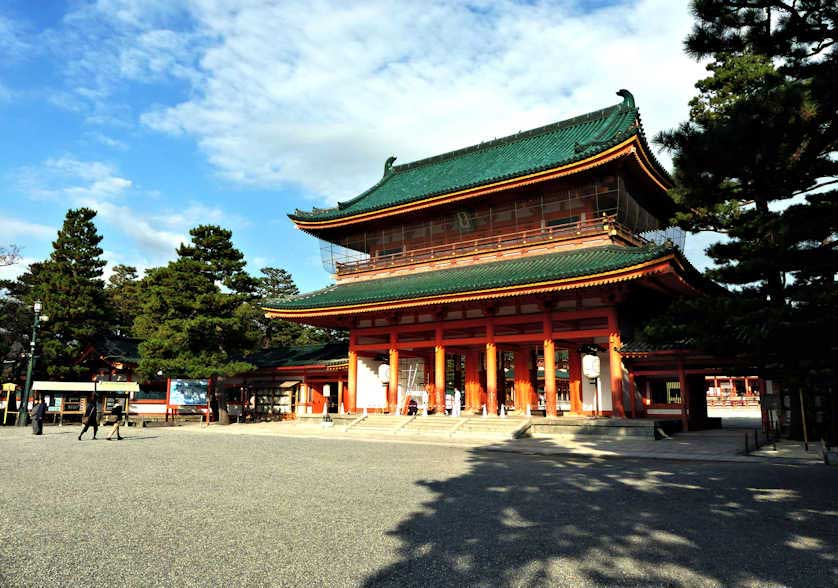 Following the end of the Fair it was converted into a Shinto shrine and Emperor Kanmu (736-806), the Emperor who oversaw the move of the capital to Kyoto was enshrined here. Later, in 1940, Emperor Komei (1831-1867) the last Emperor with Kyoto as the capital was also enshrined here. 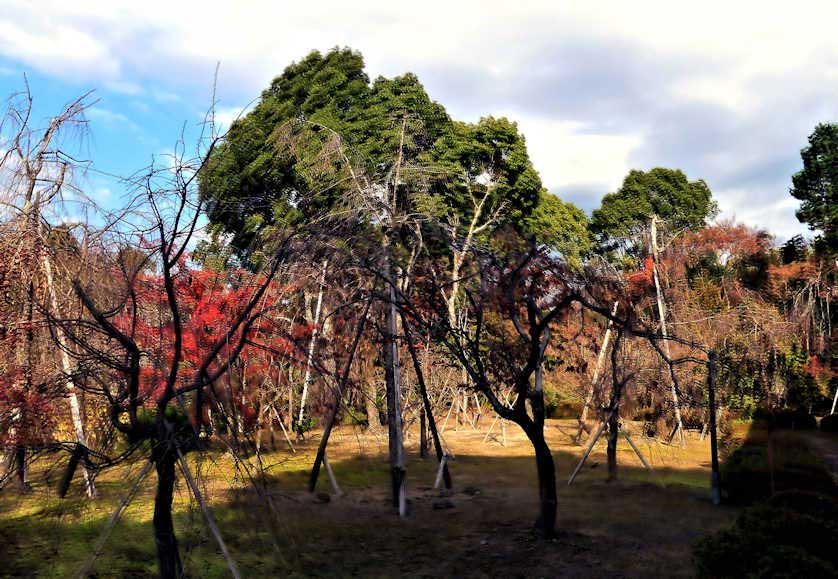 Features of the Gardens

The gardens however, took many years to be completed. The designer was Ogawa Jihei VII, the young head of a famous lineage of garden designers in Kyoto.

The garden is primarily a stroll-type garden, the kind that became popular in the Edo Period. Many of the most famous gardens designed for the great Daimyo of the Edo Period like Kenroku-en in Kanazawa, Koraku-en in Okayama, or Ritsurin Koen in Takamatsu are of this type, and tend towards what we might call parks.

Ogawa also incorporated other features of Western garden design including plant species that were not common in Japan. One of his prime concerns was to create a garden that would be enjoyable at any time of the year. 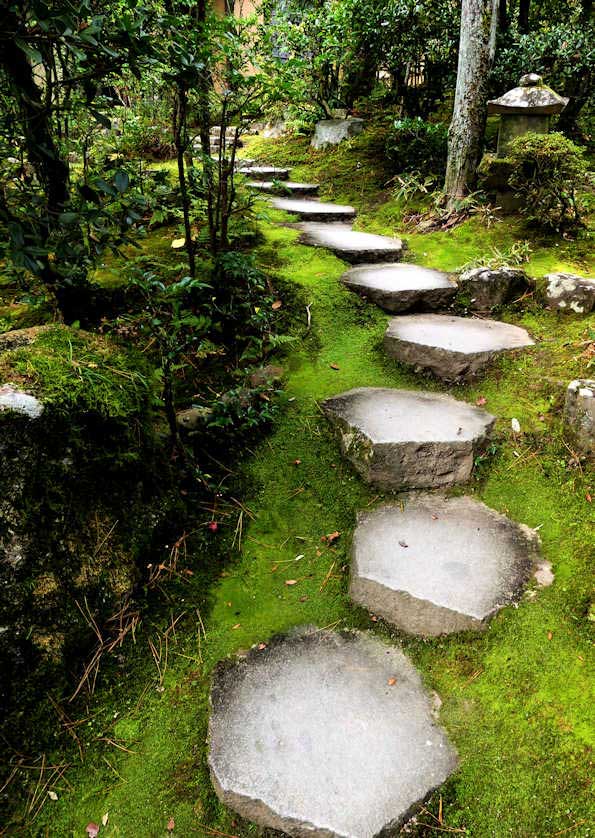 Shin-en is divided into four gardens, each with its own features. You enter through a gate in the northwest corner of the main shrine compound and the first garden is the Nishi Shin-en, the West Garden.

The first part is more like a western park than a traditional Japanese garden, with paths leading through groups of small trees, bushes and shrubs. However, here you will encounter a most unusual sight, an old streetcar!

Kyoto opened the first electric streetcar line in Japan in 1895, the same year Heian Jingu was built, and though they had disappeared by 1978, this one car tucked away in the garden is a reminder.

As you follow the path you pass a series of large stepping stones that lead up to a small tea house called Choshin-tei. When it is open you can take a break here and enjoy a green tea.

These stones were once used as foundations for bridge supports, and later in the garden you will see even larger examples now used as stepping stones across one of the ponds.

At the northern end of this first section you will come to Byakko-ike, a pond with water lilies growing in it and also surrounded by hundreds of irises. June is the best time to see these in bloom, though in April the large number of cherry trees in the area are also in full bloom.

From here a path follows a meandering stream to the Naka Shin-en, the Middle Garden. Both of these first two gardens date back to the first construction of the shrine.

Here you find the Soryu-ike Pond, a little larger than Byakko-ike but also with a range of different irises and also water lilies. A line of Garyu-kyo, former foundation stones for the Sanjo and Gojo bridges that crossed the Kamo River lead out to a small island in the pond. On the south side of the pond is a small cafe that serves tea, traditional snacks, and coffee. 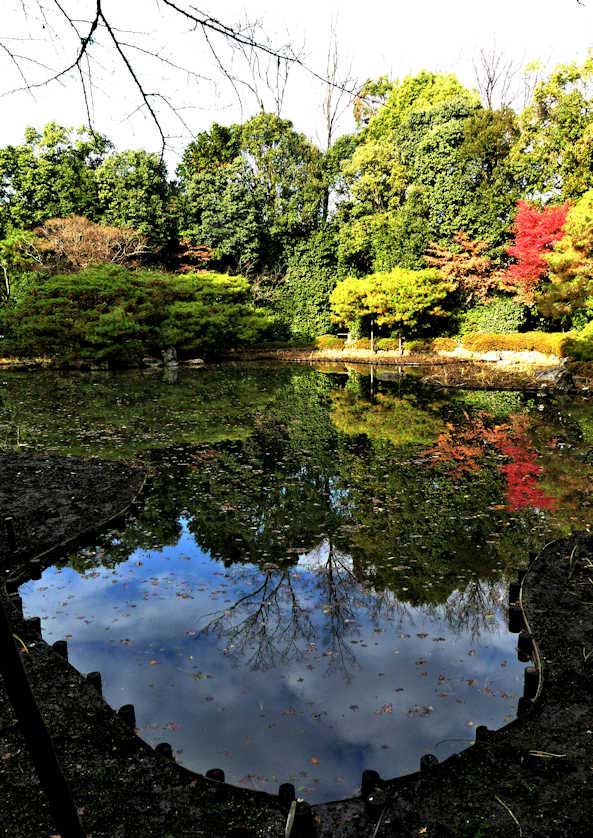 South of the Middle Garden is the East Garden, the Higashi Shin-en, featuring the largest pond, the Seiho-Ike, in which you can see koi and turtles. This garden was not completed until 1912.

On the far shore of the pond is the Shobi-kan, originally built in the Imperial palace grounds in the Meiji Period. It was dismantled and reconstructed here as a guest house. It is sometimes used a setting for evening concerts. Under normal circumstances it can not be entered, though please check below in the section of the Event Hall for details of how it can be visited.

You cross the Seiho-Ike Pond on the Taihei-kaku, a long covered bridge and probably the garden's most notable feature.

Once on the West shore the views over the pond include the Higashiyama hills behind as "borrowed scenery". From this part of the garden and also from the Taiehei-kaku, you can look over the most recent garden here, the Minami-Shin-en or South Garden. 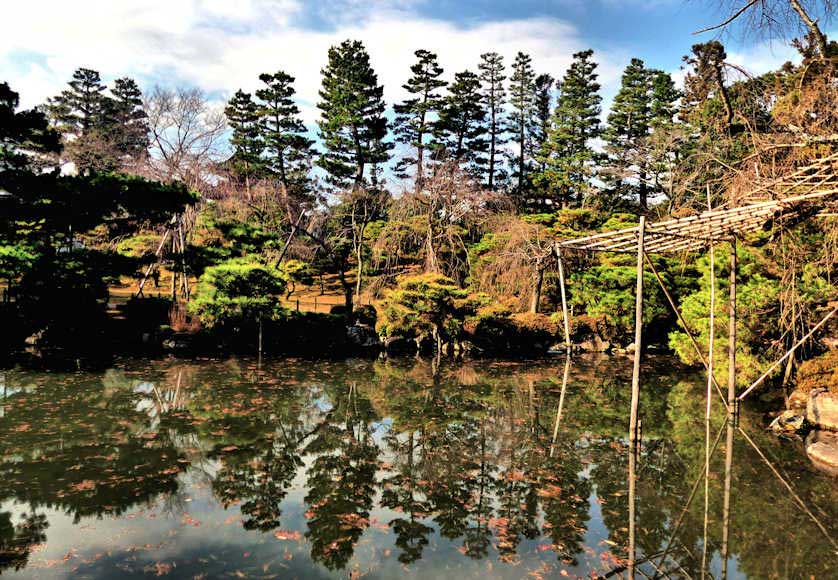 It was not completed until 1981 and was designed by the famous modern Japanese gardener, Mirei Shigemori. It is very much in the style of a Heian Period garden where aristocrats would gather for parties involving poetry composition and recitation, and the garden can best be appreciated by making a visit to the Heian Jingu Event Hall.

This is used for many kinds of events, but mostly wedding receptions, but it has a public restaurant serving lunches and dinners from where great views of the garden can be had.

They also offer a variety of plans that include a tour of the garden with entrance to the Shobi-kan. Full details at the link below or by phoning 075 752 3435 - heianjingu.com/en/party/plan 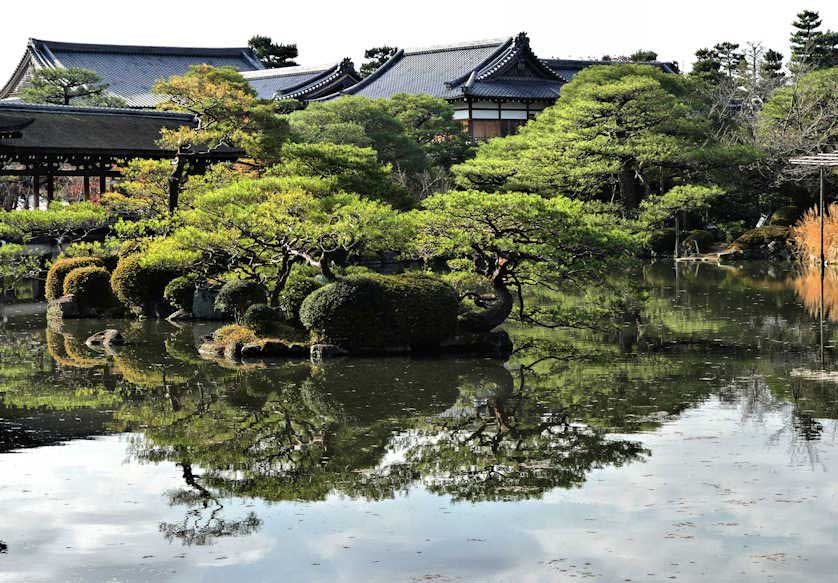 Seiho-Ike Pond, the largest pond in the gardens at Heian Jingu

Heian Shrine is on Jingu michi a short walk from Higashiyama Station on the Tozai subway line. A 15-minute walk from the Sanjo Station on the Keihan Line. Bus #5 to Kyoto Kaikan Bijutsu-mae stop or take the Raku Bus #100 also from Kyoto Station. 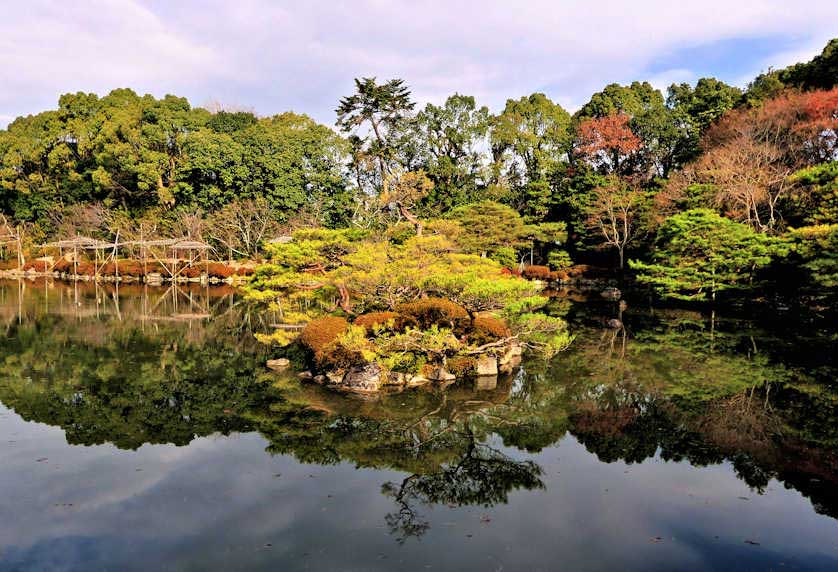 Enjoyable at any time of the year, the Shin-en Gardens at Heian Shrine in Kyoto

East along Marutamachi is Okazaki Jinja and the entrance to Kurodani Temple. Just beyond the junction of Marutamachi (east-west) and Shirakawa (north-south) is the Philosopher's Walk. 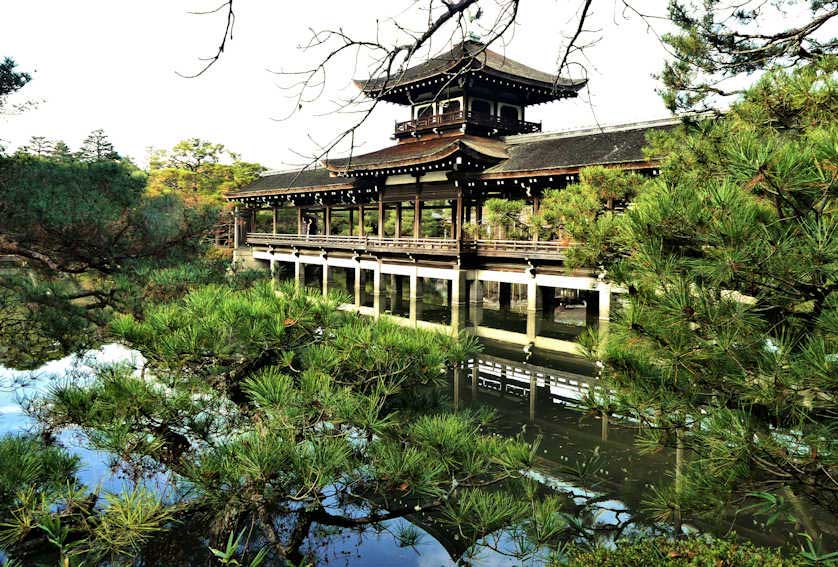 Emperors, empresses, princes and concubines lived for centuries behind the walls of Kyoto-gosho. Today the former imperial palace welcomes visitors and transports them back in time.

Katsura Rikyu, situated in southwest Kyoto, is one of the two Imperial Villas in the ancient capital (the other is Shugakuin Imperial Villa).