Kiyomizu-dera Temple, a must-see in Kyoto

Kiyomizu-dera is a very popular place to visit for visitors who want to discover Kyoto's history. Built on a hillside in the Higashiyama district, east of the city, it offers fantastic views of Kyoto. Since 1994 this temple has been listed as a UNESCO World Heritage Site.

The Kiyomizu-dera complex is home to both a Buddhist temple and a Shinto shrine. It was built in 780 and rebuilt in 1633 after a fire.

Visiting the Kiyomizu-dera site is particularly popular with tourists in the fall and spring. The reward after finding your way through the maze of narrow shopping streets of Gion and making ​​the difficult ascent up the hills of Higashiyama is the intense, red details of the Deva gate that provides a striking contrast with immaculate white walls.

The wonders don't stop after this first discovery, the western gate hides a three-storied pagoda spire made of forged metal. The first building, the hall Zuigu-do, is then on the left. It offers  very strange experience that delves into the spiritual mindset needed to tackle the mysteries of the temple, a UNESCO World Heritage Site.

With a coin and the removing of your shoes, access to the uterus of Daizuigu Bosatsu, the mother of Buddha, is open and accessible to you. In darkness, the sensory experience culminates to reveal the incredible vision of an illuminated stone allowing fulfill a vow by turning on itself. Upon leaving this "womb," visitors will likely feel beyond perplexed, but the strange Zuigu hall is interesting enough to want to get better acquainted with the other secrets of Kiyomizu-dera.

Not to be missed in the heart of Kiyomizu-dera

It is only after passing the halls of Zuigudo and Kaizando that the path to the main building appears. The buildings on the left should not be ignored, as they host a lovely garden and the building of Jojuin, often neglected by tourists but deserving of attention, if only for the green lotus flowers and roses that dot the paved roads in summer. Take note of the dragon fountain Seiryu, the origin of the Seiryuue festival in March, April and September. Once you have paid your entry fee into the temple, the show is breathtaking.

The Main Pavilion of Kiyomizu-dera

The main pavilion, or Hondo, stands on a wooden platform mounted on stilts at a height of two meters above the precipice.

The panorama encompasses the city of Kyoto, magnified by the heights, the abundant vegetation in the area, it is especially beautiful in spring when the cherry blossoms or autumn, when the maple leaves glow.

Rest assured, rails protect the unwary from a fall that, according to legend, had many lovers succumb seeing a consecration of their passion. It was not, however, in most cases fatal, because the shrubbery broke their fall.

The Hondo has a bronze statue of the bodhisattva Kannon, the eleven heads and one hundred arms, known for her compassion. Like hundreds of the Japanese who entered with you, light a candle for the health and happiness of your family.

The temple of "pure water"

At the end of the main building is a great opportunity for lonely souls in search of true love. The Jishu shrine has two stones separated by eighteen meters. It is said that if a person manages to travel the distance with his/her eyes closed, the chances of finding your soulmate are greatly increased. If successful, but guided by the voice of a third person, you will need an intermediary to find this soulmate. Many young people often try desperately to complete this task!

The final stage of the Kiyomizu tour the place where the temple earned its name. The Otowa waterfall at the bottom of the stilted terrace comes only after walking down a flight of stairs. It alone attracts a swarm of tourists visiting the temple. Its sacred water is reputed to have healing properties and good fortune. Divided into three streams of water, it may be drunk through a long, metal ladle, sterilized by UV light. Each stream has a different associated virtue. One brings academic success, another longevity and the last, success in love.

Upon completion of this tour, for those who wish to pursue an adventurous experience, a path runs through the woods to reach the three-story pagoda Koyasu visible from the platform, popular with mothers as it is known to help facilitate childbirth. 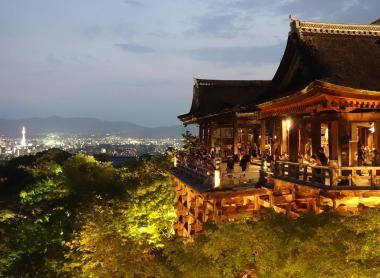 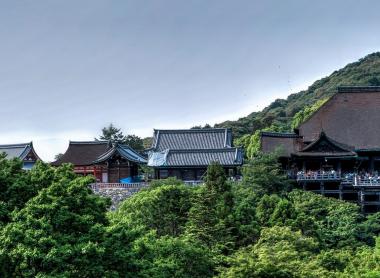 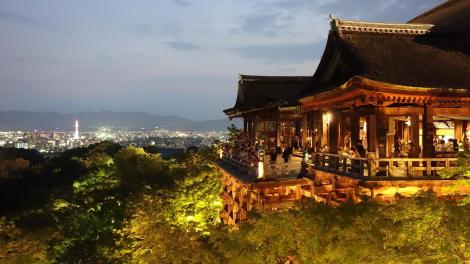 Kiyomizu's biggest fans like to repeat their visit in the spring, in August or during the fall, when it is open in the evening and illuminated by multiple lights. These events heighten the temples' mystical impression and Kannon's aura is felt even more.

Also to be discovered in Kyoto:

Located in the south-east of Kyoto, Tofukuji is a large open temple complex, with 23 sub temples. The temple is famous for its stone and moss gardens and has the largest Zen temple gate in Japan.