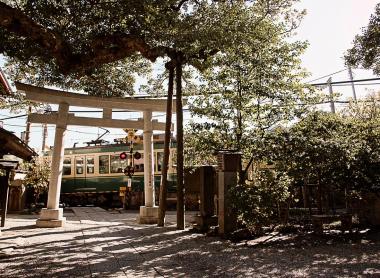 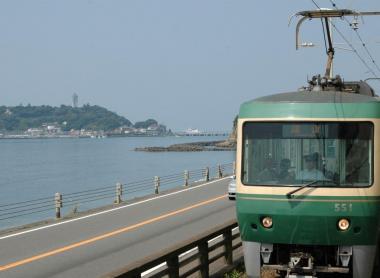 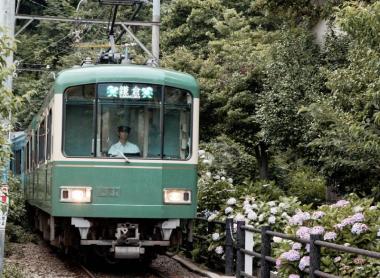 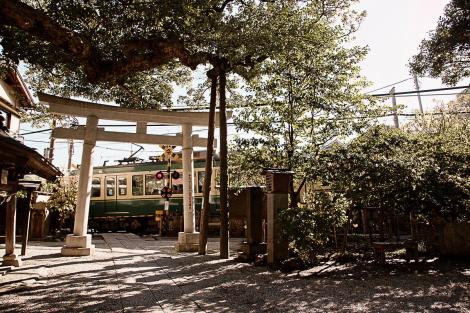 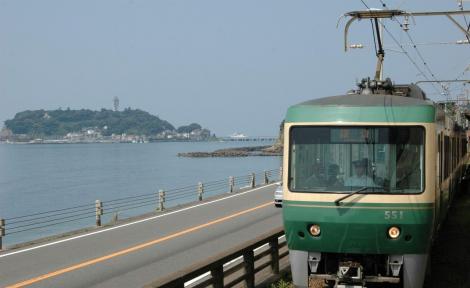 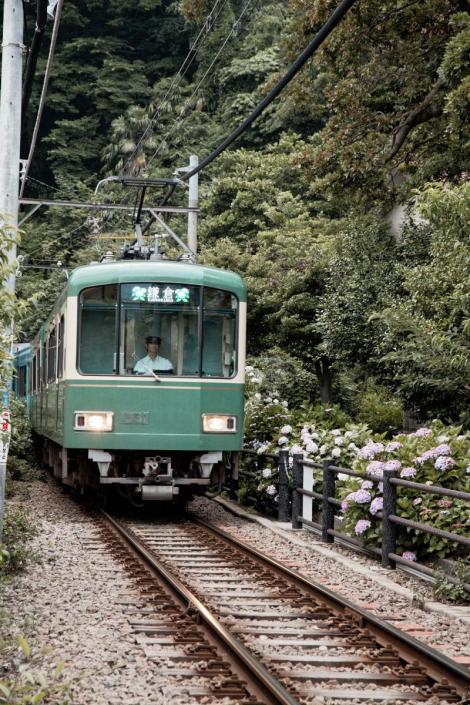 A single track that winds through local neughborhoods, travels through old tunnels, runs along part of the coast bordering the Shonan Sagami Bay, and whose ancient looking cars stop at small stations each more picturesque than the other.

Enoden (short for Enoshima Dentetsu, Enoshima Electric Railway in English), today carries thousands of passengers, and offers a pleasant and quiet way to visit some of the most emblematic places of the city of Kamakura.

Between it and the island of Enoshima, each station is a journey. Each stop offers a different landscape.

From station to station

Appointment with history and Buddhism in Hase, where the iconic Daibutsu (Great Buddha) and the imposing wooden statue (over 9m) of the goddess Kannon with eleven faces of Hase-dera Temple attract crowds of religious and non-religious.

In Gokurakuji station, one discovers a darker and greener atmosphere concealing the Gokuraku-ji temple, very visited during the hydrangeas season (to avoid in June!).

Soon after, the stations of Inamuragasaki and Shichirigahama reveal the seaside appearance and photogenic Kamakura.

The view from the beach is beautiful, with the island of Enoshima, and on clear days, Mount Fuji looming in the distance. If the weather is nice, go at sunset to see the distant mountains cut through the flaming red sky and Mount Fuji basked in this atmosphere.

Fans of the manga Slum Dunk, will stop at Kamakurakokomomae, where the crossing represented in this manga can be found, and has since then become very touristy!

Finally, Enoshima, the legendary island. The island has kept a small quaint side with magnificent sea views, the chain of Tanzawa Mountains and Mount Fuji. The station is far from the island but the walk is nice.

Before entering the station, the train passes the Ryūkō-ji temple entrance (the "mouth of the temple of the Dragon"), built in honor of the famous monk Nichiren. Perched atop a wooded hill and flowers, the complex includes several buildings, including a pagoda built in 1910, the only one in the region.

The stations between Enoshima and the terminus in Fujisawa does not lead to any tourist sites, but they provide an overview of the lifestyle of the inhabitants of this region that borders the sea.

The Top 10 to visit Kamakura by our Travel Angel, Isabelle

The unrevealed and side roads: Isabelle, our Travel Angel with more than 20 years of experience on-site, reveals her ten favorites in Kamakura.

Enoshima Island is a fun, resort island in Sagami Bay off the coast of Kanagawa Prefecture close to Kamakura. It is within reach of Tokyo.

Its name means "hot water", and sure enough onsen are on offer at this resort, along with sea and coastal views that have attracted famous writers over the years.