Izushi is a small, historic, castle town in the countryside of northern Hyogo Prefecture.

Though only a few hours from the bustling cities of Kyoto and Osaka to the south, Izushi is not directly on a railway line or major road and so has been spared much of the development and modernization of much of Japan.

As a result, it has retained much of its history and has a surprisingly wide range of sights, attractions and activities that appeal to most visitors.

However, you will not find hordes of other tourists nor long queues and high prices. 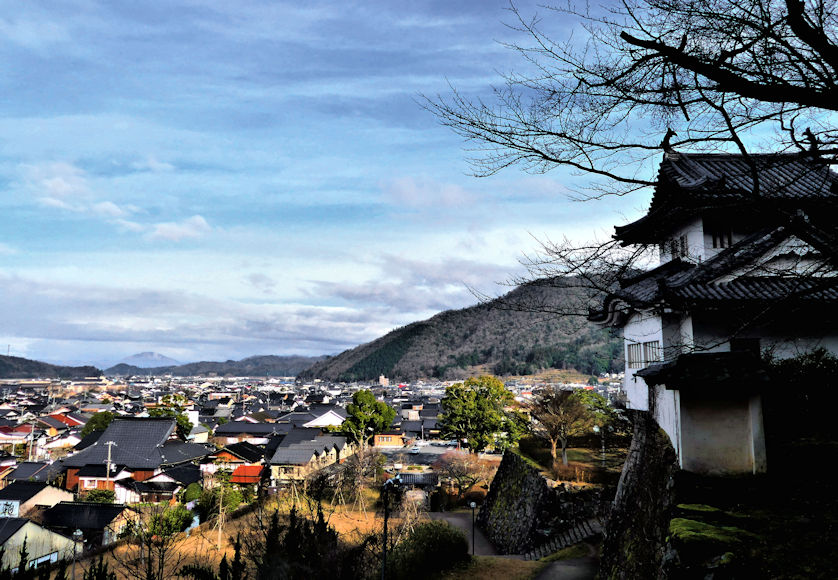 Izushi, a historic town viewed from the grounds of Izushi Castle

What to See and Do in Izushi

The town grew up around the castle which was built originally on top of the 325 meter high Mount ariko.

This castle was abandoned early in the 17th century and a new castle built at the base of the mountain. Like most Japanese castles, Izushi Castle was itself dismantled not long after the Meiji Restoration of 1868 but a couple of yagura, towers, and a gate have been reconstructed.

The grounds of the castle ruins are planted with many cherry trees and so are a popular spot for cherry blossom viewing or hanami in Japanese.

There are several shrines within the grounds, the most picturesque being an Inari shrine with its long "tunnel" of vermilion torii gates leading up to it. From the castle you have great views looking over the town. For those with a deeper interest in castle history a footpath leads up the mountainside to the ruins of the original castle. 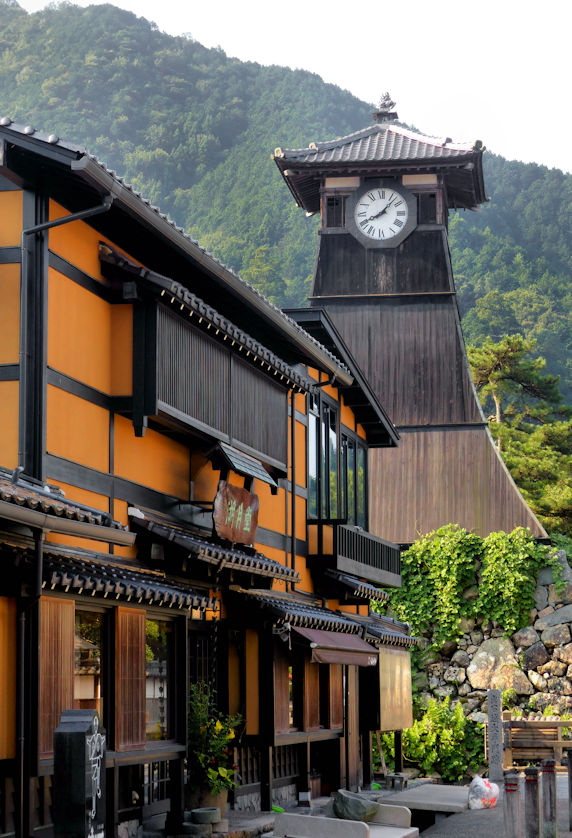 Looking over the town is a clearly visible landmark, and icon of the town, the Shinkoro Clock Tower.

It was built in 1881 and is possibly the oldest clock tower in Japan. Around its base is a section of the old castle moat.

Izushi is home to many historic buildings and is still laid out as it was in the Edo Period. It has been registered as an Historic Preservation District of Groups of Traditional Buildings and so is a great place to simply explore on foot.

Your first stop, therefore, should be the local tourist information office where you can pick up leaflets in several languages as well as a useful walking map of the town. 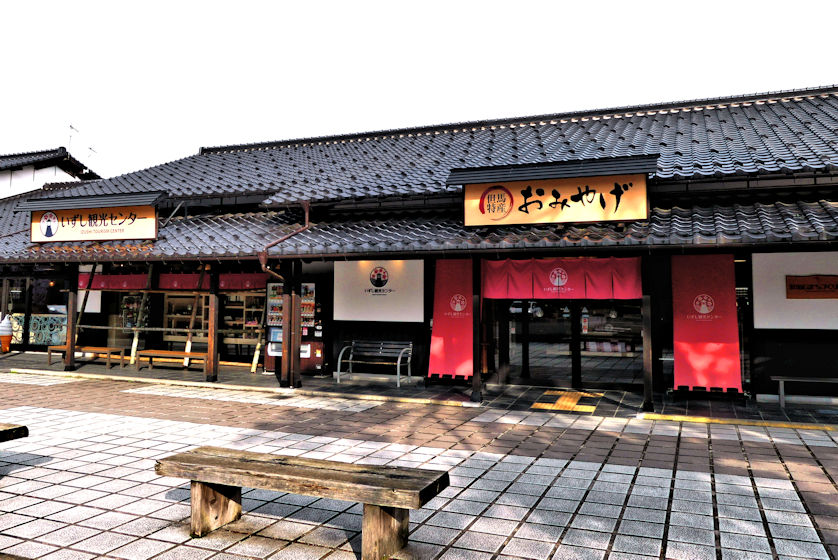 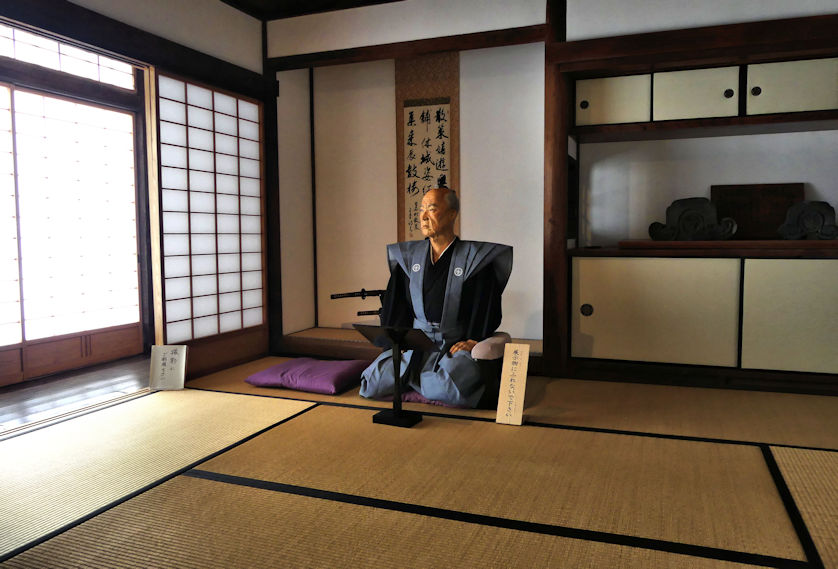 Inside the Karo Yashiki Samurai residence in Izushi

Close to the tourist office is a former samurai home. Situated so close to the castle, the Karo Yashiki was the residence of a high-ranking samurai household and so could be classified as a mansion.

In the spacious interior are numerous displays of materials connected to the izushi clan including palanquins and ceremonial artifacts.

There are also old plans of the castle town and a little art. From the outside the building looks to be just a single storey, but actually a hidden staircase leads up to some low rooms on a second storey.

This was a defensive measure even though the Edo Period is known as an era of peace, there were sometimes power struggles within clans that spilled over into violence.

Immediately next door to Karo Yashiki is an art museum whose permanent collection focuses heavily on the works of locally-born Ito Kiyonaga, an artist who worked in western-style art and is mostly known for paintings of nudes.

However, two or three times a year they also hold special exhibitions and so it might be worth checking what is on when you visit. 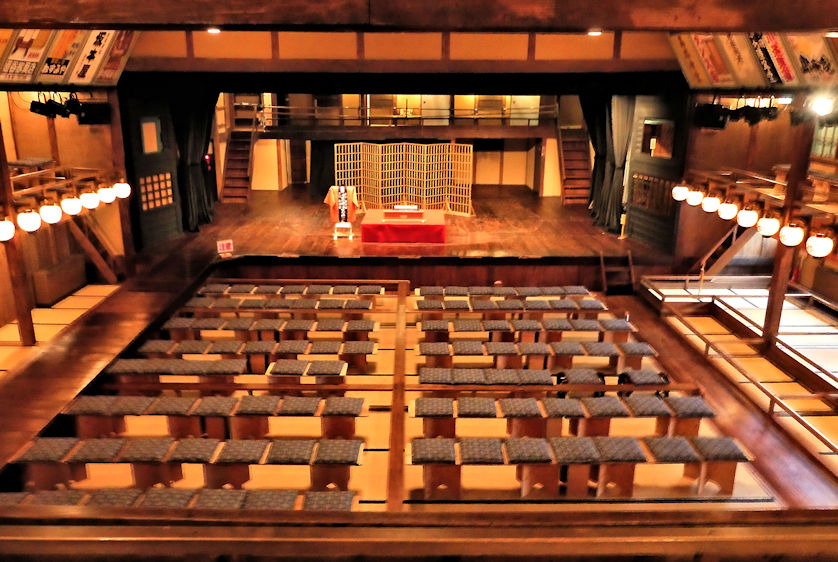 Eirakukan in Izushi, the oldest kabuki theater in the region

A few minutes walk away is one of the best known attractions of the town, the Eirakukan Kabuki Theater.

Built in 1901, it is claimed to be the oldest kabuki theater in the Kansai region and still puts on kabuki, kyogen, and other types of performances.

The whole theater is open to visitors including the auditorium, balconies, the stage, and backstage areas, however the most intriguing might well be the under stage area. Here you can see the mechanism that rotated the stage using just human power.

The center of town is the commercial district and here you will find many shops selling souvenirs, including Izushi-yaki, the fine, white porcelain that is produced locally.

There are, of course, also shops and businesses catering to the local community, but by now you are probably looking for somewhere to eat. Which brings me to the one word you will most often hear if you mention the name izushi to a Japanese person - soba! 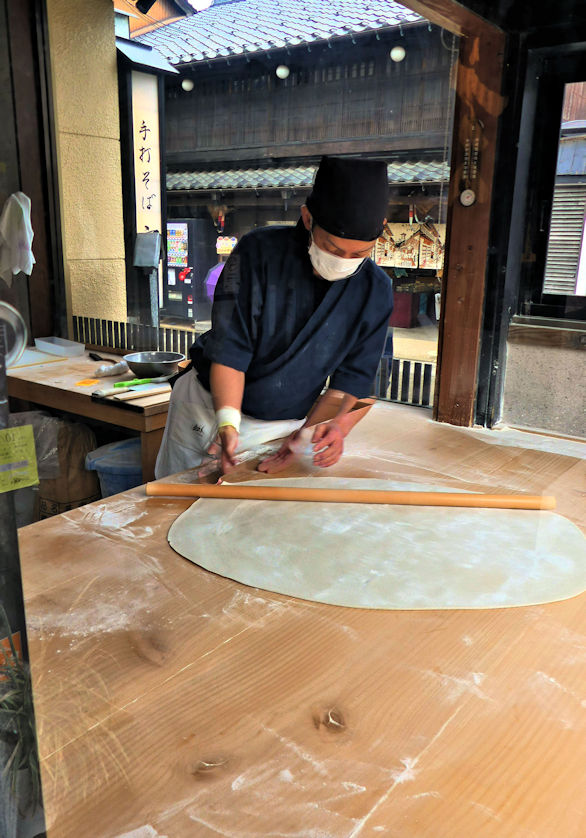 While izushi is not the only place in Japan that has a reputation for buckwheat noodles, I am guessing that you will be hard pressed to find anywhere with a greater concentration of soba restaurants.

With a population of just 10,000, Izushi is home to more than 70 soba restaurants, so you will have no trouble finding somewhere, and you will have probably seen the noodles being hand-made in several shop windows around the town. 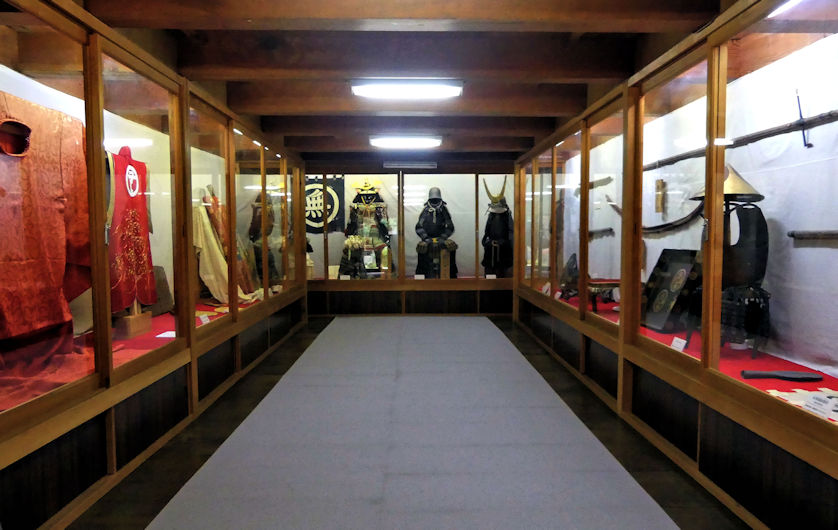 Display of samurai armor and weapons at Shiryokan, the izushi History Museum

To the north and east of the downtown area are several more sites worth visiting, and not to be missed is the Izushi History Museum.

Housed in a series of connected buildings that were rebuilt after a major fire in the town in 1876, the storehouses have displays of samurai armor and other artifacts from the rulers of the area.

However, the most appealing of what is on display are the rooms of the buildings themselves.

Built around a small central garden, most features of traditional Japanese architecture can be found while exploring this virtual warren.

Artworks of various kinds are on display in many rooms, and noticeable is the warm red of many of the walls, made using a local clay.

Across the street from the museum is a series of earthen-walled buildings that are part of a sake brewery. Just around the corner is the shop entrance of Sasazuru where you can try samples of the sake brewed here and even take a tour. 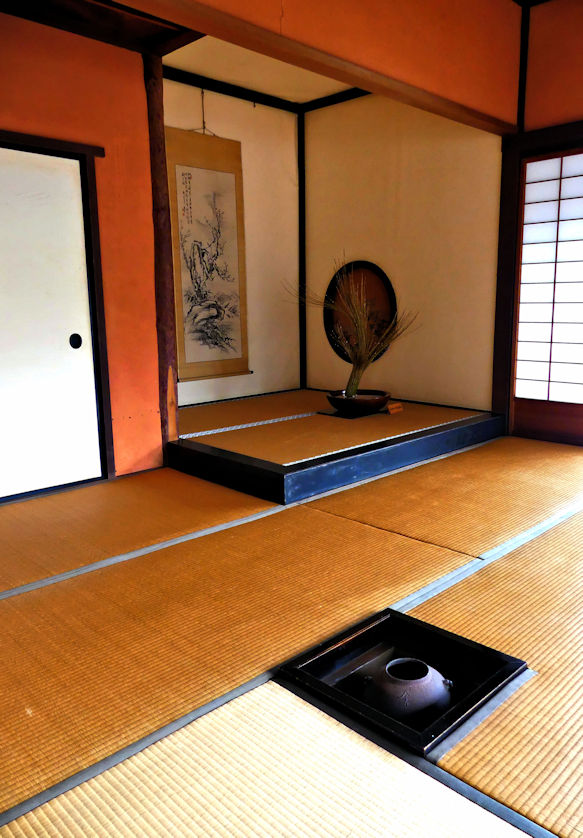 The road from here heads directly east towards the hills and at the end of the road you will come to Sukyoji Temple.

Originally established in the 14th century, this Rinzai :en temple is also known as Takuan Dera as legend has it that the popular daikon pickle called takuan was invented by a priest here.

The temple is home to several gardens and extensive grounds that can be walked around that are delightful in any season.

At Sukyoji you can try zazen, the seated Zen meditation technique.

If you speak Japanese you can contact the temple directly, but for those with limited or no Japanese, the folks at visitkinosaki.com can arrange a temple visit including the :en meditation.

They also have a wide range of activities and guided tours available including renting and wearing a kimono during your visit to Izushi.

There are a couple of hotels and ryokan in Izushi. There are far more accommodation choices in nearby Toyooka and in Kinosaki Onsen. 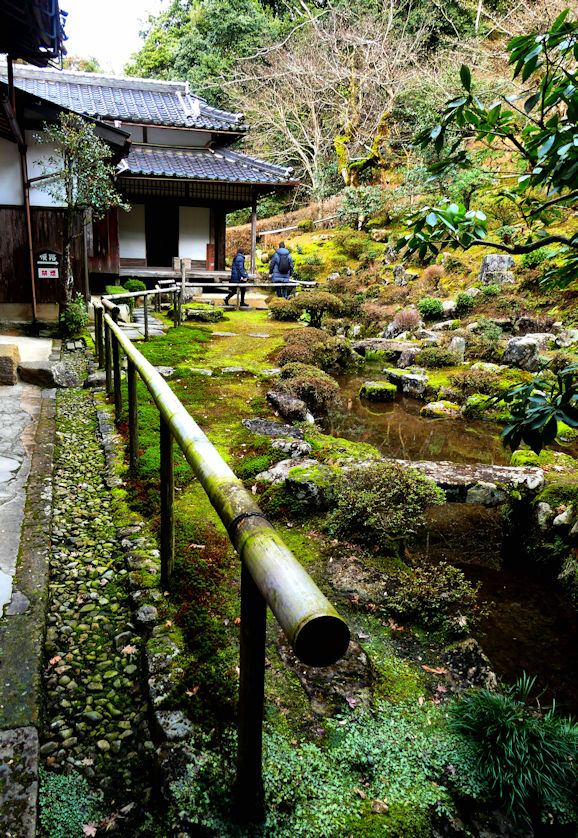 One of the Zen gardens at Sukyoji Temple in Izushi

The most convenient public transport to Izushi is by bus from Toyooka Station and takes about 30 minutes. There are a few buses directly from Kinosaki Onsen with a journey time of about an hour.

Toyooka is on the main JR San-in Line and is about 2.5 hours from Kyoto by express train. 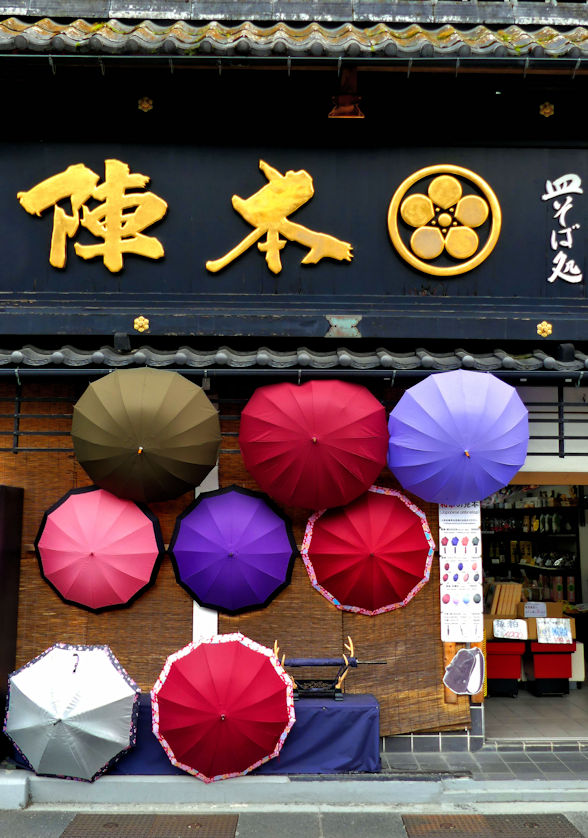 Toyooka City Guide: Toyooka is located in northern Hyogo Prefecture and includes sites that are part of the UNESCO San'in Kaigan Global Geopark west from Tottori.

Kinosaki Onsen attractions: fun things to see and do in Kinosaki Onsen in Hyogo Prefecture in addition to hot spring bathing - temples, museums, walks and the cable car.

Izushi Castle is a ruined yamashiro or hill top castle in the town of Izushi in Hyogo Prefecture. Izushi Castle was built in 1604 by Koide Yoshihide.