Toyooka City Guide: Toyooka is located in northern Hyogo Prefecture and includes sites that are part of the UNESCO San'in Kaigan Global Geopark west from Tottori. 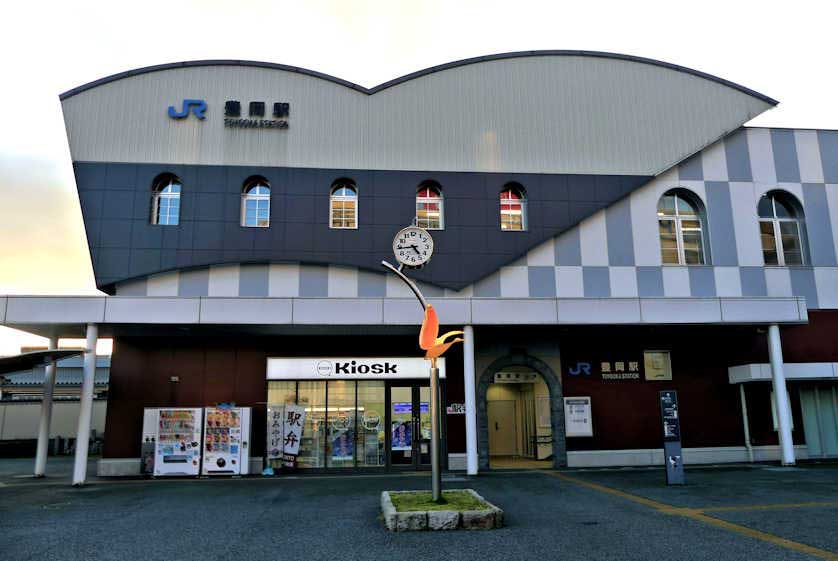 Toyooka Railway Station for both JR and the Kyoto Tango Railway

Toyooka city, with a population of just 80,000, is a small city located in northern Hyogo Prefecture, part of the Kansai region.

It covers an area of about 700,000 square kilometers that is primarily rural that includes river valleys with agricultural flatlands, wetlands, forested mountains, and a coastline featuring impressive cliffs as well as delightful beaches.

Toyooka is the administrative and commercial center for the region and the city boundaries have expanded to include several towns and numerous villages.

Toyooka also includes within its boundaries a series of sites that are part of the UNESCO San'in Kaigan Global Geopark that extends along the Japan Sea coast from Tottori in the west to the Tango Peninsula in the east.

Toyooka is known as the "City of Bags". There are more than 60 companies producing bags in the city, and it is estimated that about 70% of all bags produced in Japan, not including leather ones, are made in Toyooka.

The origins of Toyooka bags lie in the Edo Period when the area became known for the production of a type of wicker storage box.

In the late 19th century a handle was added to some of these boxes and so they became bags. The rest is, as they say, history.

Bags from Toyooka are now sold to companies all over the world, but it is possible to see and buy some here in the town, on Kaban Street, literally "Bag Street.

Here are a collection of shops selling a wide variety of bags produced in the town. Planters shaped as bags line the sidewalks, and there is even a vending machine where visitors can buy a souvenir bag.

The main street that runs away from the station is called Daikai Street with many shops and cafes etc. The area is home to a multitude of izakayas and bars with a wide range of cuisines, and from the Tourist Information Office you can pick up a map in English that shows details of all establishments that offer menus in English.

A breeding pair of Oriental White Storks, an environmental success story in Toyooka

Kounotori, are now the major symbol of Toyooka.

Oriental White Stork in English, depictions of them can be found everywhere and sightings of them are commented upon by locals in daily conversations.

Not having such a major place in Japanese culture as say the crane, they were commonplace throughout history until becoming extinct in 1971.

Prior to that there was an attempt in Toyooka to breed them in captivity, but that failed until Russia donated a breeding pair.

With this initial success a wide range of measures were instigated to restore their habitat, the loss of which was the main cause of their extinction.

Wetlands had to be restored, a process that continues today. Artificial trees where the storks could build their nests had to be created, and perhaps the the biggest change, a shift in how rice was produced, as the rice paddies provided the storks with a major food source.

Not only were production methods for rice made more organic, but the timing of when the paddies are flooded was changed.

This made the locally produced rice more expensive to produce but resulted in a campaign to promote "Stork-friendly" rice to consumers that has been successful and continues to grow. This community-wide program to bring back the storks has been so successful it is now being used at other locations around the country.

Storks can be seen all around the town now, but the best place is the Hyogo Park of the Oriental White Stork where you can see wild storks as well as the areas where they are being bred in captivity before being released.

The museum has many displays explaining the storks and the local program, but most highly recommended is the video, with English subtitles, that goes into the details of this eco success story.

One of the major sites included in the San'in Kaigan Global Geopark is Genbudo Cave. Actually not a true cave, it is a set of geological formations created by volcanic activity which produced geometric basalt columns. It is also the site where a Japanese scientist made an important discovery. The associated museum has lots of displays that will appeal to all ages including precious stones and dinosaur fossils.

A 20 minute bus journey from Kinosaki Onsen, or a free ferry across the river from JR Genbudo Station on the opposite river bank.

The famous hot spring resort of Kinosaki is now a part of Toyooka. Known for its seven public baths and among foreign visitors for being tattoo-friendly, Kinosaki Onsen is by far the most well known tourist destination in the area. There is much more than just hot springs in the town, and it is less than 10 minutes away by train.

Izushi is a former castle town to the southeast of central Toyooka. Featuring streetscapes of traditional buildings, picturesque temple gardens, and several historical open houses and museums, it is home to the oldest Kabuki Theater in the region and dozens and dozens of eateries serving the local specialty, soba noodles. It is less than 40 minutes by bus from central Toyooka.

Genbudo Cave, a remarkable geological site that is part of the Sanin Kaigan Global Geopark

Being situated roughly in the middle of the Geopark, Toyooka is well placed as a base to explore not just the sites within its own boundaries. But in the neighboring sections of the park.

The Kannabe Highlands in the mountains east of central Toyooka has many sites included in the Geopark and so offers a wide variety of features that can be enjoyed by hiking or by car.

However it is most popular in the winter as a ski resort that offers easy access to residents and visitors from the Kyoto and Osaka areas. With a range of slopes and lifts to suit many levels of skier and snow boarder the area is well supplied with lodges and hotels.

Toyooka is the transport hub for the region with either buses or trains connecting to all the sites of interest within the city as well as in neighboring area.

Toyooka is the terminal station for the Miyatoyo Line of the Kyoto Tango Railway, commonly known as Tantetsu.

The Miyatoyo Line of the Kyoto Tango Railway terminates in Toyooka

This scenic line crosses over the Tango Peninsula to Miyazu near where the major tourist destination of Amanohashidate is located.

The increasingly popular seaside village of Ine is also nearby, and Maizuru is just a short train ride from Miyazu. As well as the regular trains, special sightseeing trains featuring unique interiors and gourmet dining experiences also operate on the line.

The JR Limited Express Hashidate travels between Kyoto and Toyooka via Amanohashidate and uses the Kyoto Tango Railway track for the final part of the journey.

Tajima Airport, just 8 km by bus or taxi from central Toyooka has daily flights to and from Osaka from where connecting flights are available to the rest of Japan.

There are many types of accommodations scattered throughout the Toyooka area, and a cluster of hotels near the main railway station are convenient as a base for exploring the wider area.

Located within the main station building, the Toyooka Information Center has all the information you need regarding sightseeing, accommodations, and events in the area.

Kinosaki Onsen attractions: fun things to see and do in Kinosaki Onsen in Hyogo Prefecture in addition to hot spring bathing - temples, museums, walks and the cable car.

Izushi Castle is a ruined yamashiro or hill top castle in the town of Izushi in Hyogo Prefecture. Izushi Castle was built in 1604 by Koide Yoshihide.