Fushimi Inari, The Mountain of a Thousand Torii

South of Kyoto, the torii of Fushimi Inari Taisha, traditional gates at the entrance to Shinto shrines, lined up in their thousands on the mountainside. This is a must-visit place in Kyoto and Japan, for any visitor.

Fushimi Inari Shinto shrine and its spellbinding red torii paths attract hundreds of thousands of visitors each year. The image of the vermilion "tunnels" created by the aligned torii is a classic Japanese image. Tourists to Kyoto should not miss visiting this very special shrine.

The History of Fushimi Inari Taisha

Fushimi Inari Taisha, a Shinto shrine, was built in 711 by the Hata clan (of Korean origin) and relocated to its current location in 817. It is dedicated to the goddess (kami) Inari, related to rice, and therefore more widely to prosperity and wealth. Inari is the patron saint of traders: this is why the majority of torii are paid by businessmen, traders and companies. Their names are engraved in Japanese on the uprights of the red torii.

Fushimi Inari Taisha is well known because it is quite rare that the torii are together and aligned in one place. A torii is a gate, marks the entrance to a Shinto shrine, and symbolically separates the physical world from the spiritual world of the kami.

The shrine, which is very important in Japan, was placed under imperial patronage during the Heian period. At the beginning of the 20th century, it was designated as a national treasure, today a significant cultural property. It is the largest shrine dedicated to Inari in the whole country.

The shrine extends over a large area on the side of a small mountain Inari (220 meters). From the foot of the mountain, it is possible to reach the summit by various paths. This short hike lasts about 2 hours to 2 hours 30 minutes, following some steep slopes and many stairs. This walk is a unique experience in the middle of a sometimes almost exotic forest. Along the way, you will come across numerous shrines scattered here and there, as well as large bamboo forests. From the top, the view of the city is exceptional and especially recommended at sunset.

Take the time to stroll, shop around the entrance, hesitating between two lanes when the path splits two rows of torii are available to you, you can turn around when you like if you do not wish to walk to the summit.  Stone statuettes of Kitsune - mythical foxes- decorate the shrine here and there, throughout your walk. They lend a heightened sense of spirituality to this place. The Inari, the deity of rice growth, business, and trade, reigns in this place via his earthly messenger, the cunning animal who stares at you with his prying eyes, holds the key to the rice granary in his mouth. 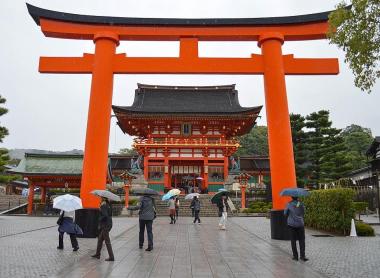 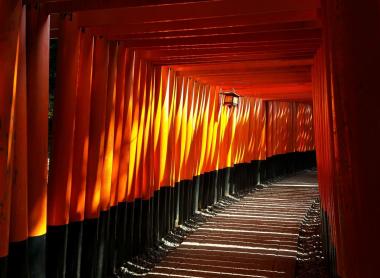 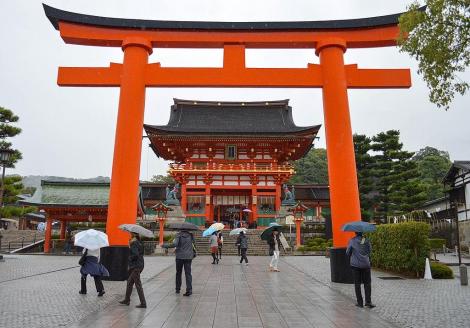 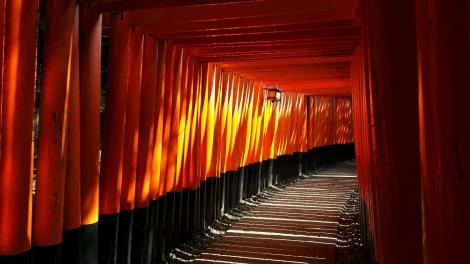 This shrine is very popular with tourists. It is not uncommon for the pathway under the torii to be very crowded. It can be difficult to take beautiful photos or simply to enjoy the serenity of the place. Therefore, it is advisable to go to Fushimi Inari early in the morning or even in the evening (the shrine does not close).

Another tip: the double torii path at the foot of the mountain is the most frequented. So to avoid the crowds, keep climbing, and take a smaller torii path. You will meet fewer and fewer people and will be able to enjoy the impressiveness and the magic of the place.

Motomiya, the Festival in the Lights of the Fushimi Inari

The Motomiya festival is an event not to be missed if you are in Kyoto around July 20. It is the biggest festival of Fushimi Inari Taisha. The Motomiya matsuri is held over two days. The first evening hundreds of red lanterns are placed throughout the shrine, known in Japanese as "Yomiya", even on the torii paths, which brings a unique atmosphere. There is also a  beautiful exhibition of painted lanterns.

Visiting Fushimi Inari Taisha that evening is a unique experience and an opportunity to enjoy a Japanese-style festival atmosphere. There are street food stalls and singing and dancing. Put on your fox mask, and participate in the festivities.