Hachioji is a city of about 580,000 inhabitants, located in the southwest of the Tama region west of central Tokyo; sights include Gokuraku-ji Temple and the Hachioji Castle ruins. 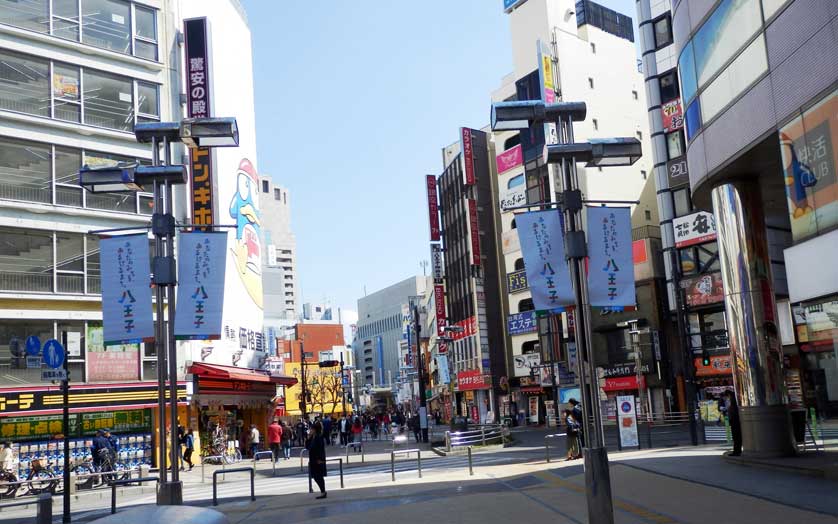 Nishi Hoshasen You Road with Hachioji Station in the background, Hachioji

Hachioji is a city of about 580,000 inhabitants, located in the southwest of the Tama region west of central Tokyo.

The convenient train connections in combination with relatively low real estate prices have turned Hachioji into a commuter town.

For the same reason, many universities have opened large Hachioji campuses, giving the city somewhat the feel of a university town.

Hachioji extends however far beyond its core town. Large sections of the Okutama mountain foothills belong to Hachioji, including the popular hiking destinations Mount Takao and Mount Jinba.

The Musashi Imperial Graveyard, the final resting place of the Taisho and Showa Emperors, is also located in Hachioji.

Central Hachioji is, no surprise, centered around Hachioji Station. Leave Hachioji Station via the north exit and you find a small city tourist office on the street level. City walking maps in English and other languages are available for free.

Before heading out for a walk, it might be interesting to spend a few thoughts on the history of the city.

Many of the temples, shrines and castle ruins located within today's Hachioji precede the actual city.

The history of Hachioji as a city started when Osada Sakuzaemon, a local feudal lord, opened in the beginning of the Edo Period (1603 - 1868) the Yoka-machi post station on the busy Koshu Kaido Road, connecting Edo, today's Tokyo with Kofu and places further west.

Those post stations were not just places to change horses and taking a rest for the night. They were busy market places, featuring a cluster of restaurants and brothels along with the rest houses for the travelers.

After the opening of Japan to international trade at the beginning of the Meiji Period (1869 - 1912), Hachioji became a center for silk production. The international demand for Japanese silk was high and gave a huge economic boost to many places in the Kanto region.

Hachioji grew quickly. In 1889, Hachioji was connected to the Japanese railway network, providing easy access to and from central Tokyo.

During the final days of World War II, American bombing raids destroyed much of the city.

In the post-war days, Hachioji was soon re-built as a modern industrial city. The silk trade, Hachioji's main industry, however died in the 1960s with the advance of the mass production of cheaper fabrics.

Since then, Hachioji has largely become a Tokyo commuter town. Numerous universities and colleges decided to take advantage of the good train connections the city offers as well as the relatively cheap property prices and opened large-scale campuses in Hachioji.

Today, Hachioji is a lively modern city - at least within close walking distance from the north exit of Hachioji Station. Venture further and you will soon find yourself in very quiet residential streets, dotted with temples and shrines.

Starting at the north exit of Hachioji Station and cutting diagonally through the straight north-south / east -west streets of the area, Nishi Hoshasen You Road is Hachioji's main pedestrian mile. It is lined with boutiques and restaurants, there are plenty of benches to rest after the shopping trips. 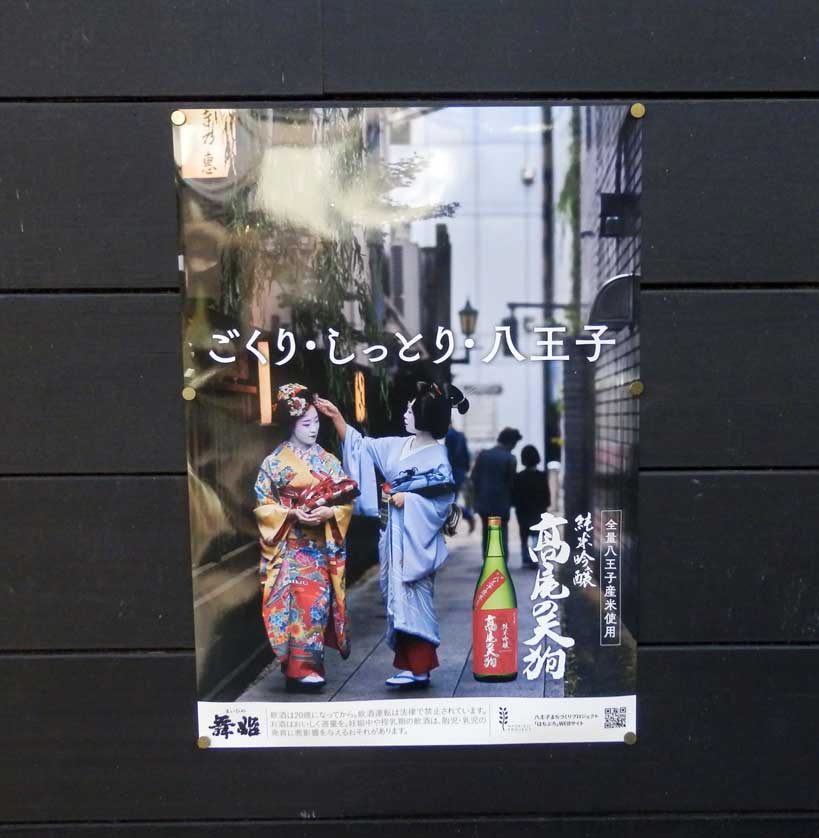 Nishi Hoshasen You Road meets Koshu-kaido in Yoka-machi. Somewhere around that intersection must have been the original Edo Period post station.

While the post station itself has long disappeared, the ancient entertainment district has partly survived.

Hachioji Naka-cho Park is just a little enlargement of Nishi Hoshasen You Road, shortly before the intersection of the pedestrian strip with the old Koshu Kaido Road, featuring a few trees, a few benches and a monument to Nobutsugu Koenuma (1908 - 1946), a doctor born in Hachioji who went to further his medical studies in Germany shortly before the start of World War II. He survived the war but was afterwards pressed by Soviet forces to treat patients of infectious diseases in very unsanitary conditions. After a few months of such work, Koenuma died himself of typhoid fever. Today, he is considered a hero in Hachioji.

On the left (west) side of Hachioji Naka-cho Park, you can see a tiny alley with black walls starting out, it's entrance marked with a vintage gas light.

That alley is Naka-cho Kurobei, the main remnant of the old entertainment district.

During the Edo Period and even more so during the Meiji Period, when Hachioji was a rich silk trade town, a great number of geiko, traditional Japanese female entertainers, were working in the area. Today, there are still about 20 geiko entertaining guests at their establishments, materials released by the Hachioji Tourism Office claim.

At a brief stroll through Kurobei (Black Wall) alley, none could be seen but there were plenty of posters on the traditional black walls with pictures of them. Those posters were not promoting any particular businesses, they promoted the area as such.

Kurobei alley is, in fact, not much more than 100 meters long. The alley is however part of a bar district with many traditional izakaya bars as well as places that look more like members-only establishments. You may need to be introduced by a long-term customer to be able to enjoy the entertainment provided there. 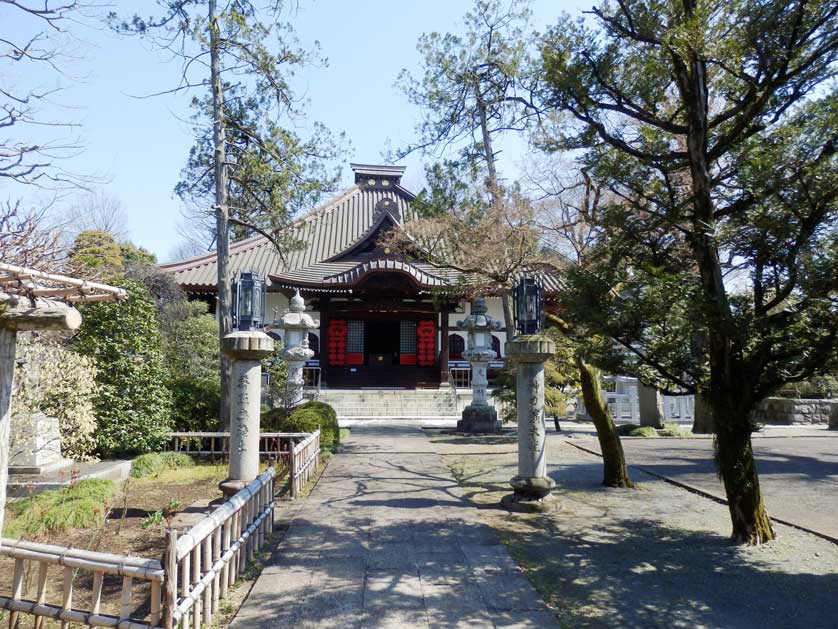 Walk north from the intersection of Nishi Hoshasen You Road with the Koshu Kaido and after about 10 minutes, you will arrive at the Asakawa Bridge, crossing the Asakawa River.

Right before the bridge is Gokuraku-ji Temple, which translates as Paradise Temple. It is one of the largest Buddhist temples in Hachioji and certainly the one with the most interesting historical connections. The founder of the original Yoka-machi post station, Osada Sakuzaemon, is buried here. He is said to have died in the year 1617. 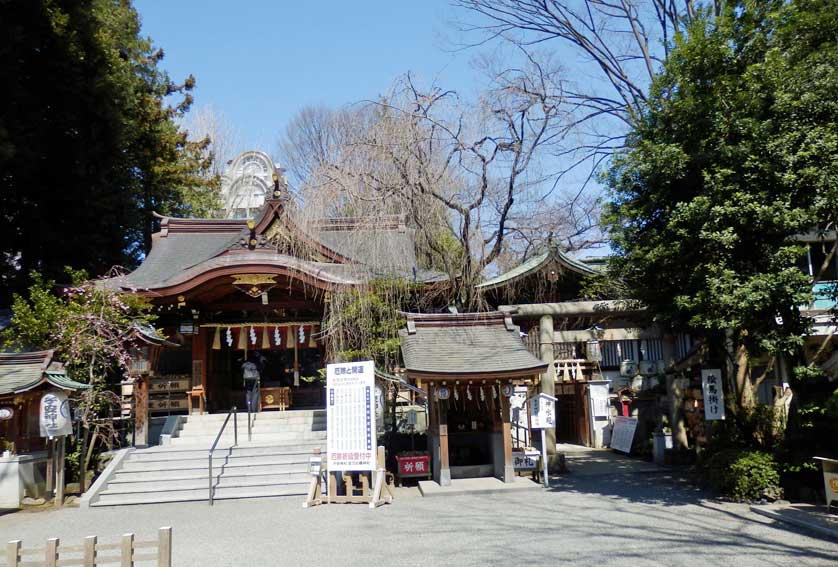 Other Temples and Shrines

There is a walkway along the Asakawa River. Unfortunately, it is not very scenic with more or less modern buildings stretching along the river on both sides.

It may be more interesting to enter the narrow streets of the neighborhood, map in hand, to search out the many Buddhist temples and Shinto shrines.

Most of them are practical neighborhood entities, the Buddhist temples featuring large local graveyards.

My personal favorites were the Hachiman Yakumo Shrine and especially the Kosuya Shrine, the latter being a very atmospheric shrine concentrating beautiful ancient Shinto architecture in an otherwise very modern neighborhood. 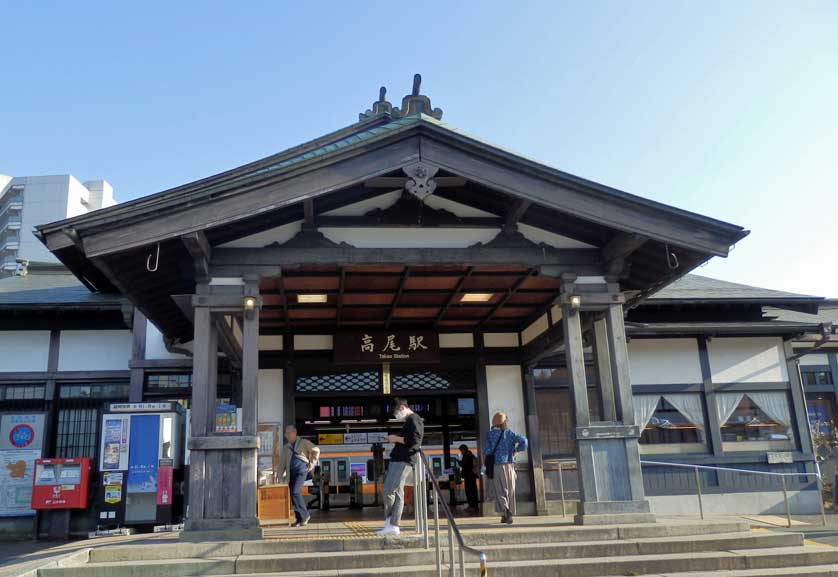 From Tokyo or Shinjuku take the JR Chuo Line towards Takao Station, get off at Hachioji Station.

From Yokohama, take a Yokohama Line train from Shin Yokohama Station to Hachioji Station. Travel time is about 45 minutes.

The JR Chuo Line terminates at Takao Station, two stops after Hachioji Station. The station building itself is rather picturesque and it is located in a semi-rural mountain environment.

It also offers access to the Hachioji Castle ruins. 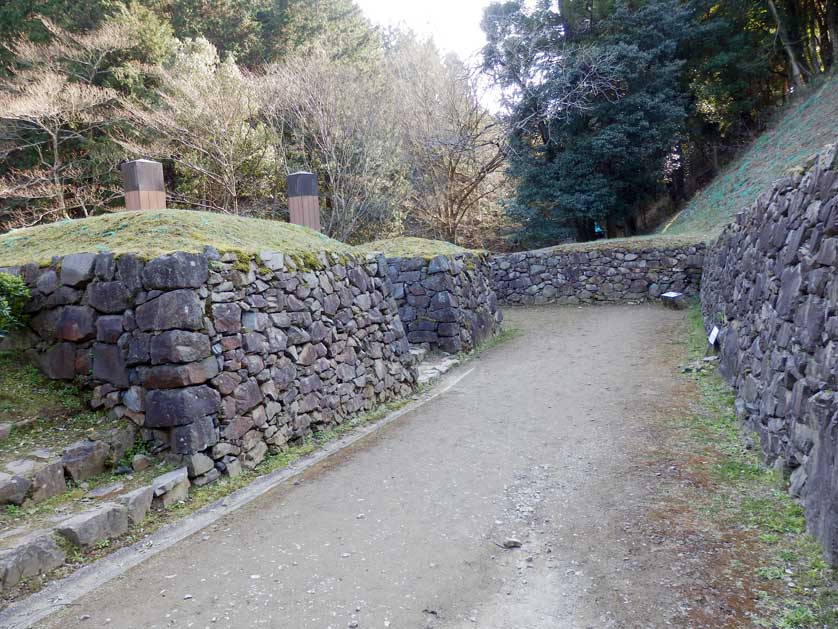 Hachioji Castle was built by Hoji Ujiteru (ca 1540 - 1590), a feudal lord belonging to the Hojo clan, based in today's Odawara, Kanagawa Prefecture. The Hojo clan held sway over much of the Kanto region and became major competitors of Toyotomi Hideyoshi (1536 - 1598) in his quest of unifying Japan towards the end of the Warring States Period (Sengoku Jidai) in the late 16th century.

Hachioji Castle was a spread-out mountain castle, one of the greatest in the Kanto region, taking great advantage of the natural landscape. The castle was located on top of a mountain, Mount Fukazawa aka Mount Shiroyama, the various ravines and slopes were skillfully fortified. Shirokawa River served as a natural moat.

When however Toyotomi Hideyoshi attacked with the strength of 50,000 warriors in June 1590, the castle guard of only 1300 men was defeated within one day.

Toyotomi Hideyoshi ordered the castle to be completely destroyed.

Today, after many years of reconstruction work, some of the castle walls have been restored and bridges in the original design rebuilt.

Still, the site of the main castle buildings consists today only of stone markers on the ground.

It's a quiet place to visit and to feel the atmosphere of ancient history the site still radiates.

Getting to Hachioji Castle Ruins

From JR Takao Station, it's a pleasant walk of about 40 minutes one way.

Walk out the north exit of Takao Station, walk straight ahead about one kilometer, turn left onto Highway 61, turn left when you see a sign pointing towards Hachioji Joseki. From there the road to the castle ruins is a nice stroll through a quiet neighborhood dominated by stonemasons specializing in Buddhist tombstones.

In front of the ruin site is a visitor center providing information about the castle and its remains.

Opening times of the visitor center: daily from 8.30 am to 5 pm, closed during the New Year Holidays (December 29th to January 3rd).

Admission to the castle ruins is free.