Otabi Festival Komatsu: read a guide to the Otabi Festival in Komatsu. The festival consists of children's kabuki performances on beautifully decorated floats with music. 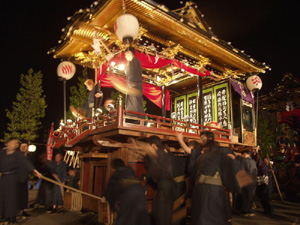 The annual Otabi (meaning "travel") festival, which is held each year in spring in the city of Komatsu, is less well known than Ishikawa Prefecture's other attractions, such as the garden of Kenroku-en in Kanazawa and the hot spring baths of Awazu and Yamashiro, but it is well worth a visit.

Komatsu itself is an old castle town on the western Sea of Japan coast founded by Toshitsune Maeda (the third Kaga lord), who protected and promoted both industry and arts and culture, so that the town flourished under his leadership and through the mid-Edo period. There are still many craftsmen in the area working with Kaga silk, Kutani pottery and so on, whose skills have been handed down since that time.

The Otabi festival dates back around 340 years and is said to have begun when portable shrines were carried through the streets to celebrate the building of the Ubashi and Motori-Hiyoshi shrines by Toshitsune Maeda.

The modern festival is held over several days in May and features children's kabuki performances on wheeled floats (hikiyama 曳山) throughout the city. On each day of the festival, the beautifully decorated hikiyama are set up in the city and performances are held through the day and into the evening.

The floats come from eight different towns of the city, and are all on display during the festival, although only two each year are used for performances. These hikiyama all have a long history and are perfect mini outdoor stages, raised above the spectators. Even in bad weather, their elegant wooden roofs hanging over the stage protect the children from rain, although the spectators may not be so lucky!

For the children, the build-up to the festival starts well in advance, almost as soon as the previous year's festival has finished. Although in "grown-up" kabuki, the actors are all male and come from traditional kabuki families, for this festival, boys and girls from any background are welcome.

Rehearsals are tough and in the beginning, many of the children don't understand the language of what they will be performing. It is rather as though small English children were being asked to interpret Shakespeare or Chaucer. The stylised movements and way of speaking in kabuki can also be tough to learn. But the results are quite spectacular.

Residents of Komatsu can start to savour the atmosphere in advance as rehearsals become more serious and continue well into the night. Wondering through the modern shopping gai in front of the station, on the way home from an evening out or a shopping trip, one can stumble across small children shuffling along in kimono, or hear ethereal music drifting out of a traditional wooden house, or catch other final preparations being made.

The kabuki performances themselves are mini masterpieces. The young performers seem to glide across the stage, with their faces absolutely set in concentration. The costumes, the stage and the words are just as they would be in a usual kabuki play, accompanied by the traditional flute, shamisen and drum. For a casual visitor, much of the pleasure comes from stumbling across an unexpected performance in the evening, of following the sound of the flute and finding locals leaning up against shuttered shop fronts, eating festival food and taking in the kabuki.

The highlight is the final evening when all eight stages line up in front of the city hall, with their lacquer decoration, gold leaf work and wooden carvings shown off to perfection as they are lit up for all to admire. At this climax of the festival, children perform on all illuminated eight stages in one spectacular evening.

The All Japan Children's Kabuki Festival also takes place at the same time as the Otabi festival and fabulous performances can be seen in the main city hall, but the true charm and atmosphere come from discovering a performance unexpectedly in the cool of the evening and knowing that this tradition will be thriving for a long time into the future.

JR West Komatsu Station - none of the performances are more than a 15 minute walk (most roads in town are shut). Komatsu Station is less than 20 minutes by train from Kanazawa.

Guided by Lady Baba, the owner of the place, discover the world of geishas by attending a show filled with humor and tradition.