Moomin Valley Park in Hann Saitama Prefecture is a theme park dedicated to the Moomin characters created by Tove Jansson (1914-2001) and popular in Japan. 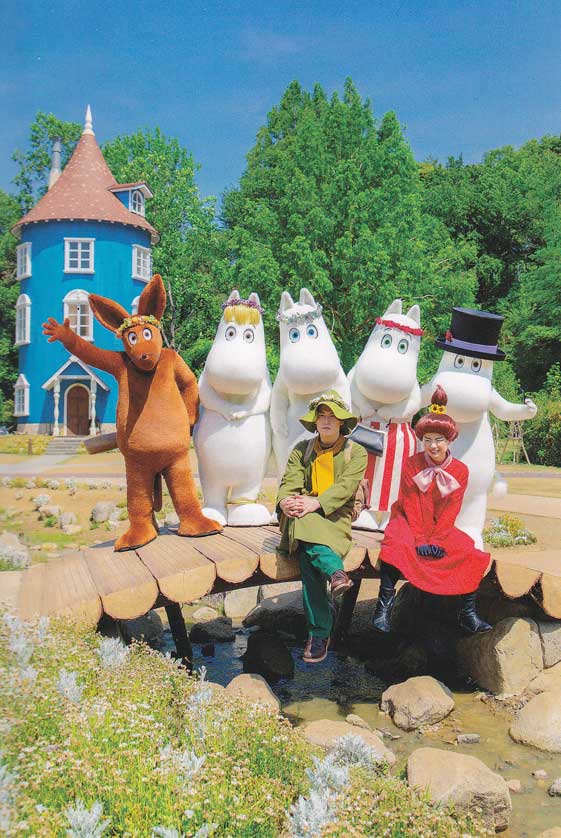 It is thus the newest addition to the various manga / anime inspired theme parks dotting the Tokyo Metropolitan Area.

The original Moomin characters were created in a series of books and newspaper comic strips by Swedish-speaking Finnish writer, painter and illustrator Tove Jansson (1914-2001).

The first book in the series, The Moomins and the Great Flood, published in Finland in 1945, introduced the central characters: Moomintroll, Moominpappa and Moominmama, all white and vaguely hippopotamus-like creatures, living in a fictional place named Moomin Valley.

More characters followed in the succeeding books, some living as neighbors and friends in Moomin Valley, others, like the philosophizing vagabond Snufkin, roaming around the world but making regulars calls at Moomin Valley.

They are all friends and in live in harmony though that harmony tends to get interrupted either by outside forces or by the frequent pranks some of the characters play on the others.

Though translated into many languages and turned into numerous international animation film series, the Moomins became particularly popular in Japan in the 1990's through a highly successful anime film series. 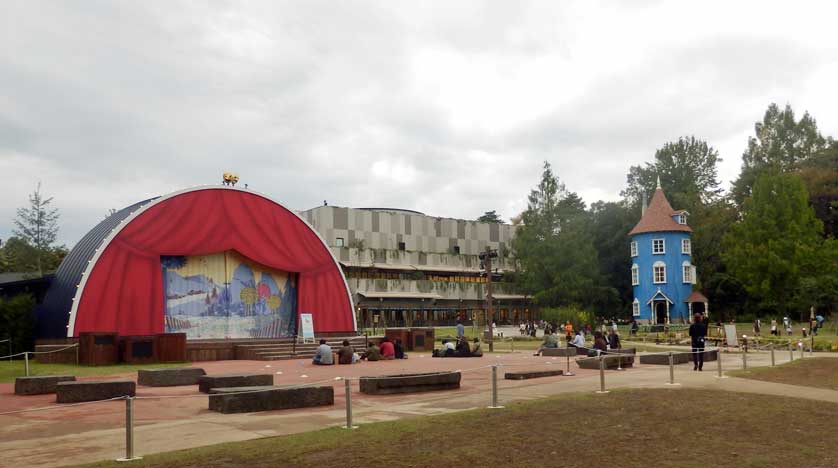 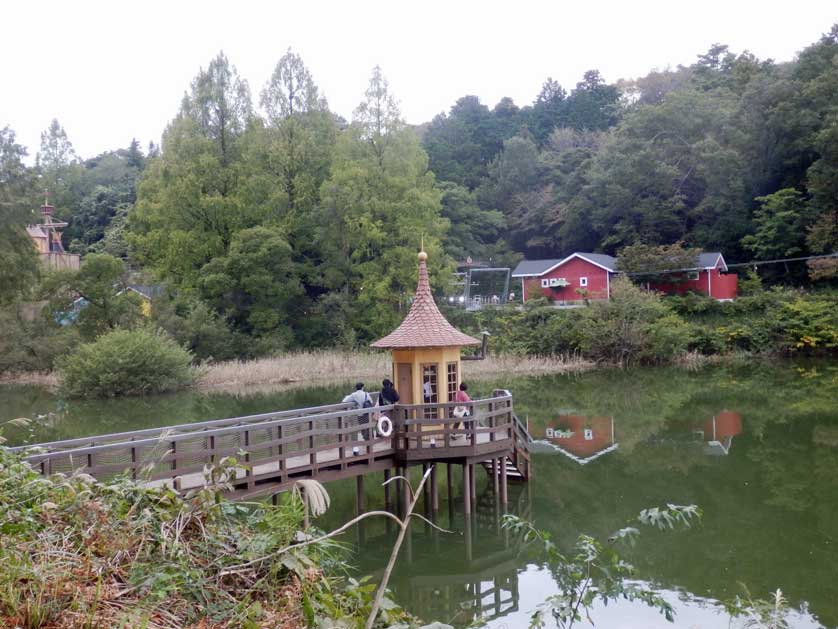 In the 1970's Tove Jansson gave her personal permission for a Moomin-themed children's park in the city of Hanno, Saitama Prefecture.

This park was opened in 1997 under the name Akebono Children's Forest Park (あけぼの子どもの森公園). It is situated below a wooded ridge, free of charge and features a small Moomin-inspired fantasy house as well as several playgrounds.

The house is open for children's activities. There is no souvenir shop. It is a very humble and absolutely non-commercial setting, not a tourist attraction at all. Though Japanese Moomin fans do seek it out, of course.

The new and very commercial Moomin Valley Park is a totally different affair. 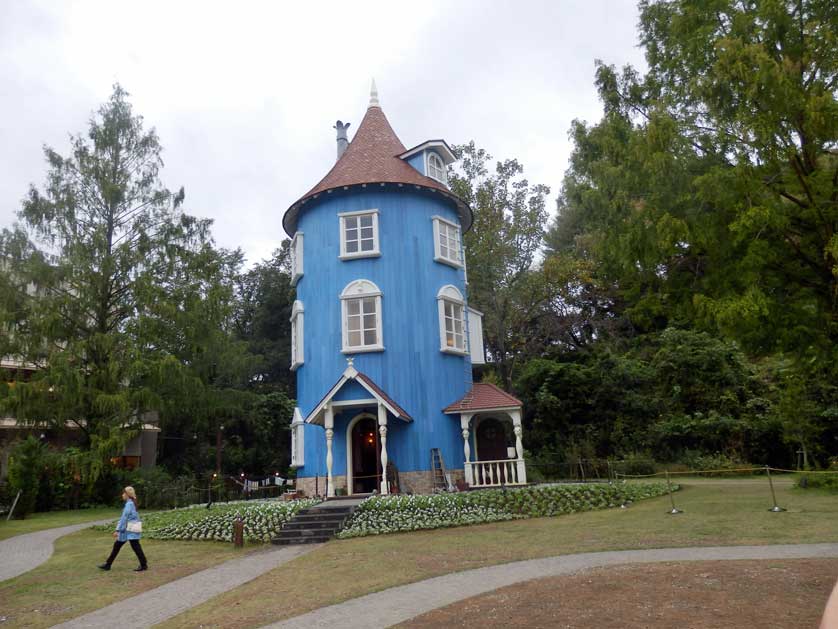 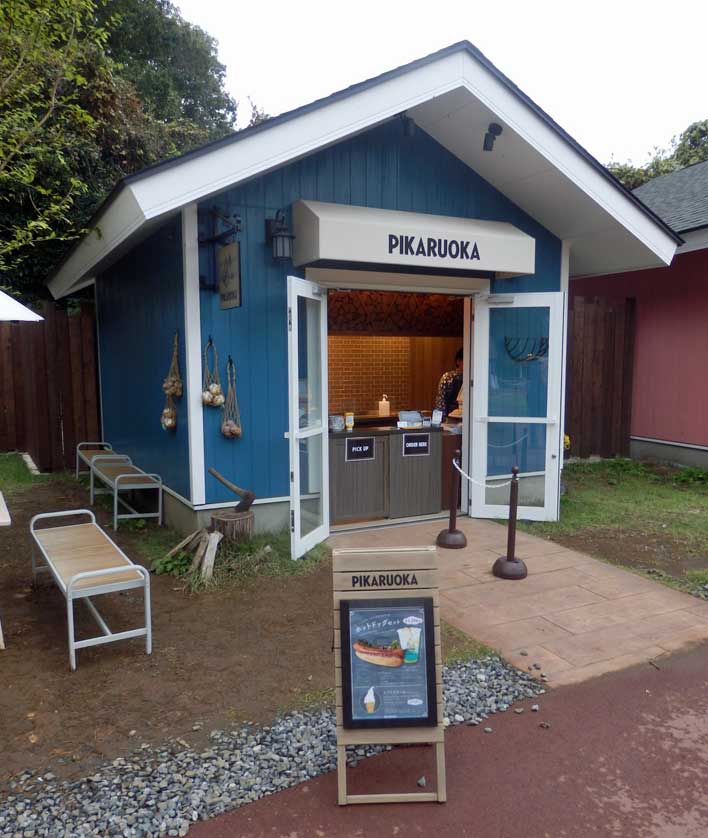 The new Moomin Valley Park in Hanno is part of Metsä Village, located on Lake Miyazawa.

Metsä Village is a Scandinavia-inspired day trip destination consisting largely of market halls and restaurants. It also offers various leisure activities such as canoe boat trips on Lake Miyazawa. The boats are built by hand in the local Sågverk (sawmill) which can also be visited and which also produces various hand-made souvenirs.

Though architecturally designed in Scandinavian style, don't expect to find a large variety of original Scandinavian foods at the Metsä markets and restaurants. The focus is more on local Saitama products with the occasional jars of Swedish lingonberry jam on the shelves.

If you really want to make it a Scandinavian day with Scandinavian food available in Japan (Swedish meat balls, pickled sour herring, crisp bread and the like), it is better to do some shopping in the food section of an IKEA market first. 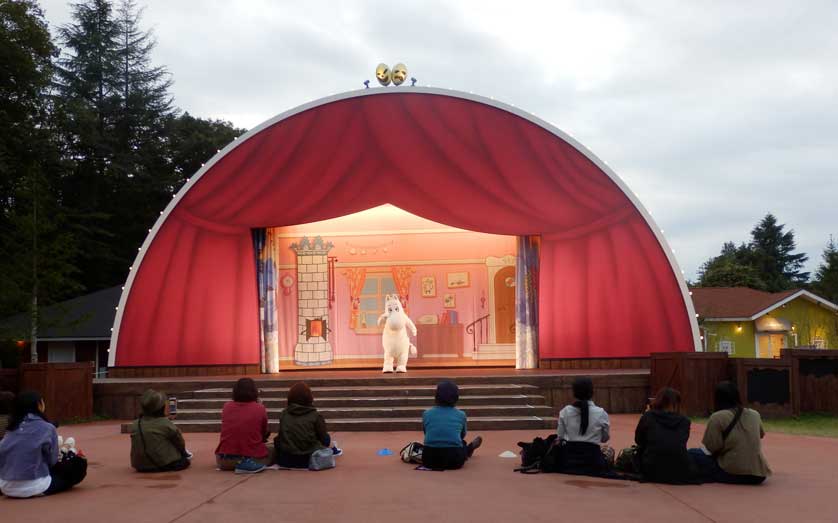 Emma teatteri with Moomintroll on stage 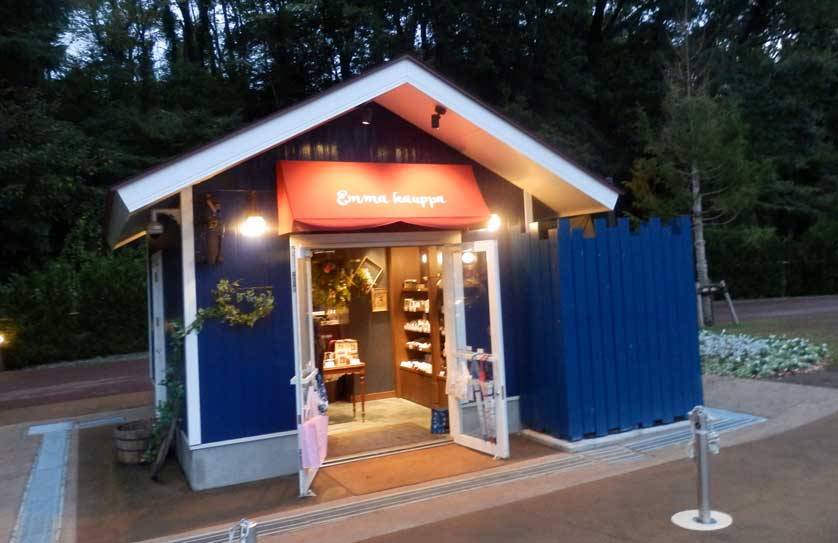 While a visit to Metsä Village is free of charge, you need to buy a ticket to get into the Moomin Valley section of Metsä, the actual Moomin theme park.

Located right on the lake shore and surrounded by wooded hills, the Moomin Valley Park designers did their best to create a Saitama version of Tove Jansson's fictional Moomin Valley, originally situated between the mountains and the sea.

Moomin Valley Park offers many buildings directly inspired by the illustrations in Tove Jansson's books, such as the iconic round blue Moomin House.

At an open air stage, a theatrical play involving the original Moomin family as well as some other central characters of the Moomin book series is offered for free to visitors throughout the day.

A visit to most other attractions such as the inside of the Moomin House, however, requires an additional fee. You need to buy the relevant tickets via vending machines. Typically it's about 1000 yen per adult, with lower rates for children.

Though the names of buildings and stores in Moomin Valley Park are generally labeled in Japanese and Finnish only, the ticket machines can be easily operated using English. 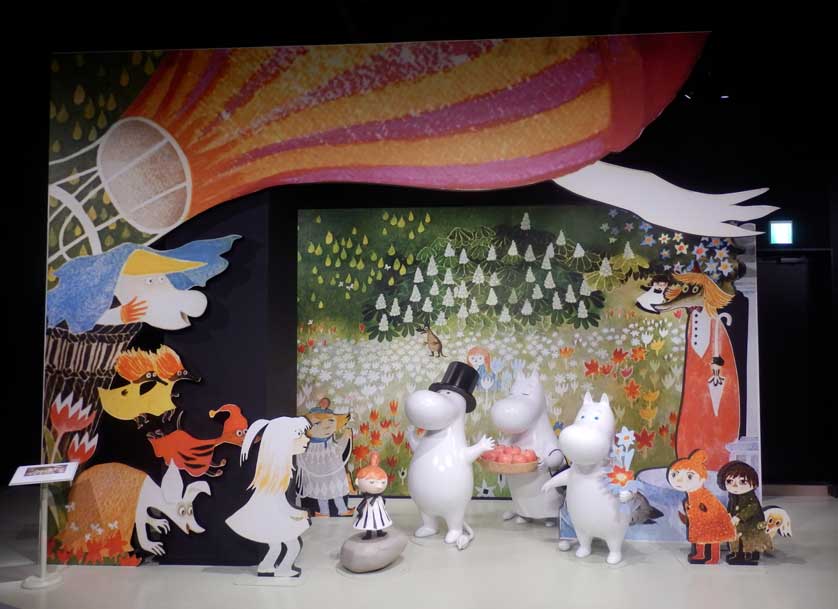 Moomin characters at the museum inside the Kokemus House

There are numerous attractions, which also include a very impressive Hobglobin's Zip Line ride over Lake Miyazawa right in front of Moomin Valley Park. Moomin Valley Park is also dotted with many tiny shops, displaying the Finnish word kauppa in their names.

Those kauppa are often but not always just focused on one Moomin character, selling a multitude of souvenirs centered on the character.

Other kauppa offer food, well sort of. The popcorn served in a cardboard version of the round Moomin House seems to be most popular (1000 yen) but there are also large hotdogs on sale at one kauppa (about 750 yen per piece).

Real Finnish sandwiches as sold, say, at Helsinki main train station, are nowhere in sight, though. The ones made of black bread with smoked salmon on top. Reindeer meat steaks. Don't search for any of here. You won't find them.

This is a Moomin theme park for Japanese visitors, after all, not a recreation of anything resembling real Finland. 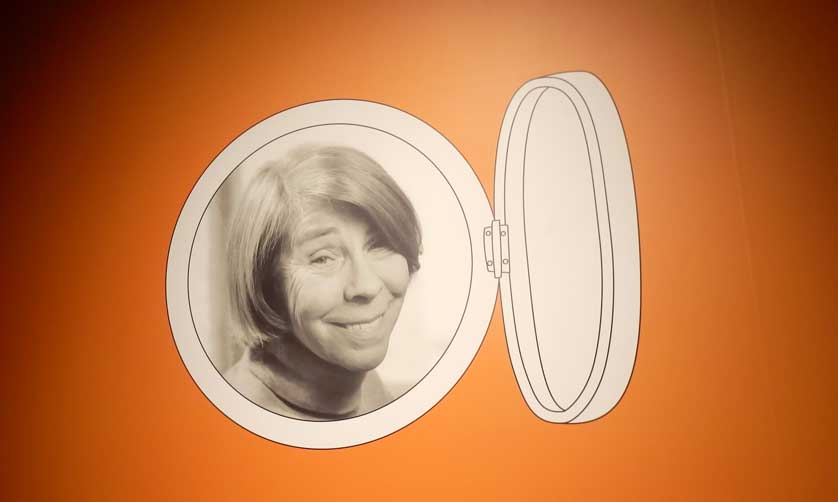 Tove Jansson photograph at the museum inside the Kokemus House

Moomin Valley Park does however offer a deeper insight into the actual work of Moomin creator Tove Jansson.

Enter the Kokemus House, a modern steel and glass building in the center of Moomin Valley Park, and take the elevator to the third floor.

Free of any additional charge, you are treated here to both modern interpretations of Jansson's work as well as plenty of her originals (mostly in reproduction but still quite impressive).

On the third floor you can see many Moomin characters in very interesting settings, many of them interactive. It's a stunning exhibition making full use of both the original characters and the most up-to-date in design and digital technology.

The second floor of the museum focusses on Tove Jansson's life and work through displays of her books, paintings, comic strips and her original Moomin artwork.

Video screens display early animated movie adaptations of the Moomins, the earliest having been made by West German television in the late 1950's under the name Die Mumin Familie (The Moomin Family) and broadcast as part of a very popular animated children's program titled Augsburger Puppenkiste (Augsburg Doll Box).

You see self-portraits of Tove Jansson as a cigarette smoking girl, you see her on video living in a sort of happy pastoral / seaside setting with her long-term lesbian lover Tuulikki Pietilä. The two of them did their best trying to live their own Moomin Valley-style life, partly but not completely lifting Jansson out of her self-doubts and depression.

Tove Jansson was an artist with all the inner conflicts that seem to go with that profession.

The ground floor of the Kokemus House features a western-style restaurant and a large gift shop.

After seeing the exhibition on her personal artwork and learning about Tove Jansson's outlook on life, you might just want to dismiss the gift shop as just another place exploiting her heritage.

But then, there are so many cute little things on offer - a little pricey perhaps but they would certainly make good gifts for family and friends at home. 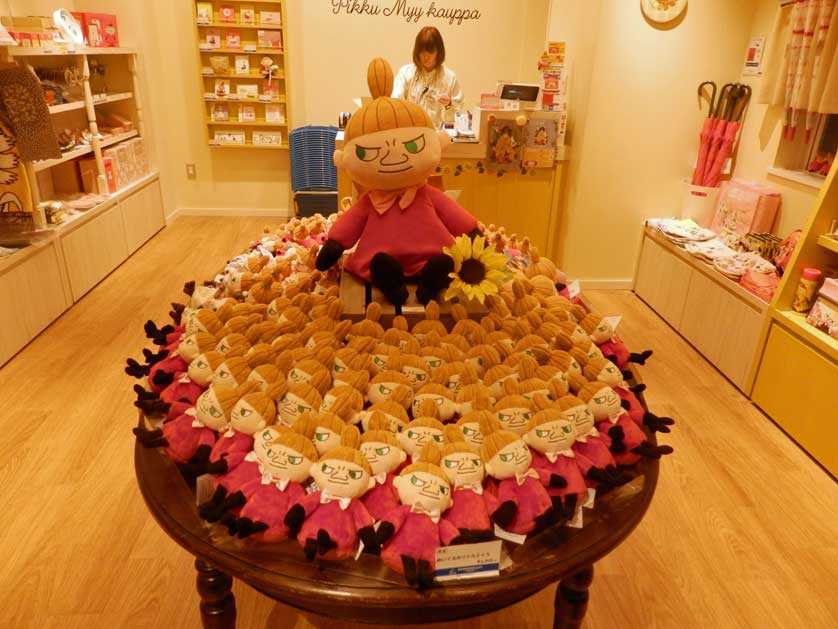 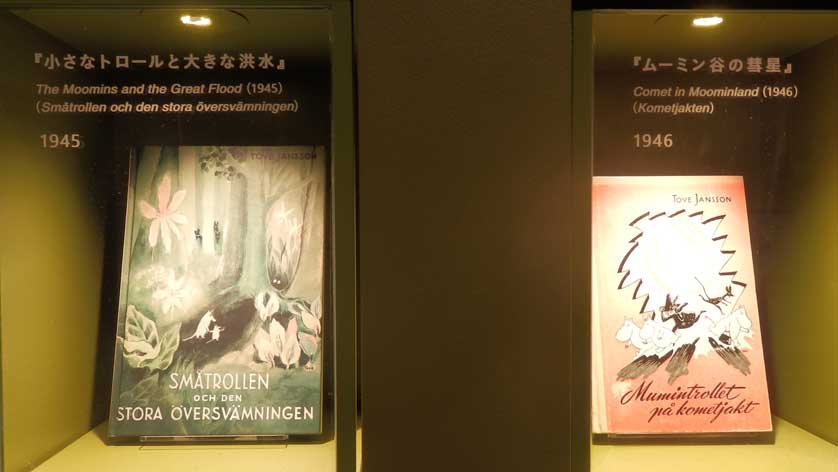 Metsä Village: daily from 10 am to 9 pm, admission is free.

From bus stop 1 outside Hanno Station's North Exit take the non-stop bus for Metsä (Kokusai Kogyo bus / Seibu bus / Eagle bus) or the regular bus for Musashi-Takahagi Station via Metsä (Eagle bus) and get off at the stop called Metsä.

Travel time is about 13 minutes.

The bus fare is payable to the driver when getting off. Please have cash ready as not all buses are equipped to receive payments by Pasmo, Suica and other travel cards.

The park is still in operation. Admission is free.

Most of the places to stay in Hanno are near Hanno Station including the 3-star Hotel Heritage Hanno and the Marroad Inn Hanno, also a 3-star business hotel. Hotel Oxy is a love hotel to the north east of town in the suburbs. 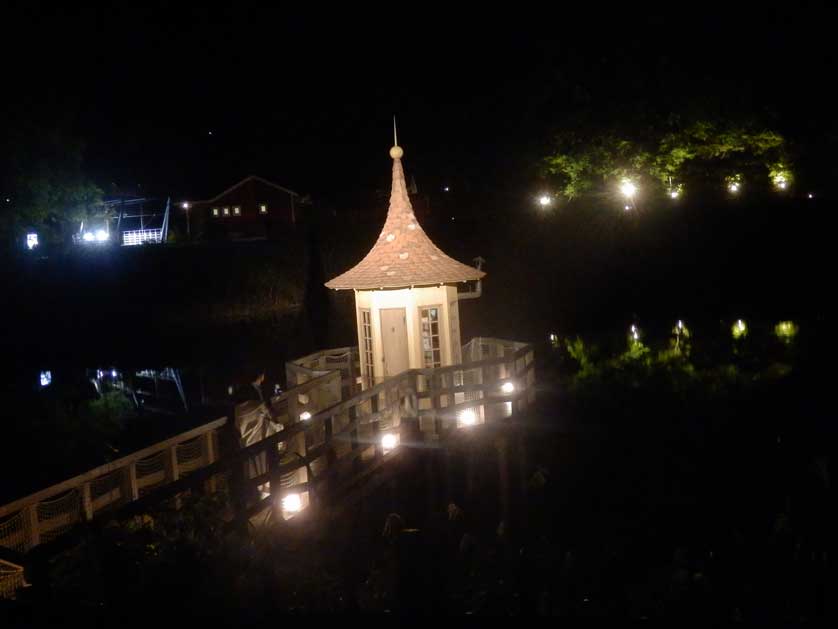 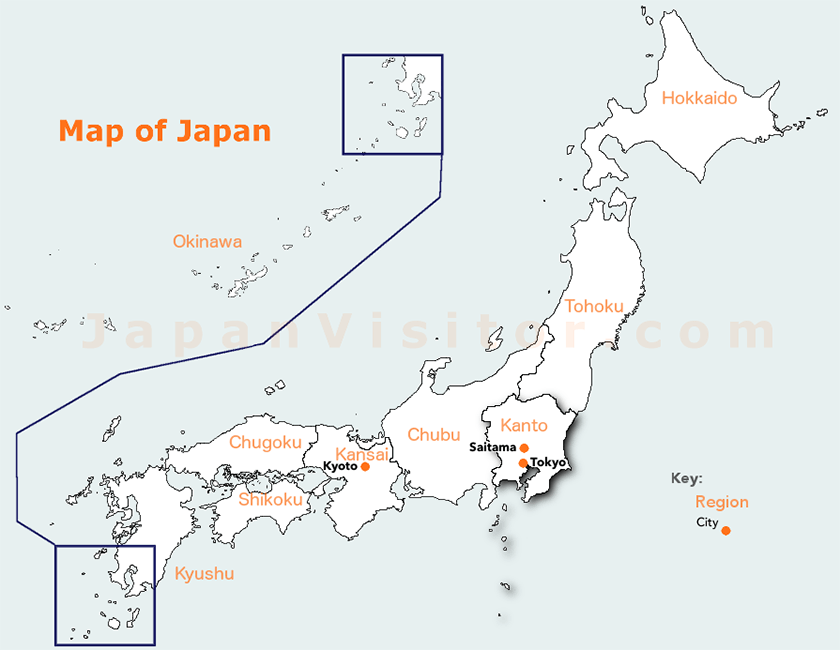 Ueno Zoo located in Tokyo’s Ueno Park is the oldest zoo in Japan.

A guide to five of Tokyo's best swimming pool complexes, indoor and outdoor, that include lots of fun water-related activities and entertainment, ideal for the hot summer months.