Miyazaki is the prefectural capital city of Miyazaki Prefecture. Miyazaki city is a pleasant seaside town popular with people on vacation and a fun place to base yourself to visit the many attractions the prefecture has to offer.

Miyazaki is the prefectural capital city of Miyazaki Prefecture on the south east coast of Kyushu. This is the largest city in the mainly rural prefecture with a population of over 365,000 inhabitants.

Miyazaki city is a pleasant seaside town popular with people on vacation and a fun place to base yourself to visit the many attractions the prefecture has to offer.

This tropical town, famous for its palm trees is very popular among surfers and even was the favorite destination of newlyweds for their honeymoon in Japan until the beginning of the 1980s.

Miyazaki enjoys the most sunshine hours of any city in Japan and visitors come for the relaxed atmosphere as well as the castle towns of Aya and Obi, the scenic Nichinan Coast and the sub-tropical island of Aoshima. Inland is the scenic gorge, kagura dances and Shinto shrines of Takachiho.

Modern day Miyazaki Prefecture was divided among a number of clans (domains) during the Edo Period (1603-1867) including the powerful Shimazu clan based in Kagoshima to the south, the Nobeoka clan to the north around the modern town of that name and the Sadowara and Obi clans.

The town of Takachiho, in Miyazaki  Prefecture is connected with the myths surrounding Japan's creation at Amano Iwato Shrine, where the sun goddess Amaterasu was found hiding in a cave by Tajikarao and enticed out by a comic and bawdy dance by Ameno-Uzume, thus creating the world. Moreover, the beautiful Takachiho Gorge, about four hours by car or bus from Miyazaki attracts tourists from all over Japan.

Miyazaki is also associated with the mythical first emperor of Japan, Jimmu. The Emperor is supposed to have lived in the 7th century BCE and legendary site of his palace was placed in modern-day Miyazaki. Moreover, the Kibana-jinja Shrine is said to have welcomed the goddess Ko-no-hana (symoblized by the cherry blossom). It is there that she would have given birth to the sons of her husband: Ninigi no Mikoto, grandson of the goddess Amaterasu and grandfather of the Emperor Jimmu.

In 1940 the Hakko Ichiu pillar was constructed as part of the celebrations of the 2,600th anniversary of the mythical founding of Japan. The 37m-tall tower is now (incongruously) part of the Heiwadai-koen Peace Park. Hakko Ichiu ("Eight corners of the world under one roof") was a slogan adopted as part of Japan's growing colonial expansionism in the 1930s and 1940s.

Other celebrations of this nationalistic "anniversary" in 1940 include the enshrining of the Emperor Komei, the father of Emperor Meiji and the last Japanese monarch to permanently live in Kyoto, in Heian Shrine.

Miyazaki's attractions are mostly of the modern kind and include a number of worthwhile museums.

The Miyazaki Prefectural Museum of Nature and History is situated in the grounds of the shrine of Miyazaki Jingu close to Miyazaki Jingu Station. This shrine is located in a huge wooded park which includes two other shrines: Gosho Inari-jinja (with its dozens of small torii) and Gokoku-jinja. This Museum is surrounded by the open-air Miyazaki Prefectural Museum Minka-en, where four original rural dwellings, some of them over 200 years old, have been relocated from the hinterland of the prefecture to this location.

Also called "Cosmoland", this Science Center is right across from Miyazaki Station. The Miyazaki Science Center displays an impressive 40m-tall model of a Japanese H-1 rocket outside the building. Moreover, inside the facility there is a scale model of the Apollo 11 spacecraft, which landed on the moon in 1969.

Other facilities at Miyazaki Science Center include a handicraft workshop, a space lab, an energy circus dedicated to alternative energy and nuclear power and a 6m-tall glass dome looking at the power of tornadoes.

The 27m planetarium at Miyazaki Science Center is one of the largest in Japan and has three shows on weekdays and four shows on weekends and Japanese national holidays. 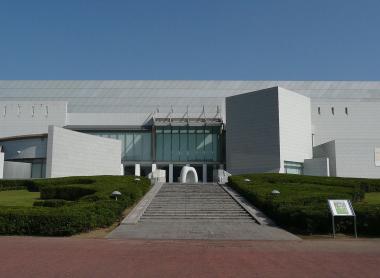 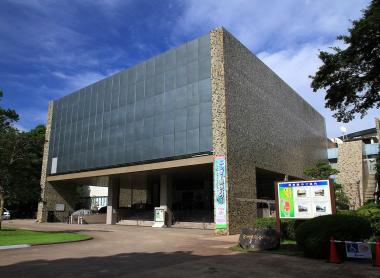 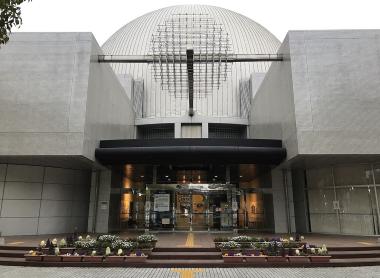 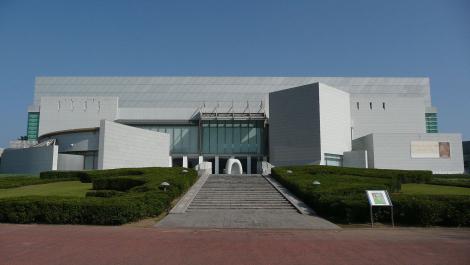 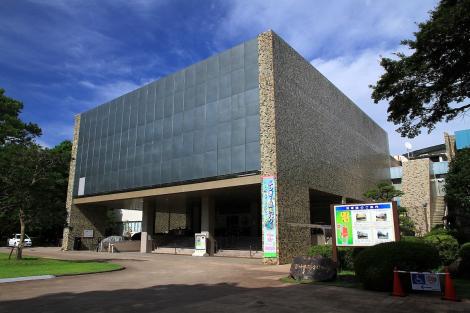 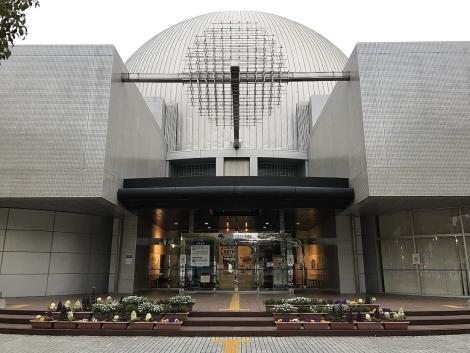 This is a multi-functional concert hall and theater space with performances of Western classical music, musicals as well as Japanese musical genres. This Arts Center is home to Japan's largest pipe organ and is located in Miyazaki Culture Park.

Miyazaki's principal festivals are the Yabusame or horse-back archery held at Miyazaki Jingu in early April, a huge fireworks display in August over the banks of the Oyodo River, the Miyazaki Jingu Festival in October and the new Erekocha Matsuri with parades on Tachibana Dori around the end of July.

The aptly-named Phoenix Seagaia Resort is what remains of the original 1990s Seagaia Resort, which went bankrupt when the Japanese economic bubble burst in 2001. Restructuring of the massive seaside resort involved closing Ocean Dome, at the time the world's biggest indoor water park and artificial beach.

The resort now has onsen hot spring baths, hotels, shops and restaurants, a zoo, golf courses and tennis courts. Hotels at the complex include the 154m-tall Sheraton Grande Ocean Resort, the Sun Phoenix Hotel and the condominium-type Luxze Hitosuba. The golf courses at the Phoenix Seagaia Resort include the Tom Watson GC, designed by the man himself, the Phoenix Country Club and the Phoenix Golf Academy.

The quiet places of Miyazaki

Tachibana Park lines the banks of the Oyodo-gawa River south of Miyazaki Station and is particularly attractive at night when the park's signature palm trees are illuminated.

The Heiwadai-koen Peace Park, which offers a splendid view of the city and its surroundings, contains the former Hakko Ichiu Monument, now the Peace Monument, built with stones from around the war-time Japanese Empire. The park also has a collection of reproduction clay haniwa sculptures in the Haniwa Garden from the excavations of Kofun Period tombs at Saitobaru.

Miyazaki Jingu is dedicated to the mythical Emperor Jimmu and the shrine grounds are full of pleasant woods and roaming semi-wild chickens.

Miyazaki Shrine hosts a number of festivals throughout the year including a demonstration of yabusame - horse back archery.

Further north of the city, Eda Jinja, nestled in a pine wood, is dedicated to the divine couple: Izanagi and Izanami, god and goddess founders of Japan.

About 15 kilometers from Miyazaki, Aoshima Island is Miyazaki's flagship destination. It can be reached on foot over a bridge or by tuk-tuk!

This small Island with a circumference of 1.5 kilometers is distinguished by the strange rock formation surrounding it. They are nicknamed Oni no Sentaku-ita, "the devil's washing boards" because their bumps and hollows are reminiscent of the old wash-house boards. These rocks eroded by winds and tides also line much of the southern coast of Miyazaki.

The local shrine, Aoshima Jinja, is dedicated to the Kami (shinto deities) Hoori, Otohime and Shiotsuchi-no-oji. Nestled in the middle of a tropical forest, it is much visited by couples.

In front of the island, Aoshima beach welcomes bathers. A small part of the beach is supervised in summer. The rest of the very long beach is less frequented, except when the waves attract surfers, who come from all over Japan and even from all over the world.

There are several hotels along the coast near Aoshima.

Access : Take the JR Nichinan line and get off at Aoshima Station.

Miyazaki Station and the Ichibangai entertainment area are the best places to shop and pick up local souvenirs. The Miyazaki Prefecture Products Shop Konne (Tel: 0985 22 7389) has clay haniwa, tetsumugi textiles, fruit and vegetables including yuzu, shochu and kagura masks from Takachiho.

Miyazaki is the transportation hub for Miyazaki Prefecture.

The JR Nippo Line runs to Kagoshima (2 hours) and Beppu (3 hours) from Miyazaki Station. The JR Nichinan Line has trains to Aoshima (30 mins) and Obi (65 mins). The Umisachi Yamasachi Limited Express is a sightseeing train that runs from Miyazaki Station to Nango along the Nichinan Coast on weekends, national holidays and selected holiday periods.

It is possible to buy a bus pass for 1500 yen in front of Miyazaki train station and visit Aoshima and Udo Jingu which are on the same line. It takes one day to enjoy both sites because buses are not very frequent. In summer, you can also get off at the Futô stop to enjoy its very nice little beach.

Miyazaki Car Ferry has daily sailings to Osaka Nanko Port leaving at 7pm and arriving in Osaka at 7.30am the next day. From Osaka, boats leave at 6.45pm Monday - Saturday and at 6pm on Sundays arriving in Miyazaki at 8.40am the next day on the 500km route.

There is a charge of 2,000 yen to transport pets in a special pet cage provided either by the passenger or the company. Bicycles and motorbikes as well as cars can all be transported.

Travel to Miyazaki with a Regional Japan Rail Pass

Our tours in Miyazaki