The dynamic center of Shimane

The old samurai houses and teahouses mingle with ancient canals, making it a romantic and endearing regional capital. Matsue is endeared as "the city of water" amongst the Japanese.

Matsue is the capital of Shimane Prefecture on the coast of the Sea of Japan., and has a population of almost 200,000. The city is located on the Ohashi River on the shores of Lake Shinji (Japan's 7th largest lake) and is famous for its beautiful castle. To English-speakers, Matsue City is of interest for its close connection with the life of Lafcadio Hearn, the Greek-born, American author who settled and became a naturalized Japanese citizen. His writings about Japan offered the Western world a glimpse into a largely unknown but mysterious and fascinating culture at the time. Blessed with its environment, Onsen hot springs, mountains, and beaches are all within easy reach from Matsue.

Matsue City is located on the Ohashi River between Lake Shinji to the west and the saline Lake Nakanoumi to the east. This lake- and riverside location has earned Matsue the nickname of "city of water."

Most of Matsue's attractions are located north of the main JR Station and can easily be covered in a day or two of sightseeing.

Everything there is to know about Matsue: history and evolution

The capital of Shimane Prefecture, Matsue is a city of history. Remodeled in the early seventeenth century by the local Daimyo (warlord) and great strategist Horio Yoshiharu, the city was reputed to be impregnable. The Horikawa, accessible canals, were, at the time of their construction, strategic facilities to slow the enemy in case of an attack. Today, they have become popular attractions offering a pleasant boat ride through its network.

The horikawa protected, among other things, Matsue Castle, considered one of the best-preserved medieval castles in Japan (it is among the last twelve medieval castles still standing). The building is the cultural center of the city, where many come to admire the canals. However, its gardens are also particularly appreciated for its cherry blossoms during hanami, as well as for its camellias and Japanese azaleas.

Originally founded in 1889, the city was passed from hand to hand over the centuries. Harusato Matsudaira, scholar, and master of the tea ceremony, ruled the city from the late eighteenth century to the early nineteenth century through its modernization. It was then that Matsue became particularly famous for its culinary specialty of clams, but also for its seafood and the fresh fish caught in Shinji lake, where fresh water and seawater meet. People come to attend the numerous tea ceremonies given there, but the city also attracts Shinto worshippers due to its proximity to Izumo, a great religious center.

The city has long welcomed numerous samurais, protectors of the Matsudaira family, and the beautiful Buke Yashiki, former home of samurai, bears witness, as does the tea pavilion Meimei-an. Both buildings are located in the historic center of Matsue, north of the castle on Shiomi Nawate street. 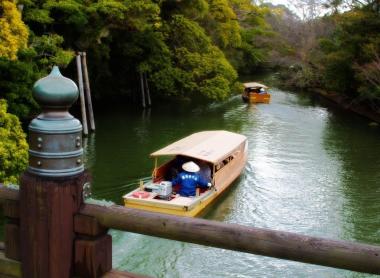 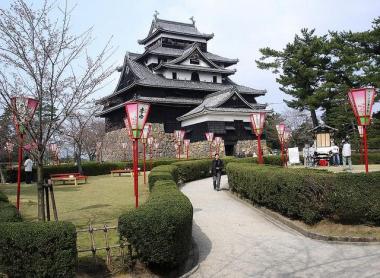 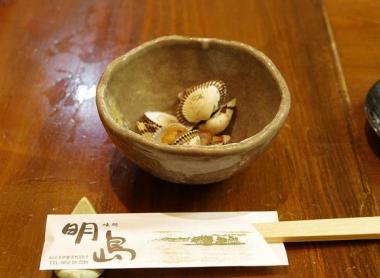 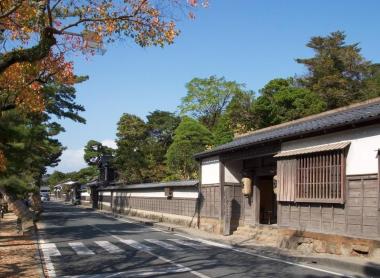 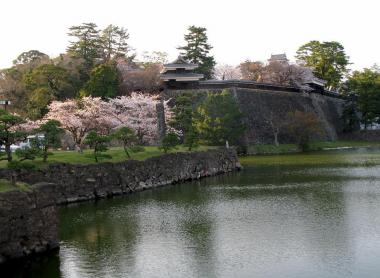 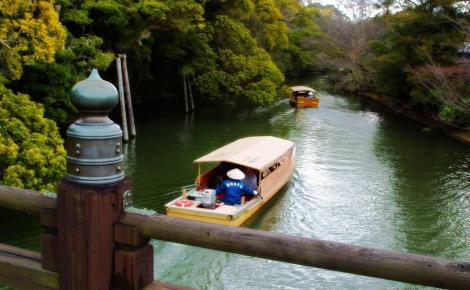 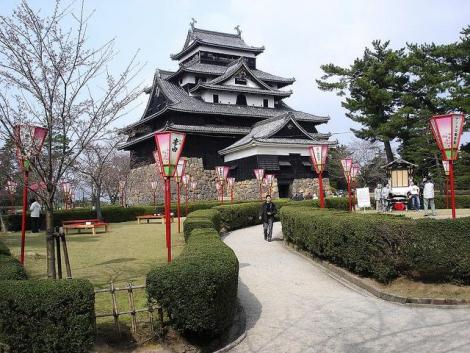 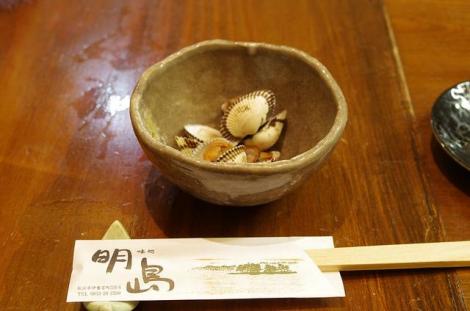 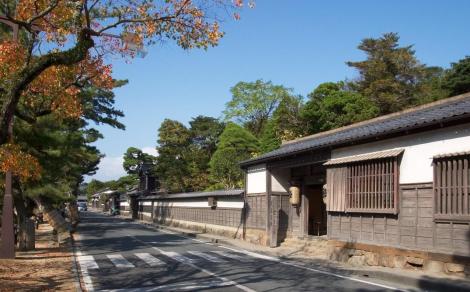 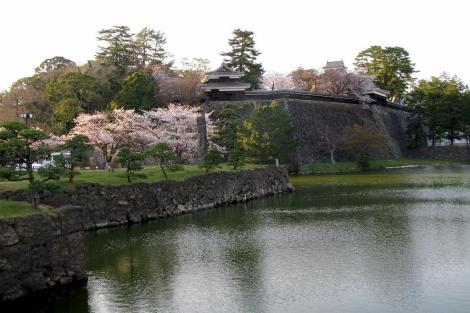 The city's main sight is Matsue Castle (Matsue-jo), which dates from 1611 and is one of only a handful of castles in Japan that has not been destroyed by fire or war. Stronghold of the Matsudaira clan, the black-painted wood of the castle's watchtower gives a menacing effect to the six-story tower.

Matsue Castle has the second-largest donjon (watchtower) of all the twelve remaining original Japanese castles, is the third tallest at 30m, and the sixth oldest. Inside are displays of arms and armor and the original shachi (mythical dolphins) on the castle's roof. From the top floor of the castle, one can enjoy a panoramic view over the city and surrounding area including Lake Shinji.

Things to see and do in Matsue

Matsue is intimately connected with the life of author Lafcadio Hearn (aka Koizumi Yakumo), who spent the first year of his sojourn in Japan in this city.

Across the canal from Matsue Castle is Lafcadio Hearn's Old Residence - a delightful, small samurai house and garden, where the writer lived from May-November 1891. It was in this house that Hearn began writing two of his most famous books: Kaidan, a collection of ghost stories, and his classic, Glimpses of Unfamiliar Japan in which he describes many of his experiences in Matsue.

Virtually next door, in this area known as Shiomi Nawate, is the Lafcadio Hearn Memorial Museum, which displays a selection of Hearn's original manuscripts, the writer's desk, quills & inkpot, and a number of his beloved Japanese tobacco pipes.

On the same street is the Buke Yashiki, the house of a samurai named Shiomi, which remains in its original form constructed in 1730. Visitors can peer into the tatami rooms and walk the garden. The Shiomi family were the chief retainers of the lord in Matsue Castle.

On the grounds of Matsue Castle is the Meiji Period Matsue Kounkaku, a Western-style mansion dating from 1903, which infuses Japanese design with western architecture. Matsue Kyodokan was built for Emperor Meiji, who in the early years of his reign conducted six grand tours of Japan. Many towns in Japan built elaborate places for him, hoping for a visit. However, unfortunately, the Emperor never visited Matsue.

The castle grounds, known as Jozan Park are wonderful in the cherry blossom season and also contain Jozan Inari Shrine, Lafcadio Hearn's favorite shrine, and home to hundreds of fox statues, both ceramic and stone.

The Meimei-an Teahouse dates from 1779 and is considered one of the best-preserved in Japan. The entrance fee includes Japanese tea and a traditional sweet. The Tanabe Art Museum displays a fine assembly of chadogu: tea bowls and utensils connected with the tea ceremony. The museum was established in 1979 and is formed from the personal collection of Tanabe Choemon XXIII, a former prefectural governor of Shimane.

Two new museums close to Matsue Castle are the Matsue History Museum and the Matsue Horanenya Museum. The Matsue History Museum is housed in a modern Edo Period style building with exhibits focused on the 400-year history of this castle town and its connection with the tea ceremony. The Matsue Horanenya Museum explains Horanenya - shinto festivals that take place on boats. Rather than parading the kami in their mikoshi around the local streets, they are carried in procession by a series of brightly decorated boats with dancers and musicians on board.

Nestled against a wooded hillside in a quiet neighborhood about 800 meters from Matsue Castle lies Gessho-ji Temple, the family temple of the Matsudaira clan, lords of Matsue Domain.

This is the final resting place of nine generations of lords who ruled over Izumo and Oki for a little over 200 years. The tenth and final Lord of Matsue moved to Edo (Tokyo) after the Meiji Restoration of 1868 and was buried there. A run-down Zen temple already stood here in 1664 when the Matsudaira's took over the domain and castle from the Horio Clan and renamed it Gessho, which means "lit up by moonlight" which was the name of the mother of Matsudaira Naomasa, first Matsudaira lord of Matsue.

Situated on the shore of Lake Shinji, Japan's 7th largest lake, and with the large Matsue Castle canal (horikawa) connecting to the Ohashi, Kensaki, kyōbashi, Yonago, and Kitada Rivers, known as the "City of Water."

The waterways of the city are appealing and contribute to the ambiance of the city. One of the best ways to see Matsue's sights is by boat, and there are three points around the town where one can board the Horikawa Boat Tour: at the Otemae Pier in front of the main entrance to Matsue Castle, the Karakoro Hiroba Pier near Kyōbashi Bridge south-east of the castle, and Fureai Hiroba Pier, north-west of the castle. The entire trip takes 40 minutes, though one can get off at any point and rejoin later.

Yuushien Garden is a classic Japanese garden on the small island of Daikonshima in the Nakaumi lagoon near Sakaiminato. A beautiful place to take a stroll, Yuushien has three traditional Japanese restaurants serving food with local ingredients.

Matsue Vogel Park is a huge bird and flower park just one stop on the Ichibata Railway Kitamatsue Line heading west from the final stop at Shinjiko Onsen Station in Matsue.

To the northeast of Matsue is Shichirui and the Meteor Plaza. This strange building, designed by Shimane architect Shin Takamatsu, houses an indoor seawater swimming pool, a 500 seat auditorium, and the ferry terminal to the Oki Islands as well as a museum dedicated to a 6.8-kilogram meteor that landed in 1992.

Back in town, the modern Shimane Prefectural Art Museum is located on Lake Shinji, west of the station, and has paintings by Monet, sculptures by Rodin, woodblock prints by Utagawa Hiroshige as well as works by contemporary Japanese artists. The museum is an ideal place to catch the spectacular sunset over Lake Shinji.

20km east of Matsue in Yasugi is the recommended Adachi Art Museum, a private museum founded by businessman Adachi Zenko in 1970. The Adachi Art Museum showcases contemporary Japanese art by such artists as Kawai Kanjiro and Yokoyama Taikan, set in an award-winning Japanese garden - frequently voted best in Japan. Take the JR train to Yasugi Station and an hourly shuttle bus to the museum or a direct bus from Matsue JR Station (50 minutes).

Gassan Toda Castle Ruins are just 2km away from the Adachi Art Museum and easily accessible.

North of the town are onsen hot-springs around Matsue-onsen Station served by the Ichihata Line which runs north of Lake Shinji to Izumo. The Tamatsukuri Hot Springs is to the southwest of town and is home to some of the oldest onsens in the country, operated by local hotels and ryokans.

Jozan Inari is the home of the Shikinnen Shinkousai Festival, one of the three greatest boat festivals in Japan, with more than 100 decorated boats. The festival only occurs every 12 years with the last one being held in May 2009.

an, we often forget that he was born far from the country and Koizumi Yakumo was an alias, linked to naturalization. Born in Dublin to a Greek mother and an Irish father, Lafcadio Hearn traveled widely in France, the United States, Guadeloupe, and finally to Japan, where he became a professor of English in Matsue and fell in love with Koizumi Setsu from a Samurai family, whose name he took.

Well assimilated into Japanese society, he wrote about legends of the Matsue region and several essays on Japan. The house he occupied on Shiomi Nawate street is now a museum providing insight into his life and work. Today, Lafcadio Hearn remains the patron of goodwill to the English-speaking world, including New Orleans, United States on which he has written endearingly. There are indeed similarities between Matsue, the city of water, and New Orleans where bayous are far and wide.

Lakeline Bus with its distinctive retro look paints an interesting picture for Matsue city in Shimane. The Lakeline Bus starts from the JR railway station and follows a loop around the city stopping at all the major tourist spots in the town.

After leaving the station the bus passes the Horikawa Boat Trip boarding point and then heads to Matsue Castle. As it circles the castle grounds, it stops at the new History Museum and the Lafcadio Hearn House before heading out to Gesshoji Temple.

Our tours in Matsue